I’ve mentioned in the past that I’m a big fan (and happy customer) of the H.M. Dignam Corporation, which is a company that sells (mostly) inexpensive rural land in Canada. Outside of having amazing deals on land, they have wonderful terms of sale, which I’ll mention a few of:

I’ll give you a few samples from this month’s catalog so you can see what I mean. Seriously, if this is interesting to you, subscribe to their catalog — you’ll be like a kid in a candy store dreaming about your early retirement to your homestead. Here’s a property on Cape Breton Island, Nova Scotia — a part of the world that the Scottish settlers described as the most beautiful land they’d ever seen when they arrived (and GQ Magazine’s #2 North American island destination). It’s about half way between the bridge to the island and Bras D’Or lake, and is fifteen acres for a three thousand dollar down payment and then $318 a month. 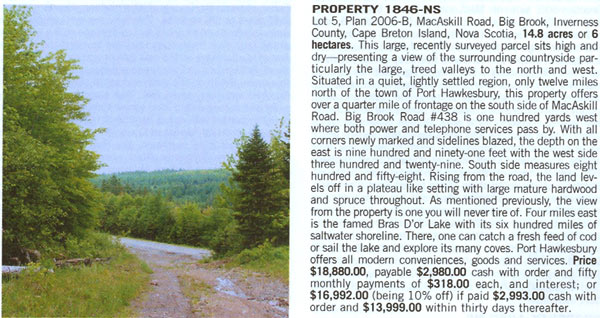 You can also get incredibly cheap land in Northern Ontario. I’m not really sure that I’d personally want to live as remote as Cochrane, Ontario, but at least if global warming floods the coast lines, it’s a very safe place to be and there are plenty of moose to eat (if it’s your thing, subsistence hunting is very much an option, and you can sell blueberry-moose sausages to rich folk in the city and live like a king — or just make pine needle tea)! This property, 150 acres of mixed land with a big 10 acre pond and a river flowing through it is $5,660 down and then $620 a month, and is fairly typical of what’s available. 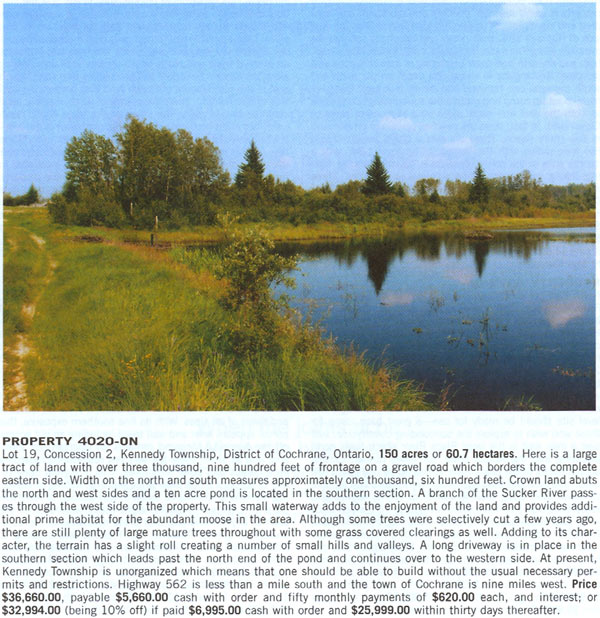 The cool thing about places like this is that there are no building codes or zoning, meaning that if you want to build a sand-bag house or an earthship, you won’t have to fight with building inspectors that don’t know anything about alternative construction methods — so not only can you buy the land for almost nothing, you can get away with building something that costs almost nothing.
Maybe you’re thinking that both of those places are far too remote? Even land in Southern Ontario can be had really inexpensively. This property is just north of where I used to live in Tweed, Ontario is on the Trans-Canada Highway, so it’s about two hours from both Ottawa and Toronto, and about half that from Kingston, all major cities. The picture is actually one that I took on a branch the river that flows along the northern border of this property. 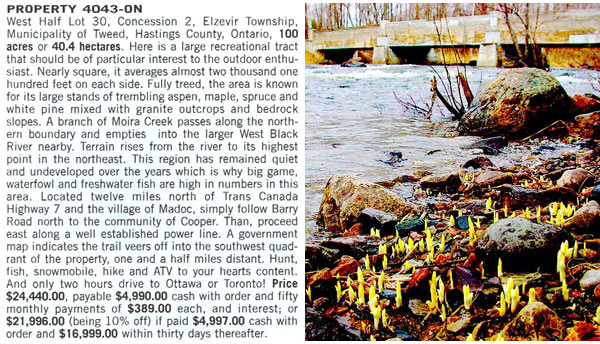 And yes, I know, even that property is a little remote if you’re used to being able to stumble out to the 7-11 at 3AM for your dinner, but the hillbilly freedoms it comes with are a more than equitable trade… And if you build your own home and grow a lot of your own food, you really can live the good life on work that you can do over the Internet or by telephone (assuming you can’t generate money or find a job locally). 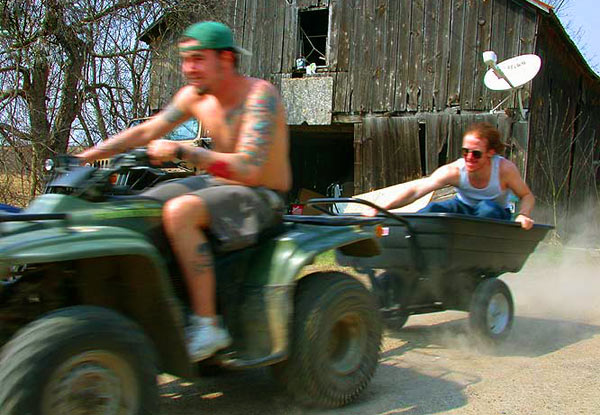 I had a chance to do a bit of painting today and started laying in the base coat on Tikikaiju. This painting will be for sale when complete, along with a custom frame. Other than that, my plan until dawn includes Guitar Hero III… 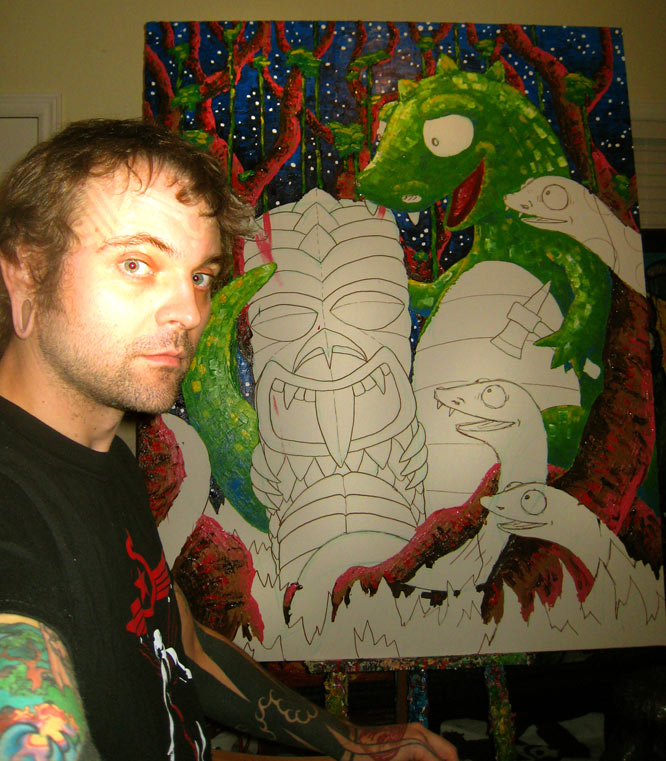 As well as our small kite, all the kitesurfers were out at the beach today — about a dozen of them plus that again on windsurfers were racing across Cherry Beach. There are a lot of amazing things in this world that we take for granted, and the wind is one of my favorites. How many oxen on ropes does it take to budge the oak tree that the wind effortlessly rips from the earth? How static would the world be were it not for the wind? But still, especially in the period of my life I’m going through right now, I think of Winston Churchill’s observation that “kites rise highest against the wind, not with it,” and welcome the wind in my life — as cold and bitter as it may be — that brings much needed change. 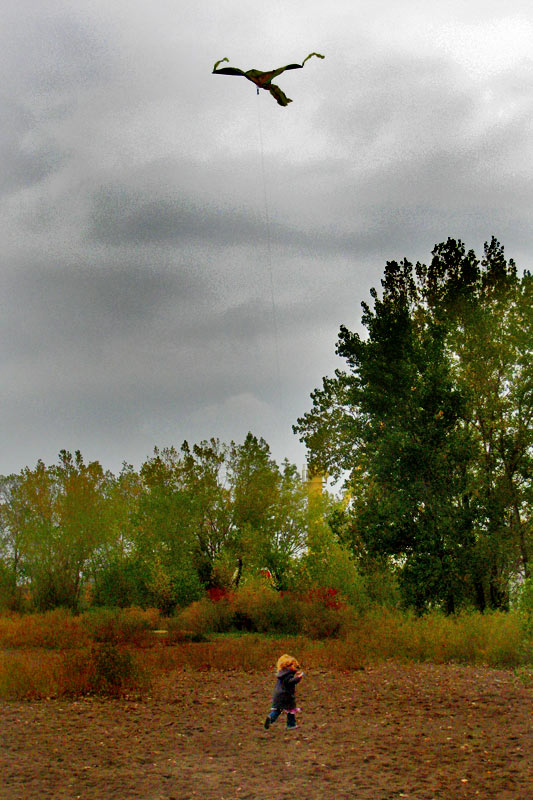 I sketched out the plan for Tikikaiju – Godzilla having just finished a large tiki version of himself in the jungle, as the snakes look on approvingly. It’s being painted on a quite large 48″ x 60″ canvas. It is being painted for sale, so the final piece will be a little larger since it’ll also have a custom frame. 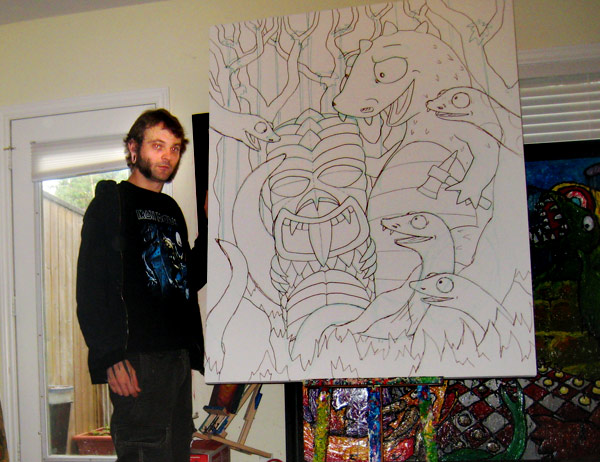 One of the things I do to both pass the time and to bribe my daughter to eat all her veggies and such is drawing; drawing as a pretext for storytelling. Storytelling is probably the only thing that truly differentiates humans from animals (or so I guess — we’ve made such false assumptions before) and is certainly what holds cultures together and defines them. Sometimes I illustrate the process of creating the food we’re eating. For example, a few nights ago we had a dish that included wild rice and shrimp, so we were talking about Ojibwa culture and what wild rice (manoomin) meant to them, as well as the process of de-veining a shrimp and preparing it for human consumption. 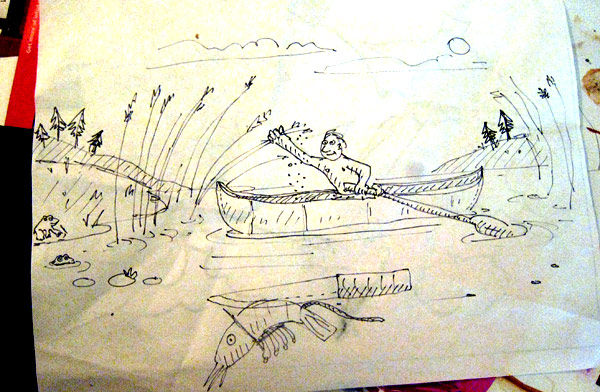 That said, admittedly it’s generally just funny little drawings and stories on junkmail envelopes… I must have hundreds of these lying around the house (that’s both a reflection on how much we draw and how little I clean I suppose, heh). 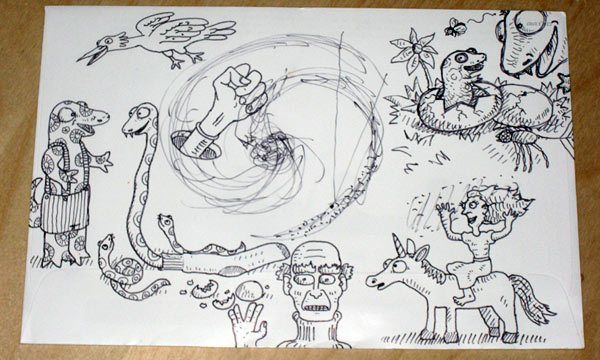 A friend of ours is having twins and her baby shower is today, so we used these scraps to make her a card over breakfast. 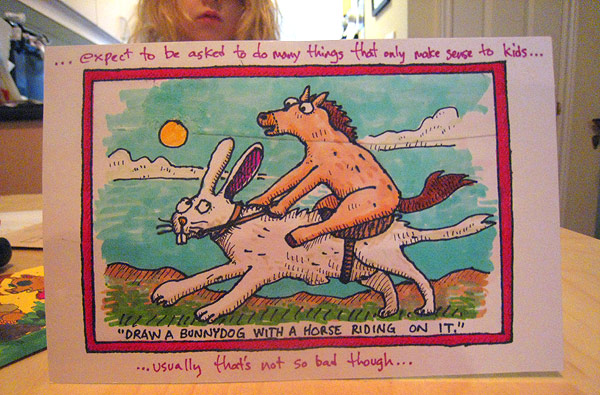