It's not really anything new, but I uploaded a few videos from ModBlog and Uvatiarru to Google Video. You can find them by searching for the keyword BME. 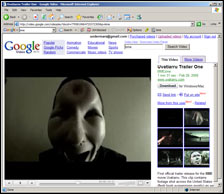 If this is more convenient for people, I can start making this a habit?

I'm in grade three or something?

It sounds silly I imagine, but I really love these glowing stars I stuck all over the ceiling. The picture below is roughly what I see when I look up at night (it wasn't easy getting my camera to take that photo). I took a very brief relaxation break between jobs and listened to Music For Egon Schiele (a soundtrack album by the band Rachel's) in the dark… 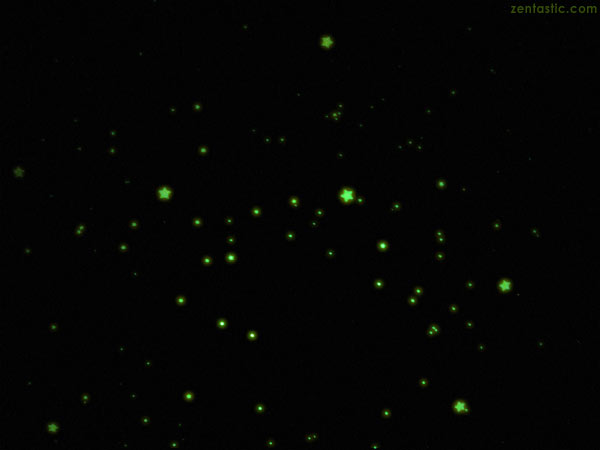 Even though they're just simple star shapes six feet from my head, the illusion of space and depth is surprisingly convincing if you let yourself slip into the fantasy.

Nukes, abortion bans, and peak oil: Not so bad!

As you probably know, South Dakota is on the verge of criminalizing abortions — last time I checked, bills had been passed by both the House and the Senate (in slightly different forms), so it's only a matter of time. After they pass the bill, they get immediately sued by a pro-choice organization, and the matter goes to Bush's newly formed Supreme Court which appears poised (at least that's the fearmongering of the moment) to allow it to be a state-by-state issue.

So it is possible that within the year abortion will once again be illegal in large parts of the United States… Most people I know are pretty upset about this, but I propose that it could turn out for the best.

First of all, in order to institute the ban in the first place an important political shift back to States Rights has to happen since this is being treated as a state issue not a federal one. I would suggest that one of the problems in the US right now is the massive power held by the federal branches of the government. Shifting some of that power back into the States has the potential to keep in check some of the abuses that have happened over the past half-decade… So by pandering to anti-abortion interests, this administration may have sacrificed quite a bit of power.

Additionally, on a cold an objective level, an abortion ban would be instrumental in maintaining the United States's positive population growth levels (I think the only one in the Western World — no European country or Canada even comes close). Most first world nations have negative growth curves (ie. the average couple has significantly less than two children, causing population to drop), which has the end result of an aging population that needs to be supported by an increasingly small work and tax force — meaning large scale immigration is needed to keep the economy healthy.

That said, an abortion ban also has devastating effects. Poverty levels in the lower classes climb radically, and the lower end of the middle classes are bumped down a notch on the economic food chain due to having more children and less control over family planning. This would bring increased attention to the class war and social crisis in America, as well as bringing attention to much needed universal healthcare in the US — and create a larger voting block that would demand it.

And, in the end, I believe that the State-wide abortion bans would be defeated given time. Maybe I'm being way-over-the-top optimistic, but I think the end result of an abortion ban (just maybe) could be stabilization of the American political system and the introduction of more socially positive governance. Yeah, that's pretty optimistic…

So it looks like Iran is fastlining to nukes. You may remember from past posts that they have delivery systems (ICBMs with about a 6,000 km range developed with North Korea, Mach III Sunburn cruise missiles from China), complete documentation on building nuclear weapons (care of Pakistan), a trigger mechanism (400 tons of high explosives obtained from Iraqi sites unsecured thanks to the US invation), and nuclear fuel that's currently being enriched in centrifuges… So they could be within six months of having nuclear capability across the range pictured below.

It's not looking too good for Israel, but to be honest, I doubt they could accurately hit a target in France or Germany… So their ability to strike back is fairly limited. To continue with my opinions, I also would be very surprised if Tehran was ever motivated to first strike anyone — it's not at all in their best interests, and they are far from stupid. The issue as I see it is “what if” the weapons fall into the wrong hands — but really, I'm a lot more worried about that in Russia and America than I am in Iran… So my opinion as to “what to do” is largely in line with I think the game the Russians are playing: instead of threats and boycotts and embargoes, helping out instead to develop a peaceful nuclear program.

That said, since when is the Bush administration for peace?

The thing about going into Iran is that they're well equipped and have a standing army of something like six million people over a large geography. They are an immeasurably “tougher” target than Iraq — a broken nation hobbling along with a shattered economy, a rusted and rag-tag army of a few hundred thousand people and no equipment… The only way to ensure a victory in Iran is a large scale nuclear strike that basically levels the nation.

France has quietly agreed to commit to such a strike — and American propaganda that France is a weak nation of cheese-loving surrender monkeys aside, remember that they are armed to the teeth with nukes and one of the largest weapons dealers on the planet. The US as well is running a new series of underground nuclear weapons tests in order to roll out a new suite of “usable” nukes ready for action in this upcoming megawar (which would send an intense message to North Korea I guess).

The plans are all in place, so I suppose now it's just a waiting game… Do we descend into madness or do we come to our senses and get along? Personally I think it'll probably turn out fine, but you never know. I think Russia will work with Iran to develop a peaceful nuclear power program, which will them push electricity out across the nation improving quality of life. With this will come communication, education, worldliness (the Mohammed cartoon fiasco has shown more than anything else, that the people we need to worry about are simply grossly uninformed as to how the world works), and perhaps in the end, peace. A nuclear Iran coupled with a nuclear Israel could escalate the conflict to the point where it becomes nonsensical and ends.

Wait, am I slipping back into optimism?

Well, since I appear to be, let me add that I also think “Peak Oil” is a good thing and not something we need to fear. Running out of oil (or let's say oil prices spiking) is going to be the best thing that's happened to this planet in quite a while. Right now transportation (which is energy intensive) is quite cheap, meaning that if an item can be made cheaply in a given location, it doesn't matter much if the destination market is thousands of miles away. So right now if I go to the grocery store (even in the summer), the food comes from Mexico and elsewhere.

With high transport costs, the farther away food was grown, the more it costs to the consumer. This applies to all items (clock radios, toilets, chairs, everything)… So one change you will start to see is localized production, so the money you spend circulates in your local economy rather than centralizing in the coffers of a megacorporation. This has the end result of revitalizing regions that have been decimated by the effects of globalization, and equalizing income across the world rather than allowing profit to conglomorate in increasingly small groups.

Another thing to consider is the changes to means of production. For example, a current megafarm (where a single corporation owns hundreds of thousands of acres, rather than thousands of family farmers owning a hundred acres a piece) manages to work by replacing a significant number of farm workers with large pieces of (gas powered) equipment. It's currently very costly to run, but less costly than having to employ all the humans that it would have taken. However, as oil prices rise, the big machinery starts to lose out against smaller methods of production. The balance of power shifts back from large farms and large equipment to small farms and traditional methods.

So peak oil not only localizes a great deal of production, but also creates jobs and takes away power from some of the corporate monsters that have been eating away at our humanity… to say nothing of the reduction in pollution and other problems as the shift happens.

Oh, and to finish off this optimistic entry, I'll give my prediction for who's going to win the Presidency of the United States in 2008: Al Gore. Yeah, that's my prediction. I think he's the only Democrat that can win at this point and do a good job. Oh, and I think that they'll put Obama up for VP, but I'm not as sure about that sub-prediction.

Nice long day today, but no work! I got up early to Nefarious's singing so we got up and did a little building and I think watched Go, Diego, Go. I cooked a small breakfast but I can't at all remember what it was… After that some more playing and I got dressed up warm and walked out across the bridge to the diner to have breakfast with Michael and Saira and her friends. Nefarious and Jon joined us as well (they came later so I could order her food ahead so there'd be no wait), and then Marty and Phil also. 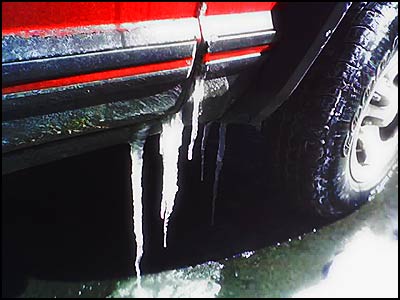 After breakfast Jon went gaming and the rest of us went to Home Depot to get a jigsaw, and then to Office Depot to pick up a color laser printer (it's insanely heavy)… We dropped off Phil, and then when we got home the saw was used to cut about 2″ off of the bottom of the DVD shelves (the basement has a drop ceiling that I didn't calculate for)… It's a far from perfect job but it worked and I think they look alright. Definitely better than the alternatives.

Jon cooked supper (mahi-mahi and vegetables) and we watched the flaming finale of the Olympics and The Simpsons, and Marty left. Exciting day? Not really, but nice, and relaxing. Sorry about the boring entry — I was told today that I was a good writer by someone reading this, so now there's all this pressure to actually produce something of value — but what can I say? Resolution fulfilled.

I had Ronan hit my inner finger tattoos this afternoon (who is on my short list of recommended local artists). I'd say they lost about 2/3 of their ink (if not more), so today we pounded it a lot harder than last time… I think my next experiment is going to involve first dermabrading the skin with a dremel or something to get rid of all the thick skin (ie. to make it like tattooing any other part of the body). I don't know if that's a good idea or not — has anyone tried it? 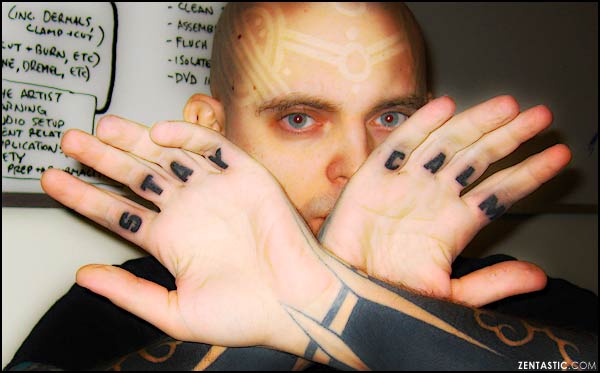 I should have an update posted later tonight as well… and it's a big one!