Does this mean we're winning?

Interesting new statistics out (thanks to lancer1969 for the tip):

Those results, via CG&C are from studies by the Mayo Clinic and Harris Interactive. Think of the implications. A slim majority of educated people now have piercings, and a quarter have tattoos, with (apparently) the general public having even higher numbers (over a third), the tide is most definitely swinging toward a world where freedom of expression has taken control of society.

I think all of you know that this story was an April Fools prank, but working on this week's updates today I remembered that there are actually several couples that I've documented that have “matching amputations” (although none that got them quite so impulsively). Here for example is one couple that's taken off four toes between them:

There's a Mexican couple that I've documented here as well, although in that case, the guy chickened out and only she got the amputation done! No regrets though…

Got these photos of Ondrash at Bohemian in New Zealand and the Czech Republic doing a scarification using a technique sort of half way in between strike branding and cautery pen branding. Interesting Dead Ringers-esque tool he's made for himself…

So as some of you may have seen there is a massive and heated debate happening on Allen's page right now (link to forum) about whether the APP should allow member piercers to use jewelry other than internally threaded in fresh piercings. The core of Allen's argument I think is that because externally threaded jewelry is so much cheaper (for good reason; most of it is imported junk of deeply questionable quality made in Asian sweat shops), making this small change would allow the APP to quickly build up more members (in many shops, the jewelry is the decision of the profit-oriented shop owner, rather than the piercer).

Here's a quick run down of the types of threading being used on barbells, and the pros and cons of each as I see them. I've personally manufactured each type over the past ten years, and have been pierced with each type multiple times as well, so while I have a bias, I'm not talking out of my ass.

That's how I see it. Others may see different pros or cons, and may not agree with all of mine. I think it's fairly obvious that when we're talking about 14ga and 12ga jewelry, I feel that step-down (aka drop-down) threading is the best design, and that standard external is the worst design.

Personally I would definitely not want to see APP-grade piercers using bottom-of-the-barrel import jewelry for fresh piercing. I think it's bad for the clients and I think it reflects poorly on a piercer that's willing to cut corners like that. Anyway, since Allen's forum has been primarily for debate between piercers on the subject, I'd like to pose the following questions to pierced people about their experiences with different types of jewelry design:

…and anything else you think would be helpful. Thanks!

Do people trying to scam free memberships not even look at what they're sending?

A photo of my nipple piercings, done by Gary at Angels in Edinburgh. 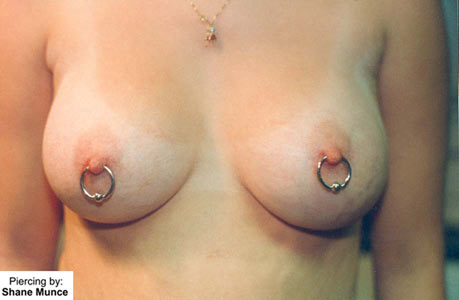 Thank you, I have mailed your password to Gary. You can pick it up at the studio in three to six months. Please feel free to contact me if you have any further questions or concerns. Enjoy the site,

Other than that I wanted to be clear about something from my earlier post: I am not quitting drinking, I am not joining that fucked up “accept a higher power” AA cult (seriously, fuck Bill W), and while I appreciate the support in letters I've gotten, I'm not looking for that. Thank you everyone who's written me, but I'm not going straight edge, and I'm not joining any cults.

To avoid further confusion let me be clear: I enjoy drinking and I plan to continue doing it, but I've let it get out of hand, to the point where it's not healthy and not fun. I'm “rebooting” myself on this issue so that I can enjoy it again. I am not interested in any 12-step programs or anything else of the sort. I just want to have my drinking back at a healthly and positive level, rather than an overbearing compulsion that I'm using as a crutch. Positive, not negative or forbidden. Nothing more, nothing less — just positive.