Sorry for not getting this up earlier today — my dunebuggy had a full-on electrical failure in the parking lot of the CCC (the supermarket) and I lost some time dealing with that. I think it's just a loose cable or something (or I left the lights on).

Anyway, I know that some of you have been enjoying the little romance-drama on Gillian and Clive's pages… Since they're both part of the new BME staff for 2005, I thought that this might be a good opportunity to kill two birds with one stone and both introduce them to those of you who don't already know them, and post what I think is a very charming (and surprising) body modification romance tale.

Click the photo to jump to the article now…

“Behold I do not give lectures or a little charity.
When I give, I give myself.”

So yesterday the RFID implant article got picked up by Gizmodo, Slashdot, and a growing list of other blogs in various flavors. The funny thing is that BME is so big that it didn't even put a dent in our bandwidth or server loads… I always get weirded out when sites — including what one assumes to be bigger sites — get taken out by “the slashdot effect” or get “farked”. It makes me wonder what incompetently set up (or already overloaded) sort of server they're running… that said, I got lucky and years and years ago a very smart friend (who is now a professional clown among other things) set the standard for how the BME server had to be configured.

Anyway, in relation to that story, I thought this fearful eye into the future was worth linking: Police in Malaysia are hunting for members of a violent gang who chopped off a car owner's finger to get round the vehicle's hi-tech security system.

Other than that, I'm prepping (yet another) BME/News update for later, as well as an experience update, and wanted to comment on this older article on Kuro5hin: Pharmaceuticals and the Death of Art… I know I create my best art — and computer software — when I'm in the depths of madness or inebriation (or both). But more to my point, I'm sure nearly everyone reading this knows a creative and brilliant person, whether they be an artist or an engineer or something in-between, that's been struck down in the name of normality by psychiatric drugs and counseling.

You know what? By definition, not once in the history of mankind has a normal person ever done or created anything worth noting or recording. Never.

Normal people mean nothing and achieve nothing more than animals or plants, and the drive to make people “normal” or like everyone else is the pretty much the worst thing we could possibly aim for. It's bad enough that we try and convince people that it's a good idea to pretend to be normal, but actually forcing it through the application of drugs, counseling, and even neurosurgery is despicable.

Note: The odds of a normal person reading this blog are basically zero. If you think I'm insulting you in this entry, I'm probably not. However, if you're currently wishing to define yourself as “normal”, I may have a certain disdain for you because you have not yet embraced your otherness. Throw off the shackles of the mundane and awake!

Bring on the anger…

…because the previous entry didn't make you mad enough! 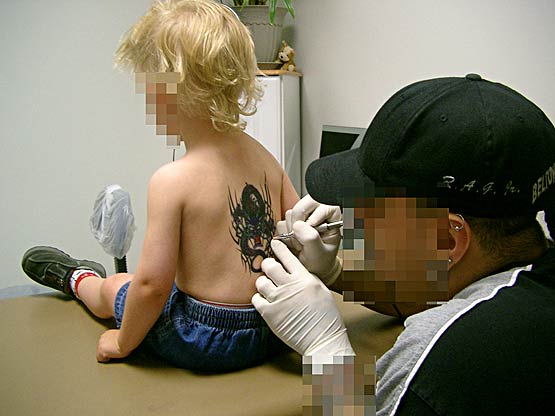 For whatever reason I've been getting a lot more Nazi and white power skin-themed tattoo submissions than usual this week. Below are a few that have been sent in over the last couple days (although I think some of them are ripped off from various online neo-nazi forums).

Now, I have no intention of changing the rules for IAM which exclude this sort of thing, so this question is exclusively for the galleries on the main site. The question is: Should I include pictures like these in the tattoo galleries, and if so, should they be sorted separately or included in the main sets? After all BME does include other things that I (and most people) don't politically agree with.
Nazi tattoos? What do you think? (tons)
Comments (6)

Via one of my favorite piercers, Kivaka, I got the following deeply disturbing picture of Crazy Dave's tattoo on top of, well, whatever that bulge on the top of his head is… Like some lumpy villager right out of a Bruegel painting or something it's going to haunt my nightmares, but as disturbing at it may be, I sure am glad I live in a world where people have a sense of humor about life.