Just got this email. I can't vouch for it one way or the other but maybe someone here is interested… If anyone here lands the job let me know how it goes.

I am not currently a member of your site, but I am pretty heavily tattooed, in addition to being a piercer and one-time local shop owner. I now work in marketing, and have an opportunity for a person/shop to make some extra money and get some exposure.

I am working with a company that is producing a nationwide TV commercial for a VERY well known national camera and film company. They are seeking someone with a heavily tattooed face, preferably color. It is possible to enhance the color, as I know it is hard to maintain the vibrancy in the facial area, but the linework must be exceptional. I dont have much time (shoot starts Friday!) to produce this individual, so I am seeking alternative avenues for the right person or persons. If there is anyone you know, or any of your members that might be interested, please do not hesitate to contact me. Thank you for your time.

Thanks to everyone who came up, it was nice seeing you even if it's hard to stay connected as a group in a zoo with kids running around. Anyway, here are two photos that Rachel took of me (she shot some very nice portraits of others there as well; I think you'll be happy)…

Warning — those are pretty big images (about 200k).

I've just uploaded lots of new pictures to the site (2,684 images). Thanks to all the contributors as always and to MissAnnThrope for being the cover model. I've made one small change to the gallery index layout (that I'm not entirely happy with):

All that does is let you flip between sorting the galleries in default last-updated order, or in alphabetical order… Alphabetical makes it a little easier to quickly find a specific gallery of course.

As I said though, I am really not entirely happy with the current gallery and gallery index layout, and think it desperately needs a fairly major overhaul. Some of the sections have too many galleries to effectively display, and most are just not easy to navigate. If anyone wants to create mockups of alternate layouts I'm very open to feedback (I'm not interested in suggestions without mockups though, sorry). Because of the wide range of gallery types and contents, I think I may have to bite the bullet and go with nice custom layouts for all of them, or at least partially custom layouts.

I'm also debating splitting the ritual section back into ritual and culture again, and then breaking up some of the mega-galleries like the BBQ area so that each event can have its own gallery… There are also issues as to how to handle artist galleries in the scarification section, suspension group galleries, and so on. I need to get caught up on this before the signal to noise ratio becomes too poor to keep the rebuild manageable… hopefully I can make the changes using my old legacy code, without too much rewriting.

Since I'm talking about “all things August 24″ in this entry, it's also the 342nd anniversary of Britain's Act of Uniformity (which was signed on the eve of the 90th anniversary of the massacre of the Huguenots, killed for being Protestant) which forced state religion on the people — and state religion sucks, and there's no religion, no matter how “peaceful and loving” that hasn't become corrupt when applied on a large scale. That said, it's not all bad — it's also the 190th anniversary of Canada burning down the White House back in 1814 (after the Americans burned down Toronto, so don't get too cocky ya silly hosers), as well as the 14th anniversary of Judas Priest being found not guilty of the death of some kids in a suicide pact due to their lyrics.

Since a lot of people here and elsewhere got re-interested in Chernobyl from the KiddofSpeed motorcycle journeys (which later turned out to be somewhat “embellished”, if that matters), I thought I'd link to this interview with Alexander Yuvchenko, who was on duty at Chernobyl the night it exploded. To stay on trend, Chernobyl is in the Ukraine, and today is the 13th anniversary of Ukrainian independence… and I live in a Ukranian neighborhood — wow — I feel like I'm playing six degrees of Kevin Bacon “today-in-history” (IAM is also a Ukrainian community).

PS. 10,000,000+ Americans to die soon when US coastlines are devastated by the collapse of the Cumbre Vieja volcano (I mention this today because today is the 1925th anniversary of Mount Vesuvius's eruption, as well as the 18th anniversary of the less destructive Cameroon eruption)… But will it happen before oil hits $182 a barrel in the immediate future? Well, at least with rising poverty slavery is a great business to be in… better than drugs and guns these days!

Oh, and if you want to know why I'm smarter than you, click here… oh, wait… maybe not.

My main video array (all FireWire 800) is now up to 1.5 TB, with another 0.5TB in internal and USB 2.0 drives. I know I haven't answered those of you asking me “when's the movie coming out”, but I don't have an answer for you because it's one of those things where I think I'm going to be chipping away at it for a very long time … but it is still underway. 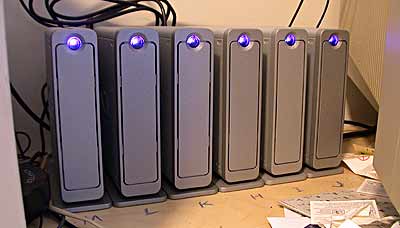 In other news, Rachel and I will be in South America for the Sao Paulo (October 22-24) and Buenos Aires (October 29-31) tattoo conventions. I'm hoping to do lots of video interviews and coverage, and Rachel will be shooting the conventions of course. I have to admit I'm going to be super paranoid, but hey, if there's going to be a pre-election terrorist attack, South America's probably not a bad place to be.

Anyway, I'm off to the Cirque-us now.

Would this story be interesting to feature on BME? That is, do you want to see stories that are not really “about” voluntary body modification, but have enough cross-over that they're relevant and most likely quite interesting as well?

I saw a link for amputation, and i have a good picture, and maby a good story, I was doing construction work, using a miter-box saw. I was cutting a 45 degree angle out of a piece of crown molding. I am not sure what happened next, but some how my hand found its way under the saw blade. I looked down, realizing that the lower part of my hand was on the floor. Pervious EMT training told me to put my hand in a cold area, so I picked up my hand, and put it in a micro fridge. Using a shop towel, I tried to stop the bleeding.

After being flown to a Baltimore hospital after a 13 hour surgery my hand was replanted. This is where the pictures come from. The doctor took as picture before the operation. Any way its 2 years later and I am still missing a pinky finger, and I have 25% of mobility of my left hand. 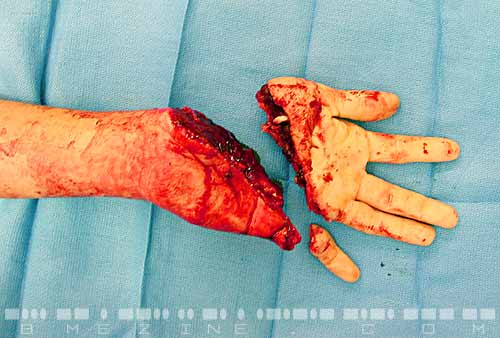