Continuing my weekend of providing evidence that the folks at the Cosmic Coincidence Control Center are finally looking at my case, my father's Jeep (with Harley and pitbull in tow) had it's computer die just around the corner from our place here. So I got to spend the day with him before he heads out of town (and out of country — America, Mexico, and Cuba) on a huge road trip (and I got to see his new hand tattoos) where he'll also be doing some writing and shooting that I hope we'll develop into something very interesting. 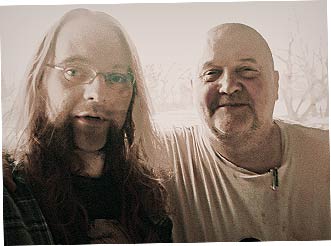 (Bad picture of me, but…) if you see someone on the road that looks kind of like a bigger older version of me with a dragon on one hand and kanji on the other, be sure to say hello. Or more!

Anyway, time to spend some time with Rachel now.

The Australian wires are carrying news reports which basically boil down to this: “The Australian Medical Association warns that branding will result in permanent scars!” Oh no! (more, more)

We met up with ManWoman (need some art?) and his daughter (her opera opened last night in Toronto so he's in town) for lunch in Cabbagetown, which was nice because I haven't seen him since NIX a few years back. A great guy that I always enjoy seeing, and we picked up copies of both Gentle Swastika and Homesick for Eternity.

L-R: Nefarious, Rachel, Me, ManWoman, Serena (ManWoman's daughter)
We then went over to see the new Urban Primitive tattoo spa — one of only a few in the world right now, although I suspect it will become far more normal. That was cool too because I don't think I've seen Raven and Daemon in literally six years.

People usually either really love them, or really hate them, at least in the local tattoo community. Myself, I have a lot of respect for the boundaries they're pushing in this business, and more importantly I appreciate any tattoo artist that develops a real style of their own that is recognizable (in the same way that I really like artists like Lukas Zpira, Ryan Ouellette, or Ron Garza, all of whom have instantly recognizable characters to their work).

We weren't able to stay long, but maybe that was destined to be because on the way home I ran into another very old friend that I haven't seen in perhaps ten years (I don't think listening to him on the radio counts). Anyway, I'm wiped out, seeing everyone was nice but there were so many strangers too and it's really getting increasingly hard for me to deal with listening to stupid people think. Sometimes I wish I couldn't hear all that crap, or at least was better able to filter or control the process.

PS. For those of you who like 60s retro albums, I highly recommend the new All Night Radio CD (it's the new project from the Beachwood Sparks people to put it into context).

I don't get a lot of photos of this particular type of play, so you may not have seen it before. If you click the below you'll get an animated GIF of the procedure (I've blurry the dongage, so it's sort of safe for work).

As you know I got tattooed this afternoon. Nothing exciting, just blackwork filling on my left arm (the tattoo that we started eight years ago or something like that), but it's always nice to get to see Shane. I rode public transit (I don't really enjoy driving unless it's in one of “my” cars, and they're all off the road right now), which I enjoy doing because it gives me a chance to explore other people's consciousness in a different way than I usually have the opportunity to. I finished up just before three, which meant that the subway ride home was full of 15-16 year olds.

There was a gaggle of them standing about fifteen feet from me for most of the ride, incredibly loud and obnoxious, but harmless. Just being boisterous kids mostly, but with an emphasis on the loud and obnoxious part that I already mentioned. A bunch of older people were making rolly-eye faces and commenting with stuff like “thank god those aren't my kids” and “kids are so rude these days”. These kids really divided the older people on the subway into three groups: those that didn't care one way or the other, those who thought it was funny, and those who had no tolerance for it.

A couple of older people actually yelled at them, and then the kids lost it and just cackled madly and started insulting these old people like crazy, making fun of them for working (“at least I don't work in a pantyhose factory, or is that too hard for you because you're too old to tell colors apart?”), for being old, and so on. I thought it was pretty funny on the whole, I don't know why the old people got so worked up. Young people are loud. They were probably loud when they were 15 too. BFD.

But what was interesting is one of the kids made a comment about subway jumpers (I think it was “isn't it weird that they never say 'suicide', just 'we have a jumper'?”), and the kids got really serious and shifted to a conversation about how wrong it is to tease people, even if you don't like them, and about how easy it is to push people into depression. It put a really different spin on their tormenting (teasing) of the old people (which was a retaliatory act, and, from their point of view, all in good fun).

Anyway, I've got an update to finish, and since no one but me and Leeta are home today we don't have to be embarrassed to be blasting The Technicolor Web of Sound.