One of our neighbours drives this sort of “Hummerized” Jeep. I thought it was an interesting conversion. I'm not sure if it's a Jeep CJ that's been heavily modded, or if it's a less modified J-20 style truck, but it's pretty cool looking.

Other than that, I like the war comic below. Click to read more. I found it via Drawn!, an excellent illustration blog that you should definitely check out as well.

Three hours to do a reboot after security patch install? Refusing to answer the phone? Saying that you need our login and password because there's “been a problem and the techs are working on it” when in fact no one is even at the colo facility and all the box needs is someone to push the reset button? Telling us we can't talk to the techs because “none of them speak English”? Faking cell phone static when you accidentally answer the phone? Saying you're located in Europe when we've been to your facilities in Toronto in person?

My friend Fingazz from way down south in Santiago, Chile (who I bumped into at the 2004 BSAS convention) just did a scalpelling on this person — you can see the full set on his page — but the “before” photo is so neat looking that I wanted to share a picture of it here. 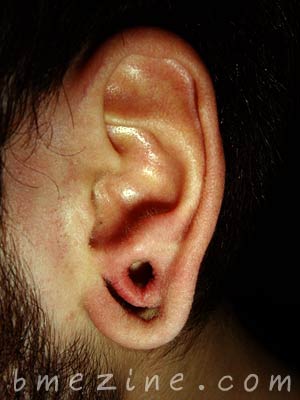 This one is trickier I think…

Usually my “do you know what you're looking at” tests are not particularly difficult if you're familiar with BME content. This one though I think will be more likely to stump people? I'll update the entry later today with the answer.

(OK, trick question: this is actually a photo of a friend that's a hermaphrodite.)
Comments (0)

Once again, Zecharia Sitchin's predictions come true and NASA has finally discovered the 12th planet the ancient Babylonians knew as Nibiru — twelth because the Sumerians and Babylonians counted the sun and the moon in their “planetary” numbering. I guess that means we're on schedule for the Mayan calender's end in 2012 coinciding with the return of the Anunnaki? I know we live in interesting times, but the question now is just how interesting are they? 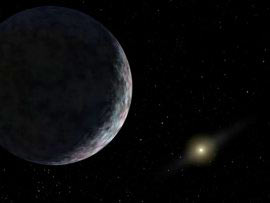 "The Nefilim were upon the Earth in those days and thereafter too. Those sons of the gods who cohabited with the daughters of the Adam, and they bore children into them. They were the Mighty Ones of Eternity, the People of the Shem."
"...we saw the Nephilim, the sons of Anak, which come of the Nephilim: and we were in our own sight as grasshoppers, and so we were in their sight."
- Genesis 6:4, Numbers 13:33

Yeah, laugh it up all you want, but nearly every mythology on this Earth describes not only the 12th/10th planet, but also its civilization and those “gods” past interaction with our own evolution.