Only Nixon could go to China.

A la the title of this entry, how would people feel if I did a review of the new wave of piercing guns? I'm really split on it, because I believe for at least one or two of them, my review, at least on a technical level, would be positive (ie. “it works and is safe”). Am I better off saying nothing? 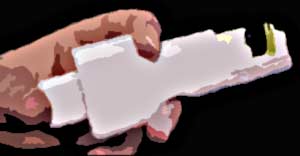 What if piercing guns finally work, at least for the “basic” piercings? I've seen guns that I'd trust on ears and noses, and I'm hearing about new ones that should do a solid job on navels, nipples, and so on. I can argue against them for social reasons, but the other list or reasons is shrinking.

OK, I think I'm going to take all the big text off the front of the shirt. That can go on the back, leaving a nice clean front. I think this way prints nicer in multiple colors of shirt, although it's still a pretty hellish job for Ryan. Anyway, here's what I'm thinking:

For those that are wondering, the car is a Chaparral 2D, part of a very cool lineage of racecars. There was briefly even a kitcar based on this body, and it's always been one of my favorite designs.

I've just uploaded another image update (I think about 800 pictures). I was going to write a Memorial Day related article to go with the cover photo, but to be honest, I didn't want to come off the wrong way on it so I'm saving that article for Independence Day which is more up my alley anyway. Thanks to everyone who helped out on this update, and remember, old sailors never die… they just get a little dinghy.

Other than that Phil and I headed down to the FAME Fitness and Model Expo (don't laugh, we saw more hardcore body modification there than I've seen at the average BME BBQ). My brother is there helping promote arm wrestling and I got introduced to so many people who've held the world championship! We also bumped into my “godsister in law” (Nefarious's godmother's sister in law) and hair guru, and then on our way out bumped into the foks from Dr. Pierce who make an ear piercing gun.

No, we didn't get into a fight. To be honest, after looking over their product it really seems like they've done their research and it addresses the vast majority of the problems inherent in “automatic piercing tools”. I definitely do not support it, because I think socially it has the potential to do real damage to this community. But piercers, pay attention to this trend! Piercing guns are getting better and better, and they are expanding the number of procedures they can safely do.

Those who forget history (folklore?) are destined to repeat it.

If there's an interest, I can pick up a few of these devices from them and do breakdown and review of them. Phil's volunteered to take a few shots for the team so we can learn about the enemy.

Also, since people are asking me about it, I'll answer the three main questions related to IRC/LiveChat transition and the changes that are ongoing (and will be for at least a week or two as the puzzle pieces all get painted and assembled).

1. Petitions to go back to DigiChat


I am not going back to DigiChat, and it's not up for debate. I'm phasing out the server that it's being hosted on because I don't want to spend the $295 a month. I also don't want to pay the $500 to $1000 required to upgrade the software to the current version. I just didn't feel it made financial sense to throw that much money at this, when I could be donating it to suspsension groups and so on instead.

That said, DigiChat does offer hosted solutions starting at about $500 a year that would probably meet the needs. If someone wants to take the initiative and pay for that and host it, I'm certainly happy to link to it for those who are vehemently opposed to IRC… but so far IRC seems to be really making more people happy.

I should also note that there will be a web-based (ie. browser plugin) version of this (IRC) chat as soon as we've had a chance to test and play with a few and see which one we'd like to recommend. So if your problem is more “I can't figure out IRC”, it's just a matter of being patient for a few more days.


This chat is an extension of IAM and BME. It is there to provide a social and support outlet for people who might not find it elsewhere. So yes, that means that the rules of IAM on the whole do apply there quite literally. We're not aggressively moderating it because there's a two-day log being kept and ultimately if people don't want to use it in a civil manner, it'll be treated the same as a fight in a forum here.

Again, I'm not interested in fighting about this. If you don't like that philosophy, don't use the chat. #bmezine is usually on public channels and I'm sure it's a free for all where you can complain about me being gay or whatever else the current complaints are. But BME is here to help people, that is and always will be its core goal.

BME is supposed to be a safe place where a very diverse group of people can get together and interact in a secure and protected environment. Yes, I know that IRC is all about flamewars and trying to hurt other people, but that is not what BME is here for, and I'd very much appreciate it if you don't feel you can separate your desire to make people unhappy from IRC, that you choose an IRC that isn't linked to BME.

That said, don't be a baby about it or treat it like some kind of zero-tolerance police state. People do occasionally argue and fight, especially in an online live chat environment. The real test of character is if you can still be friends at the end of it.


Well, given that the new chat is free (the minimum amount of access time from a tongue piercing photo is 13 months — 1 month of original access, and then a full year after the initial account expires), I'll repeat what I told the first person to make the complaint:

In any case, I hope that helped explain my position on these issues a bit.

So the US (he's CIA connected) and UK (MI6 there) have decided to make Iyad Allawi the new ruler of Iraq, and the cowards at the UN have backed it as well. Anyway, to put Allawi into context, he's the guy responsible for the big “WMD attack within 45 minutes” lie that got Bush and Blair in so much trouble. Now Ashcroft is blabbing on about a new terror attack in the US based on his typical “credible” sources… in this case, the Abu Hafs al-Masri Brigades, a group which basically publishes hoax websites and has zero field capability. Oh, and remember Pat Tillman, the guy that walked away from a 3.6 million dollar NFL contract only to be killed in Afghanistan? Well, it turns out he was shot in a “misunderstanding” that's now being labeled a friendly fire incident.

So I guess Pat Tillman died to give the military machine some feel-good press. There have been so many fucking lies in this war game that it wouldn't surprise me if they simply executed him to take advantage of his story. It wouldn't be the first time.

It's so sad. Every war, young idealistic people line up on all sides to fight to protect their way of life. Everyone thinks they're fighting for freedom. Do you think the Nazis were fighting because they were evil? The idea is laughable. The individual soldier pushing bodies into the ovens did it because he believed he was doing what he had to do to protect the freedom and liberty of his compatriots. Just like Americans think. Just like Iraqis think. Just like every slave who's ever been tricked into murdering his friends to serve a wealthy government master.

I'm sure you've seen the photos of the latest terrorists that they've been showing. White kids some of them — the “new face of al Qaeda” I've seen headlines scream. Sure, there are messed up kids from middle-class neighborhoods joining Islamist terrorist groups. But the real threat to the US government is from local militias made of of real Americans, real Americans who haven't forgotten that the reason America was founded was to get away from this bullshit. That's what they're prepping you for. If they can rebrand Nick Berg, a guy with al Qaeda ties that had been investigated over 9/11, as a “patriotic Bush-loving Jew”, then they can rebrand Tim McVeigh as a buddy of Osama's.

I know it's more of an Independence Day quote than a Memorial Day weekend quote, but I'd like to remember what Patrick Henry said on March 23, 1775.


It is in vain, sir, to extenuate the matter. Gentlemen may cry, Peace, Peace-- but there is no peace. The war is actually begun! The next gale that sweeps from the north will bring to our ears the clash of resounding arms! Our brethren are already in the field! Why stand we here idle? What is it that gentlemen wish? What would they have? Is life so dear, or peace so sweet, as to be purchased at the price of chains and slavery? Forbid it, Almighty God! I know not what course others may take; but as for me, give me liberty or give me death!

I think Pat Tillman was an honorable guy who died trying to protect the freedoms he believed in, and I think that's an amazing thing. But what saddens me to my core is the knowledge that in fact he died oppressing those freedoms instead, tricked by a greed-driven enemy that controls the pawns on both sides. Just another human destroyed by an immense money making machine.

When your country asks you to kill the slave of another country, will you recognize your real enemy?

As if I wasn't having a long enough day already, I just realized I miscalculated just how much the paint would contract on the canvas I'm working on. The frame I built has totally buckled and I'm going to have to remount it. Anyway, I'm going to take the crap factory out for a walk, hopefully someone tries to pick a fight with me. I'd love an excuse to get my hands bloody.

Hell, my hands are always bloody. 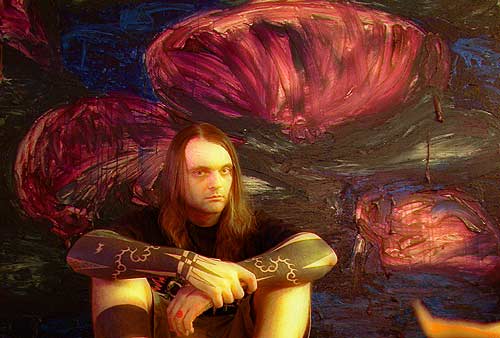 That's not a painting. It's an undercoat at best. I paint all paintings three times, once for every element of the trinity. The holy ghost lays the foundation and the underlying power. The father provides the wisdom, guidance, and education, but the son turns it all into art and lights it on fire.

My job is mostly to sniff the fumes.