The web directory (which stores photos on IAM) overflowed today so some people may have gotten errors posting pictures to IAM or trying to submit pictures to BME. I've cleared up almost fifteen gig of free space (which will be used up soon again since I don't restrict people's accounts) so we're OK again now I think, and the RAID array will be expanded next week.

Sorry for the inconvenience!

Well, I'm going back to our New Year's mini-BBQ now (and some wrap-up on the year end stuff). It's Rachel and my fifth anniversary of meeting in person (we'd known each other online for some years before). Watch tomorrow for the year end posting!

The following picture is here to test drive space availability only: 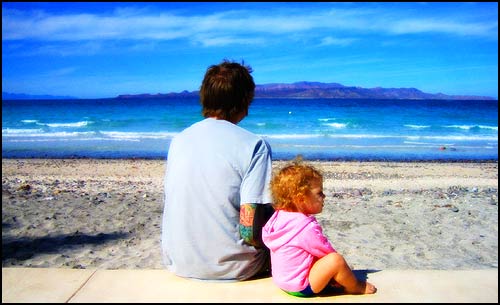 My sister (who's also an IAM member) just sent me this picture of me (on the left), her (in the middle), and my brother (on the right). I'm thirteen in the picture, she's three, and my brother is (I think) eleven (he may be twelve). Here's two more recent shots of him by the way. 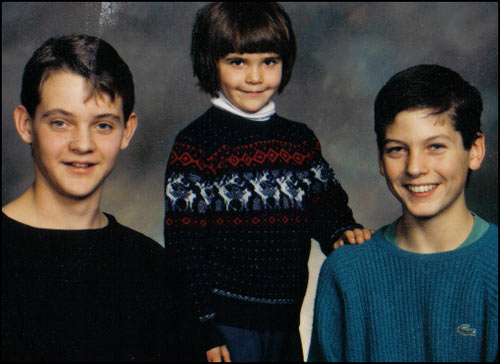 Yeah, you can tell who the good looking normal one of the bunch is and who the crazies are by their expressions, ha… Just kidding, no one in that photo is normal! It's neat to see my sister though at the same age as Nefarious (our daughter) and catch the evil-gene similarities in their look!

Well, back to crunching numbers for the year-end stuff… On the first I'll announce who I've selected to edit the QOD book as well as all the regular winners — as always, the categories will change slightly from the previous year, and Rachel has given me the financial go-ahead to give away a very cool grand prize! But who will it go to?

Shaitan cares not for freedom!

If you were to judge someone's moral character, would you judge them by what they say, or by their actions? That is, if a priest gives a wonderful sermon on kindness to your neighbor, and afterwards rapes one of the choirboys, is he a good man or an evil man?

US President Bush has painted the nebulous “war on terror” as a war between good and evil ideologies, a battle for freedom and democracy — an armed defense of human rights. So I think it is fair to judge the validity of the underlying argument by the actions of the military spearheading it. You all know about the torture abuses, but I wanted to mention one that's being brushed under the rug because in some ways it's even dirtier: America's empire — like all empires before it — always has been and continues to be built on the backs of slaves.

Base pay for US military personnel starts at $14,400 (2004 figure). To put that into context, the starting salary at McDonalds in San Francisco is $17,800 ($3,400 a year more) — and that's assuming that McDonalds pay the minimum wage. The annual raise (as a percentage and as a gross figure) has consistently been smaller for US military personnel than it has been for the politicians that vote to determine both figures. But this entry isn't about radically underpaid troops and overpaid politicians.

As I'm sure you know from past debacles (like the recent $100,000 a pop sale of $7,500 Vietnam-era Jeeps), the military pays private companies a small (and undeserved) fortune for equipment. These days, as more and more workers are unemployed, and more and more people end up in the vast prison camps now housing millions of Americans, slave labor in US prisons manufactures much of the gear used by the overseas troops — and the CEOs of the companies take home millions.

But don't kid yourself into thinking the slave labor ends with felons who you may believe “deserve” it. Overseas, companies like DynCorp and Dick Cheney's KBR provide the US military (and anyone else who will pay) with security services, janitorial services, food services, and so on. Where the people who do these jobs come from and what they're paid is a deeply disturbing story — men and women are literally kidnapped from small villages in third world countries and sold to these corporations as slaves. Contractors have successfully lobbied to stop the US government from creating laws that could stop the practise. And again, the whole time the CEOs walk away with millions earned from slavery.

And that's saying nothing of the trafficking in underage sex slaves. 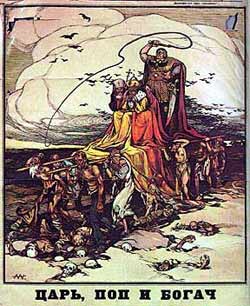 In any case, tell me, is the rapist priest a good man, or an evil man?

And what should his congregation do?

Rambling on about the Great Shaitan

So I was reading this morning about how atheists in America are banned from holding many positions of political import. For example, the Texas Constitution says that you can be “excluded from holding office” if you don't “acknowledge the existence of a Supreme Being”. Maryland says that to be a juror or witness you must “believe in the existence of God”, South and North Carolina both say the number one factor that disqualifies anyone from office is “denying the being of Almighty God”, and Pennsylvania and Tennessee go farther and say you must also believe in heaven and hell.

Feel free to tell me that these are old Puritan laws that no one has gotten around to getting rid of yet, but either way, for now they're still on the books at a Constitutional level. However, I've been giving it some thought, and I actually believe that the law should be amended (reversed) to say:


“Any person who acknowledges the existence of a Supreme Being and an after-life state of rewards and punishments for acts in life, is excluded from holding office or acting as a juror.”

Let me explain why I feel that people who are religious (or at least of a religion that believes in hell or another form of supernatural punishment that supersedes the laws of man) are unfit for public office:


A religious person who takes office believes in a set of laws that differ from the nation's laws, and believes that they come from a supernatural source that can not be validated by non-believers. This source is opposed to the wishes of a large percentage of people in this world (ie. those not of the same faith), but followers believe that to violate these laws is to risk eternal damnation, a worse punishment than any human can dole out. Thus a person who is religious can not be fundamentally trusted to do what is right for the nation or for all people.

Not that I expect many people in überreligious Saudi America to lobby for this kind of much needed change, given how backward and uninformed public opinion is in general these days… I hope one day it will change, but I was reading the latest Harris Poll this morning and the results are disturbing:

Hell, 50% of Americans still aren't convinced that Iraq didn't have WMDs. All of these facts are ones that can be confirmed as true or false with relative ease, but still, a large majority of Americans have beliefs about them that are not supported by objective reality. I have to wonder if this is laziness and apathy and media manipulation, or if its roots are religion — something like 85% of Americans claim to be practicing Christians. To put that clearly, 85% of Americans are willing to accept that the ultimate source of law is completely unconfirmable and supernatural in nature (but that there are “special” priest humans that can act as God's avatars), rather than the ultimate source of law being real world observations teaching us how best to make everyone in our society happy and fulfilled.

But let me give you something real to worry about (search for “Dr. Niels Skakkebaek” if you want to learn more on this subject). This is for all those people who think I'm wrong in singing the praises of the rural and organic lifestyle. In the last half century, sperm counts among humans have dropped by more than half, and ejaculate volume has dropped by a quarter — and the drop is escalating every year. Sperm banks are even having trouble finding men with counts considered healthy by WHO standards. Oh, and this isn't just affecting humans… It's affecting much of the life on the planet as we slowly kill Gaia.

And you thought the fact that we're almost out of oil as consumption skyrockets (and biofuels and other renewable energy likely can't even come close to meeting our current needs gluttony) was the biggest problem we're facing? Nope… Mass extinctions caused by polymer-based artificial hormones and other pollutants risk destabilizing the biosphere so much that in five hundred years the population of humans on this planet could be 1% of what it is now, if not less.

Well, as I've said before, if you're going to choose a time to be alive, choose the apocalypse because it's the most interesting.

In North America (Canada and the USA) it is generally not permissable for a cosmetic surgeon to perform a subincision. As has been explained to me by doctors, the basic reason is that subincision is not inside our cultural norms, and thus a doctor that performs it puts their license at risk. You might find one that is willing to ignore the rules, and of course there are “underground” practitioners that are unaffected by AMA standards due to not being doctors, but as a general rule it is reasonable to say that performing a subincision is not an act that a doctor in North America may do.

However, one of the fastest growing sectors in cosmetic surgery is not subincision, but hymenoplasty, in which the vaginal hymen is artifically reconstructed. The singular and stated goal of hymenoplasty is to cause “pain and bleeding during intercourse” for the woman, and many women stop enjoying sex for long periods after the surgery — and to continue being clear, that is the goal. One patient quoted in the linked article, a medical assistant, calls it “the ultimate gift for the man who has everything”.

And don't get me started on men who cut off part of the penis of babies and then suck out the blood with their mouths (search for mezizah). Yeah, that's legal too. Seriously, the evil shit that people do in the name of God disgusts me. If a loving God exists, you can bet that God is 100% into subincision on adults, but is likely not thrilled about mutilated babies and abused women.