I worked a bit more on The Blind Leading The Blind, building up the texture and making the colours a little less “flat”. Of course it’s in an unlined state right now, but you can see it’s much nicer than in the previous post. You can click it to zoom in, and after the break there are two projects that Nefarious did today — each is a portrait of Caitlin. 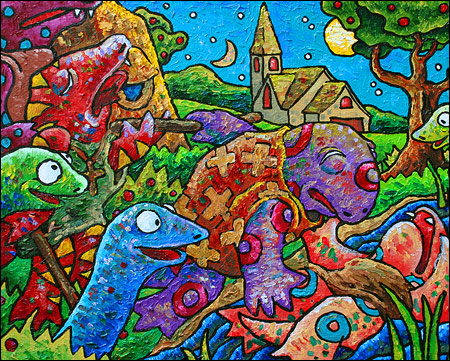 END_OF_DOCUMENT_TOKEN_TO_BE_REPLACED

More photos after the big frog.

END_OF_DOCUMENT_TOKEN_TO_BE_REPLACED

We went to the mall today and little remote control cars (pretty cool that they can make fully functional RC cars about the size of a Hotwheels) were $25 off, so we got the car and radio package for a whopping $4.96, picking up one for each of us. At that price, if someone wanted to build little robot projects, you’d be getting micro-servos, motor controls, and RC interfaces for far less than parts cost!

At the mall Nefarious also stopped at one of the kiosks that sells makeup and did herself up in clown makeup. I’m not sure if that sort of thing is frowned on or not but it was also quite fun.

We read for about two hours today, starting with the somewhat sad but beautiful “Blue Stone” by Jimmy Liao but the bulk of the time was spent reading “Trick of the Tail”, which has great illustrations by Tomislav Tomic and is nicely written as well — it’s shocking how hard it is to find good books, as most kids literature is complete junk. I shop at Another Story, which helps a lot as they’ve got a superior selection of stuff that’s quite hard to find.

Other than that I got my knee x-rayed again. Not too exciting but there’s some concern that there are going to be follow-up issues other than just nerve damage. You can see the lump on the side of the bone where the tumor was originally removed. I’m not sure how much of that is regrowth if any; either way it’s a very slow growing benign hunk of bone. It’s definitely not something I’m particularly concerned about, but I sure learned my lesson the first time around and if it’s something that needs intervention, it’s not going to happen after 15 years of pain again!!! (Duh!)

This freeware tool creates cropped thumbnails from an input file which can be either a local file (jpg, gif, or png) or a URL. Images are resized to fit inside a specified thumbnail size, with any “overhang” being cropped off (rather than there being empty space used to fit it). It’s primarily intended to be called from other tools but can be run from the command line.

Here’s the embedded help (which you can get by running it without input):

Here’s something that probably would be best if it were only remembered by the people involved. This is “Suckmord”, a movie that I did with some friends in highschool — below is the late Scott Fox, playing Codger the Morgue Attendant. You can click the thumbnail to watch it, or, since it really makes no sense and I would be shocked if any people actually got through it, here’s an explanation and story. This is captured off a very old VHS…