I'm getting resituated here in Mexico and setting up the new machine and gigabit network. When I'm done it'll mean that multiple people can work to maintain BME at the same time (we have some growth plans over the next year that will neccessitate that… job requirements: must love body modification, know BME fairly well, and be good with Photoshop; but don't apply yet please). I'm having some problems getting my “old” laptop (still the fastest machine in the house because it's so over-specced) to run at full speed, but other than that it's great.

Other than that my sister, sister-in-law, and two nephews are visiting. They've all gone to the beach so Phil and I can work on getting BME and BMEvideo caught up. Other than that, I've got to mop my floor because I poured Fresca all over it, and later today I'm going to go see if my car is finally roadworthy.

And back to La Paz…

OK, we don't leave until morning (very, very early morning), but I'm finishing up my packing and preparations, so while I'll be online, this is my official signout sheet from this trip. Big thanks to Barry and Jen (and Malarky too) for hosting us here in their little mountain paradise. 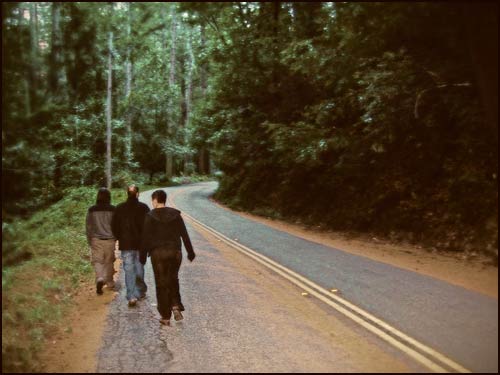 A lot of travelling to do over the next little while… In about a week I think I'm off to Las Vegas for a wedding, then I'm off to South Carolina (or maybe Illinois) for Christmas, then perhaps back to Santa Cruz for a few days… After that I may have a break if Rachel and Jen make it to Japan in January (and then perhaps we'll meet them in Hawaii on the way back) — although I may have to head up to Canada both for the election and to renew my passport — and then it's back to Africa in February. Then there's ModCon V in the spring, followed by BMEfest in the summer…

Ack! It sounds like more fun than it is… As much as it's wonderful to be able to shoot all over the world, sometimes it would be nice (at least from this introverted programmer's point of view) to know that for six months you don't have to go anywhere except your compiler!

Bad things in my Audi TT

I thought I'd told this “more of Shannon's bad behavior” story before but I couldn't find it anywhere. I apologize if it's a retelling. This takes place at my old house on Bathurst in Toronto while I'm driving my Audi TT. I'm trying to get back home, but the light ahead is red so even though my driveway is only a few hundred feet in front of me, I'm going to have to wait for the light to change to green, move ahead, change to red again (so the oncoming traffic will stop), and then pull in… Fuck that, I'm not wasting three minutes!

So I pull out into what would be oncoming traffic if anyone on the cross street turned, and floor it. I don't have much space to accelerate so I probably don't hit more than about 30 mph, but as I do so, I tear past a police car and then swerve into my driveway. As is expected the cop fires up his cherries and pulls in behind me blocking the driveway. I open the door and he walks up to me, clearly quite pissed off.

Yeah, well, I'm not about to make the number one dumb-criminal mistake of self-incrimination, so I just tell him, “Well, you see, I live in that house right over there, and this driveway connects at the rear, so I'm just parking in my driveway like I always do.”

“I JUST SAW YOU SPEED THROUGH FIVE HUNDRED FEET OF ONCOMING TRAFFIC!”

I've started the game now, so I decide to continue with my strategy of complete and categorical denial and simply say “no I didn't.” This really flusters him and he's getting visibly upset. I'm pretty sure that because of how I passed him I'm not on video, and by this point the light has changed and all potential witnesses have driven off. I'm quite sure I have the winning hand.

He sputters something about charging me with reckless driving, and I say, “Reckless driving? That's crazy — how do you expect me to park here? I mean, this is where I live! Are you telling me that I can't park here?”

“Are you saying you always drive through oncoming traffic?”

“Well how else am I supposed to get into my driveway?”

The cop is starting to realize that I'm basically saying “fuck you, take me to court if you think you've got anything,” and that he does not in fact have anything that will stand up against me in court. I guess that doesn't happen much to traffic police or something, because he was obviously shaken and not really sure how to proceed.

“Look, are you writing me a ticket for something or can I go?”

He then gives me some meaningless warning to save face and leaves.

I'll tell one other reckless driving story from the TT. I really must have felt invincible or something back then (although having been dead once before, you kind of lose the fear of death, so maybe it's just that)… Anyway, I'm on about a two hour drive with the TT back to Toronto, and I've got it maxxed out at 207 kph (that's where the limiter kicks in and I hadn't yet chipped my TT when this happened) for most of the way. Whenever I'd come up behind another car, I'd flash my high-beams at them from a half click back and tear past them as they pulled over.

I guess some people don't like pulling over when flashed so one guy not only didn't pull over, but he matched the speed of the person next to him (maybe 120 or 130) and blocked the highway… Yeah, well, Audi makes a good four wheel drive, right? So I just dropped back a little, gunned it, and pulled off the road and tore past him in the ditch.

I guess it made him really angry or offended his econocar-driving manhood, because as soon as I drove past the next on-ramp a police car was immediately on top of me. I pulled over and the young female officer came up to the car. She told me that the guy I'd passed called in a reckless driving complaint from his cellphone and that she'd just radar'd me speeding as well. Luckily I'd coincidentally slowed down and was probably only about 45 over the legal limit.

This was Christmas 1999 if I remember right, so the TT's had only been out for about a month. She told me this was the first time she'd ever seen one and wanted to check it out going on and on about how sexy it was and how she'd love to take it for a ride. A moment later she's leaning over me into the car and running her hands over the various features of the interior (the TT is a really nice piece of industrial design). I'm sure it's something women have to deal with in reverse all the time but it's kind of a strange experience when a cop is hot for your car and flirting with you.

Anyway, she let me go with either a warning or a greatly reduced ticket, I can't remember which.

I think maybe there was something in the water at that Bathurst apartment… while I was living there my neighbor got busted doing 300 kph (187 mph) in his supercharged Monte Carlo (a really obnoxious muscle car with a big blower sticking up out of the hood) on the DVP!

Christians I've tossed to the lions…

First there was Jane. I think she might have been a preacher's kid as well, but either way she was very devout and serious about being a good Christian girl (of the Charismatic sort; they were both into speaking in tongues). The art she made was very safe stuff. I don't remember it very clearly but in a haze I'm seeing unicorns and rainbows. What I do remember is taking a few bottles of paint and randomly pouring them all over one of her senior year projects, proclaiming, “there you go, now it's art!”

Oh, and I'd also splashed paint all over her formerly lily white smock to “help her look like an artist”. The irony is that not only was I not punished or even scolded in any way, but I received an A+, with my highschool art year was publicly dedicated to “the effect of drug use on creative expression”. Seriously, how the school put up with it I don't know.

I remember sitting in the cafeteria across the table from the other Christian girl I mentioned earlier. She was wearing a pale blue full-length conservative dress (her father was a minister who would later be defrocked in a prostitution scandal) and drinking a cranberry juice. For no reason at all, I picked up the bottle and poured the red liquid all over the dress she was wearing and she ran out crying.

Later at York University (from which I was almost expelled for attempted murder) my partner in crime and I met another sheltered Christian girl. She was a member of one of those cults that doesn't let its youth members go out and socialize with pagans and all that… One night she broke that rule and we climbed up onto the roof of one of the dorms and put a large dose of LSD into her eager open mouth. At first she enjoyed the experience, but after a few hours become despondent about her life and started talking about suicide. We climbed down off the roof to get a video camera so we could film her plunging to her death, but by the time we had everything set up, she was no longer in quite as self-destructive a mood. 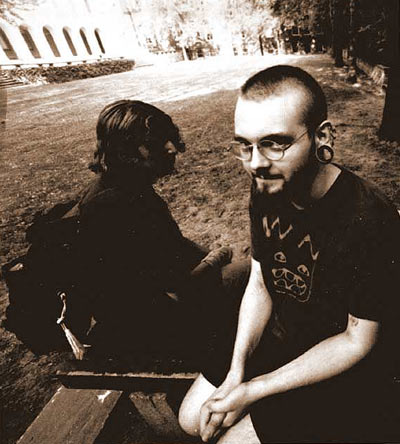 I did a lot of acid back then…
But don't think I'm a bad guy. I really thought I was doing the right thing in all of these cases, and still believe that. Does that make me a sociopath or an unwitting tool of Satan? What does Jay-Z say — “I've sold kilos of coke; I'm guessing I can sell CDs… I'm not a businessman: I'm a business, man”?

I sold LSD a decade ago for the same reason that I “sell BME” now. I never looked to make money as a drug dealer. I just wanted other people to try something that I genuinely believed in. The business was secondary to achieving the missionary goal: build a strong business around something you care about to help it grow. I'm not sure that I even could sell or promote something I didn't believe in personally.

Too bad for the mainstream that the stuff I believe in is kind of wacky!

Barry took us for a morning hike a day or two ago and this afternoon after coming back from record shopping and lunch (amusingly for Mexican food) we repeated the walk. It's not far, maybe a fifteen minute walk up a small mountain, but it gives you an amazing view of the bay. Here's some pictures of Saira, Michael, and Jon at the “summit” (well, close to it anyway).