Shannon's Law:   (and yes, of course I'm mostly joking!)
The more Z's are at the end of a studio's name, the lower the quality of the tatoozzz are going to be. 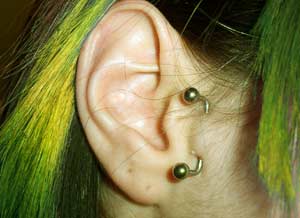 On that note, I thought piercers reading this might find this surface bar placement, well, amusing.

Oops! But here's a quickie.

My home internet connection has been down for the last 24 hours… I'm connecting from the hotel down the street temporarily — just here to download my mail so I can keep processing updates for when my connection comes back online.

[Still offline on Sunday, but will try and log in via dialup tonight to do a BME update]

We also went out to the BMEfest beach today and happened to bump into the owner who gave us some ballpark pricing on booking the entire space private, plus entertainment all day (innertubing, sea kayaks, everything), boats shuttling back and forth to a private island where you can go snorkling with sea lions (and pulling on the beach), unlimited food (everything from simple chips and salsa to lobster and shrimp) and unlimited drink, and so on. When I'm fully back online I'll post more details. 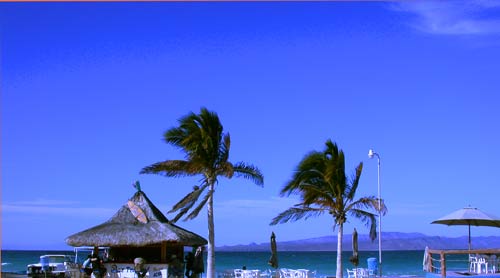 Other than that, greets out to that crazy self promoter “I'm Fakir approved but don't ask Fakir to verify that” piercer who still obsessively reads this page desperately looking for anything he can complain about. Remember the pathetic character that called in fake “I'm at BMEfest and there's underage drinking happening” complaints from thousands of miles away? The police just laughed at him, came and let me know about it, and added the fraud note to his file, invalidating his ability to make future whine-a-ramas.

I'm sure he's getting along great with all the little nazis who are currently mailing BME members and posting on RAB and so on about this “nigger-faggot loving site” (their words, not mine!)…

First, a question for any physicists reading this… How large a deep-ocean nuclear bomb would be needed to set off a tsunami similar in size and destructive power to the one that recently happened? Now, I assume that's impossible (nukes are too small?), so I'll let the question have a rider that maybe geologists or demolitions folks can fill me in on — how large an explosion would be required to cause a collapse of a subterranean island chain, in order to set off a supertsunami?

Ever seen A View To A Kill where a fault line is used as the weapon?


“Well my dear, I take it you spend quite a lot of time in the saddle.”

If one were Dr. Evil on a budget, would this be the most economical way to do immense damage to, say New York or Miami? Or would one be “better off” simply putting the explosive in a boat in the harbor? If you had, say two million dollars as a budget, what would do the absolute maximum amount of damage? CIAbots, please note that this is totally hypothetical and intended as a “let's write a James Bond movie” game, not as a “let's get ourselves tossed into Guantanamo” game!

Remember the warning about pictures on my page.
So Allen wins the prize for being our first friend to come and visit from afar (Saira is visiting next month, along with her überchef husband to see what new avenues we can explore, and Blair is hopefully coming in March). I hear he's stopped drinking. If he fails and becomes a stumbling and then passed-out drunkard, would the punishment pictured above be suitably Mexican?

As much as the propagandized US tries to hide it from its own people, the US Air Force is currently flying fighter missions over Iran, with the goal of goading them into turning on their air defenses — which, being active systems, could then be mapped and targeted — with a secondary goal of having Iran fire the opening shots in the upcoming war. These missions are being coupled with ground missions by special forces — expect this war to erupt soon, because even conservative estimates consider Iran's nuclear arsenal at most a few years away, and Israel, perhaps best positioned to give an accurate number, sets the limit at less than twelve months.     That said…

But here's the problem — the US has already cycled a full million suicide bombers troops through Iraq, and blown through $200 billion. Now, adjusted for inflation, Vietnam cost the US about a half trillion dollars (over eight years, versus the two years that Iraq has been going on) but that was a different time, when America was a much wealthier nation (and war profiteering was slightly less rampant). These days though it has neither the military might nor the manpower to invade a nation like Iran which has a military that dwarfs (claiming as many as 10 million soldiers or more) that of Iraq's shattered forces.


"The cost of attacking Iran is not something that the world can ever bear and a war against Iran will not remain within our borders," Mohammad Baqer Zolqadr, deputy head of Iran's Revolutionary Guards, was quoted as saying by the ISNA students news agency. "If America wants to invade Islamic Iran it must know that there is no limit to our defense and we have the capability to smash their heads, as with a mallet, wherever we wish."

Oh yeah, and if the upcoming Iraqi election brings about a Shiite majority, which statistically it should, the two nations become much more allied than they have been in hundreds of years… 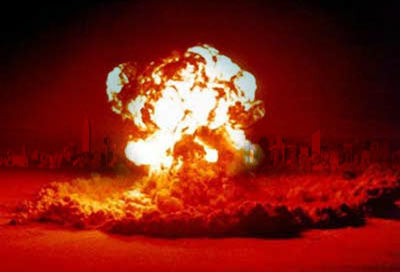 I hope with all my heart that I am chicken little.
Let me remind you as well that the already crumbled but still powerful terrorist and military empire of Russia has inked lucrative arms deals to make sure that Iran, Syria, and other “hostile” nations have more firepower than the US, to say nothing of potential systems purchased from North Korea. Already we know that Iran has Sunburn missiles, capable of destroying all but one ship in the US fleet, as well as possible ICBMs which can deliver nukes up to 6,000km away. Iran is a big target that will cause hundreds of thousands of Americans to die, if not more, will isolate the US from the rest of the world, and will bankrupt it as it can no longer afford its crumbling empire. It can't even succeed in Iraq, which is child's play in comparison to the larger and growing threats it is fanning the fires of. 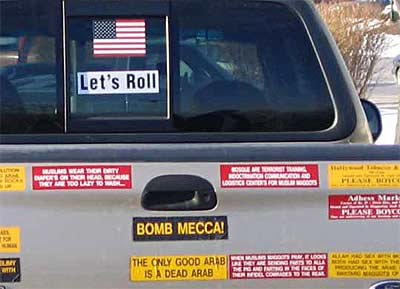 And for what? We Most of us know the WMD story was a lie. We now even know that the “Saddam's torture chambers” stories are unconfirmable at best, with the only sources turning out to be liars with agendas. The only torturing we can confirm was done by the West, and the only atrocity we can confirm — that of gassing the Kurds — was done with US approval using US supplied weapons.


The horrific experience of an Iraqi woman Jumana Hanna — supposedly imprisoned, raped, and tortured for years on the orders of Uday Hussein — was cited by the Bush administration and its supporters as "reason alone" for the war. But Hanna's story — like the rest of the administration's case — was a tissue of fabrications.

Every single justification that has been used by the US has turned out to be a lie. The only truth that remains is immense financial profit for those surrounding the administration (more, more, more). That, and crooked, self-serving Christian jihad. But more Americans die every day (more) and hospitals are overflowing with the mutilated bodies of American youths.

When I go to Walter Reed Hospital, where some of the 10,000 wounded from Iraq end up, I go ward to ward and bed to bed, and reach out to shake a hand, and someone puts a stump in it. These are the best kids we've ever had in the military and this is the best Army and Marine Corps I've seen in my 40 years of marching with them. And I tell you, this war is not worth one of their lives, let alone 1,400 of them.

If this continues you're going to see a Civil War in America. America isn't going to be destroyed from outside — New York City will be nuked by Dallas, not by Tehran. How long before America is gone as the nation we all wish it could be? The latest plan by the US is to start tagging visitors to the US with RFID chips (ie. passive radio tracking systems). Couple this with threats to execute anti-Bush journalists and you really have to wonder how long it's going to be before the US is a walled police state nation where no one enters, no one leaves, and no one speaks out against their wealthy owners.

You think robot warriors are going to solve this problem? I'm talking about killer robots, not the nice kind or even the sort that can bend it like Beckham. They'll definitely make the folks at SWORDS Corporation wealthy, on the backs of the beaten-down US tax-payers slaves. Maybe human-robot hybrids? How about animals with human brains? I repeat, this is a dangerous game, and it will not end well.

But maybe on a planetary level the death of the US is what's needed. The US is currently the world's largest polluter, and of large polluters, the only one that's unwilling to sign any treaties to reduce this pollution (unless you believe the oil company story). Even with the rest of the world cutting back on its pollution, with the US refusing to do so, it's almost pointless. Let me point out a terrible truth: We may be within ten years of the tipping point (more, more, more). That is, if we don't “fix” this problem inside a ten year window, we hit the point of no return and no matter what we do, we're looking at 99% of the life on the planet, if not more, becoming extinct — and that will include the vast majority of humans. Again: once we can see this train, it's too late to get off the tracks.

This is from Professor Peter Barrett, recently presented with the Marsden Medal and the director of the Antarctic Research Centre at Victoria University:

After forty years, I'm part of a huge community of scientists who have become alarmed with our discovery, that we know from our knowledge of the ancient past, that if we continue our present growth path, we are facing [human] extinction, not in millions of years, or even millennia, but by the end of this century.

At the end of the Permian period (about 250 million years ago), a sustained six degree increase in global temperatures killed 95% of the species of the time. Scientists are predicting an eleven degree increase by 2050. It shouldn't take a scientist to connect those dots.

If the US refuses to cut back on its pollution, the only way for the world to survive may be a doomsday scenario in which the US destroys itself or is destroyed by someone else in this misguided holy war. It will do incredible damage to the rest of the world, but perhaps it is the only way for humanity to survive the 21st century. It is a terrible sacrifice that will kill many wonderful but complicit people… Yeah, I know, “don't blame me, I just voted the way my TV told me to!” 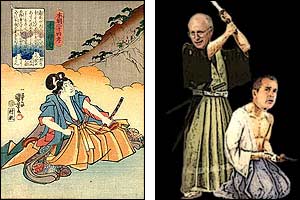 And if Bush really wants to end tyranny in this world I have one word for him: Seppuku.

But there is no honor among thieves, and this comment shall remain forever as empty satire.

Tomorrow morning you can expect a far darker entry ending with a reference to Japanese culture, so I thought this evening I should post something a little lighter… Can I just say that I love Japan? It's the only nation where you can contract a schoolgirl in a bathrobe to cut your penis in half. I feel like in a world where that's an option, anything is possible.