The update is of course uploaded. I also finally finished off some utilities for SPC that I'd been promising Shawn for a week now… Thankfully MiL0 was able to act as a go-between and write a manual for my rather “raw” way of expressing myself digitally. (It's a command-line based logo overlay tool, nothing that exciting).

My truck is screwing up… It's been stalling and when it restarts blowing out huge black clouds.

Oh, and thanks to aaron who has been helping me track down some of the more glaring security holes.

MajikMan just dropped me an IM to check out this article in the Times. It's about how youth with tattoos are far more likely to have sex and be involved in crime.

Big deal. Tattoos are socially deviant behavior. It doesn't matter how many accountants and school teachers get tattooed, there will always be more people who don't fit into society's mould getting them. Which means that among other things there will be more criminals getting them.

Give me some stats that really mean something. Tattooed criminals is old news.

Warning to Parents: If your teen expresses an interest in tattoos, they may be intelligent and creative.

When I got home, I found that my neighbor had blocked my driveway with his van, so I couldn't get in. So, I parked behind him, hopped out, and walked on in to find him cleaning my back yard, something he's been asking me to finish for weeks…

So I got stuck cleaning for forty minutes — and we're talking some gross stuff. I smell like pig manure, and I say that with the experience of having grown up on a farm. He wouldn't move his van until we were done!

This doesn't happen as much as it used to, but all the time still people assume that BME is the homepage of a tattoo or piercing studio and send me various requests for appointments and such.

I think the fact that it's simply signed "Thank". This next person seemed to know me quite specifically:

Anyway, I don't get these *that* much anymore thankfully. People have also stopped calling me "Sharon" which was starting to drive me crazy... If you flipped through the new pictures in my gallery, you'll have seen a picture of me from long ago taken by Lara Mushkat, probably in 1994 or so. Saira found this one and I nabbed it off of her page... It's frighteningly obvious that we were in the depths of our acid gobbling freaks period:

You've got to love my shirt though! My sister made it for me (who would have been around 11 at the time).

I was going through my old photos and thought it was time that I added some. Here is an old student card of mine… This was when I was 15! I couldn't even drive yet. 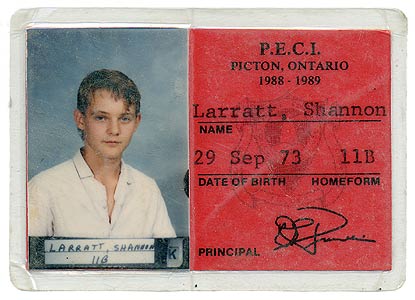 I've just posted the rest of the photos in my main gallery.