It's offline. I'm hitting this place over a phone line. Oh well, it at least means I'm getting lots of programming done (I'm working on the community based multi-lingual experience engine).

As you know, the US has dropped at least eight bombs on Red Cross buildings (which reminds me, good work bombing that hospital yesterday). The first time, they said it was just human error and apologized. The next time, they said it was the target the planes were told to hit, but that it had been a targetting error at HQ, and pointed out that the Taliban might be storing weapons in the Red Cross buildings. Yesterday, the defense department announced that they had actually intended to hit the Red Cross buildings because they had been commandeered by the Taliban (which is denied by the Red Cross). Now here's the punchline: Last night the story was on MSNBC at this link, but when I looked at it this morning, all mention of the story has been removed… What's up with that?

As Professor Sir Michael Howard, one of the world's more respected military histories pointed out yesterday, Al-Qaida and the Taliban are winning this war. He adds, on this war on terrorism, that there is “no policy more likely, not only to indefinitely prolong the war, but to ensure that we can never win it.”

Even though they got beat once by the Afghans, and the Taliban warned them, “Instead of dividing Afghanistan, Russia should make arrangements for paying salaries to its workers in its own country. Afghanistan is an independent country, and cannot accept puppet owners, and cannot accept slavery,” Russia is committing 250,000 troops, and the US is doing the same. Top that off with the 7.5 million Afghans that could starve to death this winter with the aid lines cut off by war, and you have one obvious result: a whole lot of death and misery on all sides… and that's the best-case scenario.

The US media has been just wonderful, right? Since the raids are failing and the bombing is useless, the CNN chief has ordered the reporters to “remind the viewers why the US is bombing“. You've got to love being lied to, right? At least the government will get more money (of course, that means the people get less). Whatever you do though, don't try and pretend there's freedom of the press, because unless you work for one of the highly controlled mainstream news agencies, or you live well outside of American reach (is there such a place?) you simply can not report on things freely.

And this, this is the most disgusting capitalizing on this yet. It really makes me sick. War, no matter which “side” you support, should never be used to trick children into giving you money.

Can you believe someone actually stole Danielle's pumpkin? Not only that, but later on they came along and stole the candles out of the other pumpkins! What kind of weirdo steals pumpkins? And I'm deeply insulted that they didn't steal mine! 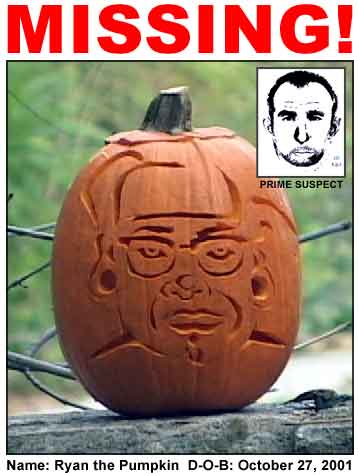 Pumpkins, all lit up

Ah, the treasure that exists behind my couch:

Well, I've got a little time to kill before meeting up with everyone for the concert… So I'll mention this story. Aparently the biggest terrorist attacks are planned for this week, but no one knows what they are or where they might happen (but they insist the warning is “credible”). I think this quote pretty much sums up the warning, “the attorney general asked citizens to be patient if they encounter additional security measures.”

The personal risk that US citizens may or may not be in at this time reminded me of something very interesting… I find it fascinating that in the US, it is legal to own all sorts of insane firearms (which I support by the way), but it's illegal to have advanced first aid supplies. Did you know that it's illegal to own sterile salt water when it's bagged for infusion? This is an ESSENTIAL supply for anyone who might need to play field medic in an emergency, but it's banned… First aid supplies illegal, guns legal… Interesting…

I'm not saying it's the wrong thing to do, but did you know that the money donated to the Red Cross's, only about $40 million has gone to immediate support of victim's families, leaving close to $500 million for other causes. It obviously doesn't make sense to pour $500+ million to the families, but still, people are going to feel very misled… More nefariously, First Equity's president has gone missing, along with $105 million. I wonder sometimes, what level would I be willing to sink to if I could run off with that kind of money.

Alert to those in Chicago: Don't even think about wearing a mask. Under Chicago law it is illegal to wear a mask (including a Muslim veil). You can't wear them on Halloween, but you can get special permission from the mayor to wear a mask if you're hosting a costume ball.

This is an interesting idea — that it's actually Ali that is responsible for the Islam = unamerican idea. This is worth reading as well — observations from a Pakistani student comparing how he saw America from both the inside and outside.

I felt I should point out again the falacies in the concept that the terrorists were “jealous” of American wealth, so that's why they attacked. Bin Laden has something like $500 million and the terrorists were rich kids as well. These were all people who could have lead easy lives if they'd wanted. PS. I thought my pumpkin was pretty cool, but this guy's ROCK