Have you ever wondered why…

Important stuff for people who might like to be in SAVED down below. Scroll down if you don't want to read my stuff, but just want the goods on being a moviestar and all.

I've got a pretty sweet deal in life, and have no right to complain about anything I suppose… But two really sad things happened to me this year — a lot of crappy stuff happened of course, but most of it doesn't bother me. But two things really make me sad. First, selling my Porsche because I thought I was moving out of the country and knew I couldn't take it with me still gets me really down whenever I think about it. 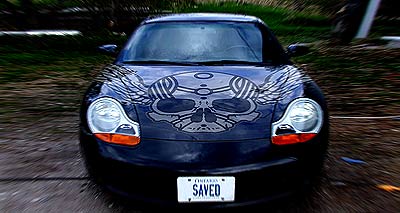 I know, it's dumb, but I really liked driving that car. Rachel's Touareg is nice and all, but it's really a downer to drive for me. I guess I've just been driving sports cars for so long that they've become part of my identity… I'm not a very good dresser so this doesn't apply to me, but I guess it would be kind of like if you took someone with a really stylish and distinctive look and forced them to wear nothing but sweatpants.

A friend of mine has got my old Carerra in his garage right now awaiting sale… There are some racing teams that have dibs on it, but part of me wants to take it back (but I need the money for more important things). I don't know if you read the story on Ryan's page about his unfortunate encounter this morning which involved him pulling a lifeless corpse out of a crashed car;


We managed to get [the car] up onto its side and smashed out the windshield to try and extract the man ... unfortunately there was no pulse and [judging] by the extent of the head trauma he wasn't alive for very long after flipping over.

For him, the moral of that story “tell your loved ones how you feel every chance you get” (a valid an honorable suggestion). For me it's a little different — I hope that the people I care about know how I feel — for me it's more of a live every day like it's your last sort of thing… Don't put off opportunities, and don't put off the things that make you happy for another day.

Anyway, it just makes me really sad whenever I see a nice car now.

Yeah, whine whine. The other thing that really broke my heart this year was having to give away my supercharged Corvette, which I'd built up from a $3000 junker, for the same reason as the Porsche (but also because I had nowhere to store it)… I just gave it to a friend's father, and I suppose I could ask for it back, but I don't like doing that sort of thing. But wow, I didn't think it would make me feel this deep a sense of loss.

I know the correct answer to all this is, “look you ingrate, you should just be happy you ever had those cars — most people aren't so lucky”, but the fact is that I worked really, really hard to get those cars and I really loved driving them and it was an important part of my life, at least to me.

Which brings me to the other car-lovers on IAM and BME.

There are a lot of you with neat cars (and motorcycles) here… Import racers and musclecars, a few exotics, big trucks, and other projects. If can shoot some footage of yourself and your toys, consider sending it in to me for the SAVED movie (the kookier the better). MiniDV footage is best for me, but I can use anything. Here's some old teaser clips to get you inspired (not that well encoded, sorry):

Those are Teckademics and DTM Power promo clips. I assume that I have “store and foreward” rights on them, but if you like these videos, I imagine you can mail order them via most import racing magazines and sites (or search for keywords like TECKADEMICS on the P2P networks — the Mischief DVDs are awesome if you love illegal street racing as much as I do).

If you want to send in video clips of this sort of thing (or any other unusual and interesting hobbies), you can send them to me at:

Please be sure to include your contact details, IAM page, and a statement of some sort that you permit me to use the footage. Let me know if you need a bribe as encouragement, be it BME gear, memberships, IAM time for you and friends, whatever…!

Since not everyone reads my page, if you have modified friends (on or off IAM) you think this might apply to, let them know. Thanks!

You know what I hate? Finding out that you forgot to turn your UPS systems back on after the big blackout earlier this year… I had a massive illustrated dictionary of Marquesan tattoo iconography open on my desktop that I just lost thanks to a blackout here. There are usually blackouts about once a week here, but they don't usually last more than about 1/4 second, which is short enough that the transformer in the powersupplies keeps the machines running. This one was a full second.

Starting from the top right, and rotating counter clockwise… The laser printer is available across all the machines (and most of the drives are shared as well). The first monitor is for my network hub which also acts as my media center, playing DVDs, MP3s, and feeding them through the stereo (under the printer). The next two monitors are from my old main machine which I now use for Photoshop work and general browsing.

After that are two more monitors (you can only see the back of the one LCD) on my portable solution that runs BME and I use for email and software development. The scanner is hooked up to the second machine, and underneath it is the first of three monitors (one TV monitor, two 21″) for the video editing box (ack — that's an eight monitor workspace right now).

Liam's article/interview is up on the main page now. If anyone has any feedback on it in general, please let me know — I'm trying to determine whether there's an interest in BME covering subjects like this or not (related anthropology, art, history, and so on). If there is I'll do more, but if not I'll focus on other areas.

Other than that I've been doing some interesting interview stuff this morning which required me to kick up a new QOD question list (ie. for people who want to do QOD). I'm happy with the current staff, but if you think you have what it takes, drop me a line and I can send you the question list as a “test”. I'd like to add a couple people to the 2004 roster, preferrably female.

Other than that, I've got a pair of 21″ monitors here (computer will follow at the start of the week) so the editing for the movie starts in earnest soon. First a teaser of a still from the film, and then the specs on the editing box for those that don't differentiate between hardware stats and erotica.

For those of you who are bodyart book collectors, the Japanese Edition of the ModCon Book just got added to BMEshop. We have 104 copies (out of a total run of about 1,500), and when they're gone, they're gone. So if you want one, you should probably grab it soon (it might just trickle out slowly, but you never know).

I'll briefly mention that we're also working to turn Liam's trip to Ethiopia (the article below) into a book as well, and there's also a book on the first years of Rites of Passage (the suspension group) in the works. There are a couple other projects by other authors, and then of course the voluntary torture book by me. So there's going to be a lot of exciting media coming from BME in 2004!