Mostly about whining on the internet

So my leg, while it still hurts of course, is pretty much back to normal mobility (as long as I don't use it for too long). About half the time I don't bother with the cane. Most importantly, I can straighten it (last night was literally the first time), which might not seem like much, but after a couple weeks of having it bent is very, very, very nice. I'm also noticing that the dominant pain is back to being the knee, rather than my entire leg (that's a good thing I figure).

That said, I still don't have feeling back (except in the areas where I do, where it's acutely sensitive) in that one quadrant of the leg. I spent a few minutes poking myself with a sharp object to mark out the outline of where I can feel and where I can't… In the picture below, anything that's red is “invisible” to me.

It's kind of interesting on one hand, because you get to see how far your brain is willing to go on filling in the gaps (if I touch it with my finger, it feels “wrong” but it has the illusion of sensation, but if I touch it with an object I can't sense it) but on the other hand, it's also a little off-putting because that's a lot of extra creativity being poured into the engines of reality in order to keep the world whole.

I really like driving the truck in the winter. I like watching people in their expensive SUVs sliding all over the place while this beater truck goes through just about anything… I want something fun to get stuck near me so I can winch it out. By the way, now that there's actually snow in this area, I should really crack out my old snowmobile. It was recently fixed (a favor trade), so maybe it's time to have some bone breaking fun on it. I wonder how long I could run it on the ice around Toronto before getting busted. 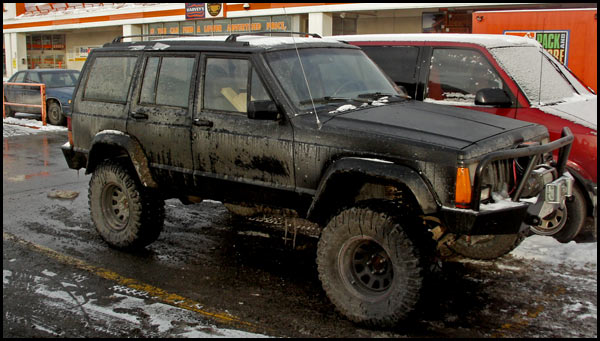 Well, as much as I'm feeling a lot better, I'm still pretty tired (one nice thing about being in intense pain and healing is that I actually slept really well — now I'm back to a few hours as I improve). So I'm heading out to pick up Nefarious from school, get some groceries (fruit and juice mostly), have some supper, try and see if I can squeeze in an experience update for BME, and then I have my doctor's appointment, presumably to find out about my main surgery, tomorrow morning.

I got a call from some other doctor insisting that I had an appointment for my kidneys tomorrow as well. I'm almost certain that I told the doctor I really didn't want to go to any more doctor's appointments unless it was important, and they wouldn't tell me (or the people I was talking to didn't know) why the appointment was even made in the first place. One of the things that sucks about having a non-existent memory is that I really have no idea if the doctor considered my case an emergency and I need to go deal with this now, or if the doctor was just trying to scam someone some OHIP (health insurance) money.

So I've discovered that there are lots of engineers and designers in former Soviet countries with interesting experience and abilities that are able to work for far less than happens here… I'm talking to the guy that built the stuff below (and lots more) about doing some preliminary work on the Snowrail prototype (a sportscar for offroad soft snow conditions). It will be interesting to see how this turns out.

I decided to repaint my latest project painting (complete other than the frame, which I'll probably build tomorrow morning with two by fours) using exclusively iridescent pearl mixed with the colors (so basically it's all sparkley or metallic looking), as well as automotive spot color for the blackwork. It pretty much means that I can't get a good photo of it. 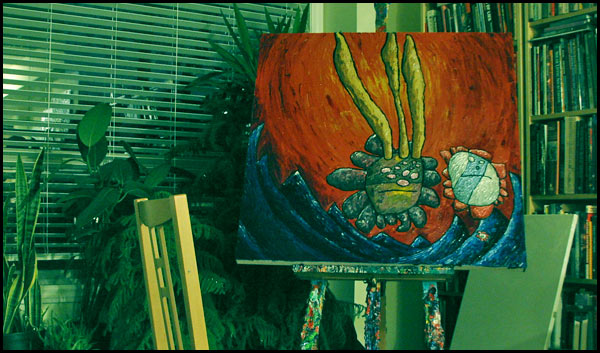 As always, drawing and concept by Nefarious (age 3), painting by me (age 33).

Mostly the stuff this morning for BMEfest went fairly well, although I'm not sure whether we'll be eligible for all of the permits I want or not because we're just regular people, not a corporation looking for a tax write-off. We'll see. The good news is that we have tons of time left and the spaces are barely spoken for… and I have plan B's in place as well.

Anyway, the event page is up as is the official forum. If you are pretty much 100% sure you're coming, please sign up, because the if we have to go to a plan B (like having BMEfest on a riverboat or something fun) I have to have a solid guess as to the attendance. 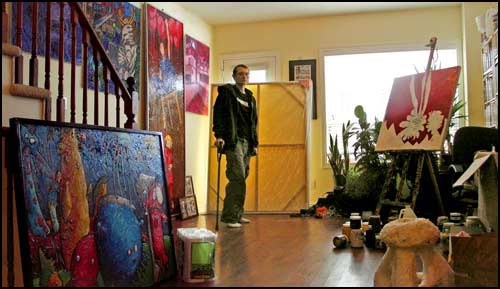 On the way home I picked up some iridescent pearl paint. I'm not sure what I'm going to paint with it yet but I liked the way it looked. That's me in the “studio” slash dining room (click to zoom in if you want). I haven't decided yet what's going on the two big canvasses leaning up against the door behind me.

Off to City Hall?

…to get a few BMEfest permits I hope. I just spoke to them and all the locations I like are still available. Anyway, I decided to try and look as “presentable” as possible, so that's a before and after.

I've been eating a lot still, and by and large have been far less active the last two weeks, but I'm down to 165lb, which I think is probably the lightest I've been since I was maybe thirteen or fourteen years old (I'm 6'2″ to put it into context). I've got to start getting into the habit of downing MRP shakes again… Even with a 3,000+ calorie diet and not going to the gym my weight is dropping. 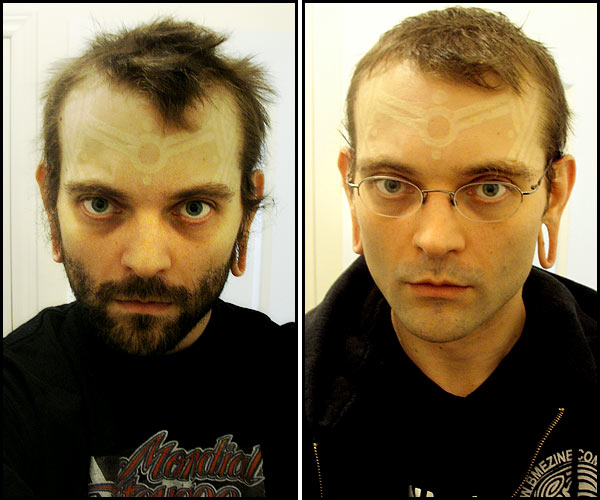 Anyway, if there's good news on the permits I'll post that later in the day.