This is a 4 meg WMV (Windows Media) video file of clouds rolling past behind Nicole's suspension on a mountain on Tortola, BVI. It's speed up to 10,000% speed (so that 16 second clip is actually almost half an hour of real time). Right-click and save this if you want to watch: 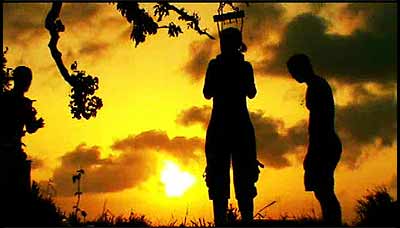 Note: because it's encoded at a high bitrate, you might have to start it in WMP, press stop, and then play again (otherwise you might get 4 seconds of black at the start of the clip). Dunno why, ask Mr. Bill for the answer.

I got my editing machine plugged back together today, and wow, is it ever fast. It's the same computer, but with a properly segmented PCI bus so it can throw data around very fast. Definitely the best realtime editing solution I've worked with… unless of course you inlude the four months of dowtime for repairs! Heh… But it's good to have it back on my desk and running.

Anyway, the reason my fingers are crossed is because I just sent off my first two letters asking artists (that I don't know personally) to allow their music to be used in the film. I hope they go for it, because it's really amazing music. One of the tracks is a folk guitar piece that I want to use with the footage shot in Mexico, and the other one is experimental jazz flute with really mind-blowing Aramaic singing that I'd like to use with the footage we shot in Vietnam and Cambodia.

Got my bloodwork back today (needed it for surgery)… not that it's any surprise, but I'm clear on all my Hep and HIV tests. HIV I wasn't worried about because I'm not really in a risk category, but, being heavily tattooed I've got an elevated Hepatitis risk of course.

Of course I know the contamination control practices of the studio I use, but mistakes happen to doctors and mistakes happen to tattoo artists. Even with protection, if you're getting tattooed and pierced, you are putting yourself in harm's way and putting a lot of faith in the hands of people getting paid a very small amount of money for protecting you… Luckily the vast majority care deeply about what they're doing. So to all you tattoo artists and piercers who helped keep me safe, thank you!

What is that, some kind of Kabbalah?

This is from fifteen minutes ago:


Woman One: "My friend Frank converted to Buddhism. I think he did it just so he has something bad to say about Jews."

Woman One: "Yeah, so it's OK. Jews are so cool. Judaism is so trendy right now! Frank grew up around Buddhists though, so he's really connected. He really is an angry guy though."

Woman Two: "I know what you mean — all my Buddhist friends have lists of things that are bad. This persons bad, that person's bad..."

It literally went on like this for our entire meal. I think it may have been funny, but I can't tell if it was funny ha-ha, or funny schadenfreude. When you combine wealth and stupidity the results aren't usually that good, but at least they have a Three Stooges-esque element…

As you can see, as of April 5th, I've got a parking contract for my Vette. Last night as I walked past it, I saw this rather threatening ticket under the windshield. I'm pretty sure that building management is beginning to think I'm a lawsuit waiting to happen, because I fired them off a note explaining that it was a heavily customized car and that it could be very costly if it was damaged being illegally towed.

They called back this morning and told me that when they assigned the spot, they'd accidentally given me one that was already in use. The punch line is I get to keep the spot and the other guy has to move. I'm not sure that's fair either, but it's kind of funny (since he's probably who complained in the first place).