I'm writing this from a hotel in downtown Windhoek, Namibia. The flight, a short hour and a half or so on an almost deserted jet, took a path across Botswana and over the Kalahari desert. The weather was getting stormy, and it was some of the worst turbulence I've ever experienced on a full-size jet — I think the only time I've been tossed around like that is coming in for a landing at Toronto's City Centre airport in the small Cessna I flew during my pilot's training. However, the view was gorgeous.

The drive from the airport into the city is about forty minutes. The land is disconcertingly similar to the part of Mexico we live in, although it's a little more green (even though this is a desert, it rains more here, and gets much colder in the winter). Similarly, it's not quite wet enough, nor does it have the quality of soil, to be suitable farmland, so Namibia is a major beef producing nation, as well as raising goats, sheep, pig, and of course game animals — we saw wild kudu grazing along the side of the road as we drove by. I didn't snap a picture but I'll try and do so tomorrow.

Windhoek itself is picturesque in parts (and very “small town Europe”), although just a little bit too much Detroit and New Jersey architecture and vibe has been thrown into the mix to make it universally postcard-pretty. The fact that there appears to be no faux pas in openly pissing on the sidewalk doesn't really help either… if you tried to pull that in La Paz, four dudes would jump out of a lowrider, kick the crap out of you, and hold you until the police came and arrested you. But it is very pretty if you point your camera in the right direction.

Rachel and I really stand out here with our tattoos and stretched lobes. In South Africa, I was asked numerous times — I think at least partially seriously — whether I had grown up Zulu. Here in Namibia people seem a little more rude (some of the vibe reminds me of the Caribbean), not going to very much effort to hide their amazement and — yes, even though it's Afrikaans I can still tell what you're saying — ridicule. But the reactions also seem to include a real sense of “I've never seen that before”. While I see pierced and tattooed people all the time in Mexico, I haven't really seen anyone here (and like I said, Mexico really is politeness obsessed, so negative reactions there have been very minimal).

The connection here is not very fast but I may post a small update later tonight still.

One of the nice things about being out of Mexico, which tends to have a fairly limited cuisine, is having many more vegan options. Mexico doesn't yet really have an awareness of that diet, so it can be very hard to explain even in Spanish (distressingly, asking for “no meat” often is interpreted as “please take out the biggest pieces of meat”), but here a vast number of items are labeled as vegan, and those that aren't explicitly labeled are pretty good about explaining what the components are (i.e. is it cooked with oil or butter?). In Heathrow I had a sandwich that I'm sure is old news to many reading this, but I thought would amuse some… It's an open source sandwich.

Anyway, given that my own software crashes or misbehaves plenty, I am always amused when I see errors in professional installations… Here's a Microsoft Windows “there are unused icons on your desktop” error on the boarding display at the Johannesburg airport:

Oops! To illustrate that yesterday was no fluke, here's a few sunrise shots from this morning, taken about half an hour apart starting at I think 6 AM. Even from just this half kilometer I've covered so far, it really is beautiful here (and people seem very amused at our appearance, but not in a hostile way, except for the rich old Dutch folks who display obvious and extreme scorn).

If you're wondering why we aren't farther away yet, it's because we leave for Namibia in a few hours. We'll be there for a little while, then I think we're off to Capetown, then back up to Pretoria, and then maybe a stopover in Mauritius or Madagascar as well, but it's still to be decided. In the short term, Windhoek…

I've decided that in the future, the right way to travel is to rent an apartment for a month and just live somewhere for a while… I wish there was a directory of vacation rentals that have high-speed internet. It's hard to even find hotels that have reliable service… This hotel's connection is relatively fast (about the same as my connection back in La Paz), but it's outrageously expensive (about $15 per hour) and isn't reliable enough to maintain a connection for long enough to maintain an extended connection. Assuming the hotel in Windhoek is a little better I'll be uploading an image update from there.

Here we are on the mushroom dotted plains of Africa — finally made it. However, on the way here was yet another encounter conveniently arranged by the good folks at ECCO. As we were passing through security at Heathrow, there in front of us were Lukas Zpira, Satomi, and Melise, returing from Tokyo (we're scheduled to meet again in Mexico). Lukas looks as stylish as always after a day of flying, but me on the other hand, I look even less stylish than usual! 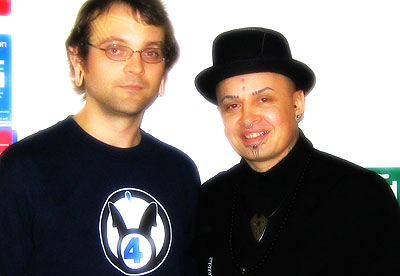 The flight to South Africa wasn't too bad; another overnight and another few movies watched. We landed at sunset. The clouds here are just right, like clouds are in dreams.

We're going to take a nap I think and then sort out our plans.

We're stopped over right now for about three hours in London… Rachel's skill has gotten us into the Admiral's Club which definitely makes the stopover much more pleasant. About eleven more hours in the air and we're in Johannesburg, South Africa, and then the adventure begins. 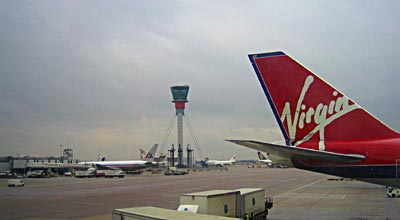 I'm not sure if I'm allowed to take pictures in here, but I figure since last time I was here we shot video of the signs that say “no cameras allowed” it's probably not a big deal… Anyway, you know you're tired when you're getting tipsy off unbelievably weak 3.5% British beer!

BME tattoos and the upcoming invasion

I like lancer1969's new tattoo — it's a mix of a BME logo and a Detroit Red Wings logo! I always like it when people take the logos and modify them to suit their own personality (not that I don't also like the ones that are done as-is — especially as neck pieces). 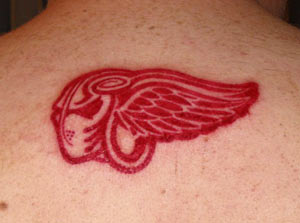 Anyway, I'm totally dreading this upcoming twenty hour flight, so let me share the dread a little. There is increasing chatter that a specific plan has been drawn up to invade Iran in June, although about that idea Bush says, “this notion that the United States is getting ready to attack Iran is simply ridiculous — and having said that, all options are on the table.“

The US has also recently hassled Russia over “democracy”, and told Canada that it has no sovereignty over its own airspace. What's strange to me about all these actions is that they are fundamentally self-destructive. They are very hard on the economy, international relations, the US's military power, and most of all the average person. They don't make sense. Again, I point out that this is one of two things. Either the US is playing out a doomsday scenario, or it's a land grab.

The US is the richest country in the world. Thus, if you want to become the richest person in the world, the best target in the world is America. If you want to do it legally, America is also a great choice because it's a credit culture, and it's very easy to manipulate a credit culture to move money upward (which I've written on in the past). When you destabilize the US economy, you don't end up with less money in the system — you simply move it upward into fewer hands.

This is what war always has been.

The war on terror and the violence that surrounds it around the world is nothing but a way of moving money from the lower and middle — and even upper — classes into the hands of a tiny percentage of people, and the mechanisms that move that money are perfectly legal and consentual. The magic question is whether their greed is so overwhelming that it pushes us down a course that destroys us, either on its own, or because we miss the obvious.

PS. If this story is true, it's proof that the art world is full of idiots.