My big thing in life is consent. I've been involved in a number of projects that push human behavior even farther than BME does (like EroticDeath.com, a contact site for “murders seeking victims” and vice-versa, currently offline), but for all of them the thing that unifies them is consent. I feel very strongly that if someone can give clear and informed consent for an act that doesn't harm anyone else — even if it harms them — they should be permitted to do so… and if consent can not be given for an action, it needs to be very carefully considered. That's part of the reason I get so angry when people try to censor BME (and a part of why I'm vegan, which may give me neurological blessings). 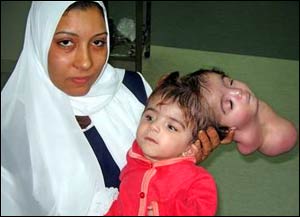 Speaking of not giving consent in the most extreme of cases — death — is this story via Boing Boing on a parasitic twin murder (you may not agree with my choice of word) that's a just little disturbing. That's not just a “birth defect” as they call it in the MSNBC article — the second head smiled, responded, blinked, and as I understand it appeared to be sentient. This raises an interesting question — if it will improve your life, can you murder your [handicapped] siblings without their consent?

Obviously the question is a lot more complicated than just that, but that is a part of it. Well, if that's already starting to give you nightmares, try and focus on the picture below. The goal of the game is, as it often is on my page, to try and figure out exactly what you're looking at. The answer will be in one of the next BME/HARD updates.

Other than that, the guys that did the expose on Jeff Gannon want to talk to me. Luckily I blabber about my past so openly that I don't think there's anything I have to worry about.

A meal fit for a pelican

I've been paring down a combined pile of messages totalling over eighty pages of stories from piercers for a new article that I hope to post either later tonight or in the morning. However, I did take a break to go to the beach. Among other things I took a picture of a pelican having his lunch.

A story about beer

A few days ago I mentioned being on a bus with a Mormon missionary. The story I forgot to include was of his conversation with the guy from Guadalajara. The local guy had brough along a bunch of Modelo-brand beer and had generously offered to share it with others, which turned into a chat about beer around the world. After talking about different brands of Mexican beer for a while, the American guy said to him — with complete sincerity and a straight face — “Yeah, we have pretty good beer in the States as well… some of the best kinds are Miller Lite and Coors Lite.” 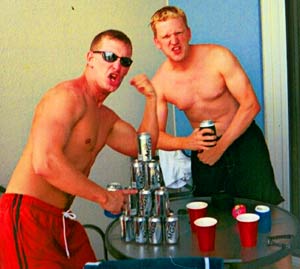 The Effects of American Beer
The guy on the left in the picture above looks suspiciously like my Mormon co-passenger. I suppose realizing that a number of people were looking at him incredulously and that the conversation had abruptly ended, he clarified his statement — “but we'll drink anything if it'll get us drunk.”

Maybe I've drank a little bit too much Québécois Apocalypse Beer, but I don't think I could get drunk off anything ending with a four letter synonym for “light”, no matter how much I drank.

In any case, real Americans do cocaine.

DISCLAIMER: This is a humorous entry. There are tons of good microbrews in America. Just avoid anything ending in “LITE”.
Comments (0)

Thanks Joao (fotolog) for sending this photo of DSW's hand (more) by Jony Anderson. 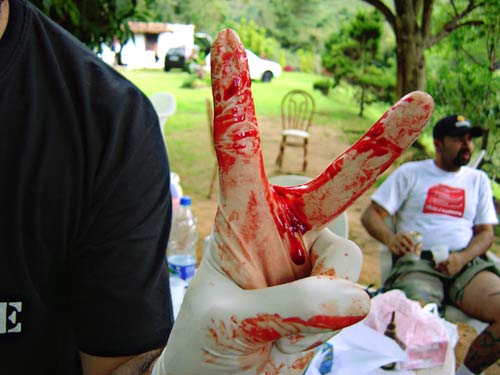 At present UnderMars is pushing out 26mb/s of data and climbing fast. To put that into context, that's approaching three hundred gig a day or nine terabytes a month of transfer. Expensive! I've cut the resolution and quality of the images slightly so they're about a third the size, which I hope will halve my bandwidth. If anyone has 100+ mb/s of bandwidth they are able to donate for this (about $5k a month), please contact me. I will keep the site online as long as possible but if the bandwidth continues to climb I will not be able to afford to. 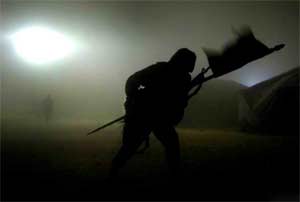 Warning: Site is extremely graphic.
It's rather disturbing reading what people have to say about me and the site. It's interesting that I've rarely gotten flack about posting pictures like this if they're accompanied by an over-the-top paranoid antiwar rant (nor does antiwar.com, which posts such images centrally on a daily basis), but if I post them sans-politics, to show them as is without politicizing, suddenly I'm a bad guy… People need to see these scenes as they are seen at the time, not as tools of one set of pundits or another.

One of the biggest problems with war is that it's hidden behind a thick political and media filter where each “side” twists it to broadcast their own message. However, war is not fought by the media or the politicians or even the corporate CEOs that profit from it — war is fought by the commoner, and it is the commoner that suffers through war. It is the common man's story that must be told if the uninitiated populace is ever to see war for what it is.

The Aztecs believed that when the sun dies, as it eventually must, the world falls into chaos and is destroyed and reborn, with this cycle repeating five times. We currently living under the fifth and final sun Naollin — Tonatiub — the Sun God. During this era the inhabitants of the Earth are to be tested under increasing hardships, with each returning to the sun as they inevitably perish.

Eventually this sun will die as well, and the planet we live on will be destroyed by an immense earthquake that will tear the world apart forever. Some versions of the mythos allow us redemption, but only if we cast away the sins that are destroying the world. I wonder if we would take the opportunity?