So we're back in Toronto right now in the palace of stink. The plan for today/tomorrow is to clear out EVERYTHING (mostly garbage) from this apartment, call 1-800-GOT-JUNK, and then spray this place down with a firehose so it doesn't smell like the mythical lost city of the mouse people.

Leeta and I did the drive back (she's really nice car company), and Rachel dealt with the surveyer's and such and then flew — the timing was perfect as I basically arrived, rested for a moment, and then met her at the airport. The drive is actually not to hard — it's about 1400 km, so it took me ten hours (don't ask me how I managed to average 140 the whole way).

Had a couple incidents — first, getting gas on the east coast in the TT isn't great, because only about a third of the gas stations have high octane (just 91, nothing unusual) gas… Oh, they all have the pumps, but since no one buys the “super” gas, they sit empty… (“We haven't had that spirit here since 1969.”)

Anyway, as I'm entering Grand Falls (western New Brunswick, on the border to Quebec), I shred and blow off my rear right tire (it was a long time coming, it had crack in the inner sidewall from day one, it's my own fault for not returning it). Luckily I'm practically in front of a tire shop when this happens. So, I walk in and point at my car, and say, “I just blew the rear tire off my TT, do you have anything that will fit it?”

Not only had they never heard of a TT, but they'd never seen an Audi before (“What kind of car is that? Audi you say? I don't think we have those up around here!”). The TT (“How do you spell that? Thomas-thomas you say? Huh!”) has 17″ wheels — not a single tire place in town (there were at least five) had low profile tires, so we had to see what we could rig up. No one had even 16″ wheels and tires, so we had to jerry-rig something.

We ended up squeezing on a 15″ rim and tire, but it rubbed on the brake caliper. So then we put a whole bunch of washers in between the wheel and the hub to push the rim out so it wasn't rubbing. It seemed solid. The tire was rated at 170 (the slowest rated tire I've owned in a long time!), so that determined my top speed on the rest of the drive.

I will definitely be sending a thank you note to the head offices of that tire shop — everyone there was incredibly nice and really saved my day. Driving back on an 80kph-rated spare would have driven me insaner.

Anyway, ten hours. I'm quite proud of that!

And in the interests of national unity, I won't even get into what I think of driving in Montreal. Suffice it to say that I've driven across America three times, once to Canada's west coast, and I think five or six times to the East coast, and Montreal is literally the only city I've ever been in that I got lost out of my mind every time I pass through.

Oh, I know what else I have to do — make a slick shirt for the July 1st Toronto BBQ. And this time there's enough notice to do jackets! If you want one (a jacket; they'll be about $40 CDN probably), maybe sign the petition below with the size you'd like so I have a rough idea. If you've already signed, just unsign and resign.

Priscilla is in my head

"It's funny. We all sit around mindlessly slagging off that vile stink-hole of a city. But in it's strange way it looks after us. I don't know if that ugly wall of suburbia has been put up to stop them getting in or us getting out."

I'm more of a yippie…

As a going away present, our mutual friend Meg gave Rachel and I a copy of the classic Living on the Earth. I'm actually surprised that I hadn't seen this book before — it would have fit in perfectly in my parents library alongside books like Shelter (highly recommended by me).

Anyway, I read it today in the bath (thank you Meg!). Now I'm all excited about making my own soaps and sewing my own clothes — as if I don't have too many “want to do” things on my list already. Some of the book was a bit too lifestyle hippie for me, but it was really fun and inspiring. Of course, with the following opening drawing (the whole book is hand written), how can you really go wrong? 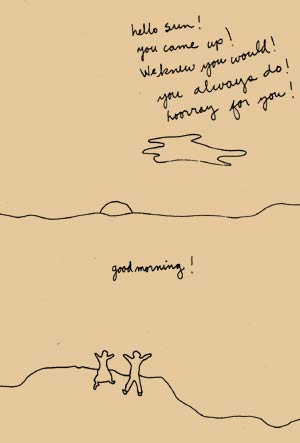 So my sister asked in her forum, “what would you do if you had one day to live” (OK, it was asked a few days ago, but I'm slow). My answer:


"If I had one day to live, I'd do exactly what I do every day. As far as I'm concerned, if at the end of the day, you can't say, 'I had a good day; that was a day worth living,' you're doing something wrong. That said, if I was able to alter the course of my final day, on a purely selfish level, the more of my friends and family I could spend it with, the better."

Also, I was asked in the forum (well, I'm not sure if I was asked or attacked, but I'll pretend it was a real question) why I use MPEG for videos, considering that there are many newer formats that are both smaller and higher quality. The reason that I stick with MPEG is that MPEG files can be played on pretty much every single machine that can access IAM — it's effectively a universal format. The newer formats will play on less and less machines, effectively making me classist — remember, there are many IAM members around the world that are using machines and operating systems that are a decade “out of date”. Not everyone has a P4 on a cablemodem!

That said, if anyone wants to download the videos like the BBQ video posted below, and re-encode it in a format they think makes more sense, do feel free to. If you do, toss it up on a server for people to download and post the link in the Whatever forum I guess… (Yes, I know I always reply the same way to complaints: “Don't like the way I did it? GREAT! I trust you'll do it better then?”)

More on the view

The five photos below were all taken on what is essentially our front lawn. This isn't on our property, it's off the decent sized two-bedroom apartment we've rented to stay in during the building period for the grand sum of a bit under $200 US a month. So… again… If you're in the IT industry, or are a writer, or in any of the other fields that are geography independant, why isn't this what your front yard looks like?

This sort of thing *really* makes me feel just a little like the Group of Seven must have felt… As Lawren S. Harris said, “We had commenced our great adventure. We lived in a continuous blaze of enthusiasm. We were at times very serious and concerned, at other times hilarious and carefree. Above all, we loved this country and loved exploring and painting it.”