OK, I've got links back up and running, but since it's from a backup, I've lost all the recent links. Please don't request that they be added yet, because assuming the drive can be restored (which is getting less likely, it's really screwed), I'll be able to replace the most recent data files…

BMEshop will go back up over the next couple of days as Ryan re-enters the inventory, and the experience engine will be up by the end of the weekend. Risks will be up later this week coming up (it suffered the most loss).

I know I've only put in about ten hours of work so far today, and I feel like a bit of a slacker turning in so early, but I'm taking a break early tonight… I've got about an hour of file conversions to do (have to move a bunch of stuff for the book from PC to Mac using various convoluted techniques)…

It's pretty rare to actually get “new” photos… That is, photos of largely undocumented techniques. Today I got a slew of photos of permanent piercings done using a “chain method” (they'll be added this evening to BME). 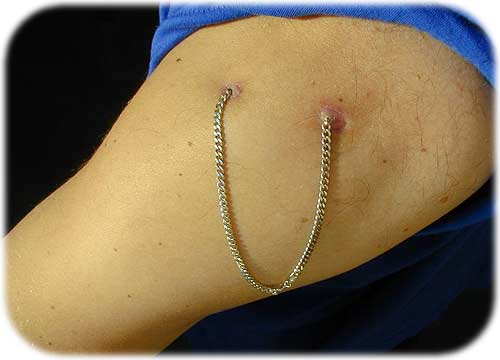 The underlying concept is that by using chain, rather than a solid bar, that the tissue grows through the links of the chain, effectively integrating it into your body. The shoulder piercing above (there are lots more that are getting posted to the site) takes is a big step farther by being intramuscular — this piercing passes more than an inch down into the shoulder!

Now, I'm not recommending this procedure, it's obviously fraught with risks and should only be attempted by those with mutant healing factor… But boy is it neat to see it in practise successfully!

So, I'm doing an image update, but as with every update, half the battle is weeding out all the sXe/emo kids who draw pictures of stars on themselves and then send them to me as tattoos, and then all the people who send stolen pictures (usually just pictures from the last update with the logo airbrushed off)… Anyway, here is my standard response now, send from my “Franko Derb” alias:


To: CheRryKiSsEs2772
From: Franko Derb
Subject: Re: (no subject)

Great picture, now your full membership will be on its way as soon as you answer this skill testing question (sorry, it's required by law to make sure you are mature enough for the content of the site):


"Monday and Tuesday have two, Wednesday and Thursday have one, Friday has six and Saturday and Sunday have none, what is it?"

I have set your username to "guest3942". Your password is the answer to this riddle. Enjoy the site,


I figure if they want to try and fuck me over and waste my time, I'll waste a little of their time in reverse. Honestly, I'd say that 80% of my time on BME is spent dealing with problem users — people trying to hack passwords, people sending in fake submissions, people who cause problems on IAM, etc. etc. etc…
Comments (0)

No rest for the weary…

Well, today is the last day that the book is getting checked… Then tonight I give it a last go over and then in the morning it goes to press. Of course, all that means is that I have to do a big (or as big as possible) image update today, and then hopefully restore the drives on the server tomorrow. So I don't think I'll be saying goodbye to 120 hour work weeks any time soon.

I imagine most of you know that the various US forces are using urban and rural domestic environments for training exercises… Here's what happened in Raleigh, NC: A young cop notices a suspicious vehicle and pulls it over. The trainees in the car assume the cop is part of the training exercise and attempt to disarm him. Then they all start shooting each other with real bullets. I'm not saying that they should stop these exercises (although it sounds like they need to be a bit more thorough on informing local law enforcement), but it just really sucks when young soldiers — and young cops — are killed meaninglessly…

Maybe it's just me, but I really find all this limiting of access to information worrying. Right now it's “voluntary” limitations helped out by libraries, schools, etc… But the basic problem is that companies like Paladin Press publish analogous information as their primary business. So shutting down a library doesn't shut down a publisher… So worry about what the next step is…

Now I do want to mention one that I thought was sort of scary. After the 9/11 attacks, there were of course people who pointed out the obvious “maybe America got what's coming to it” — Now, independant of it's truth, that statement is overly simplistic and in very poor taste given the timing, and as a result gets angry reactions (don't I know it). But… Should you go to jail for it? William Harvey did. He's been nailed for disorderly conduct — apparently speech is judged in America not by it's CONTENT, but by the public's REACTION. Scary stuff… So does that mean that if the general public is upset by the ModCon book, I have yet another reason I can't enter the land of the free without it becoming my prison?

Finally, two quick links on the various “disappearing acts” after 9/11 in The Times and in the Indepedent.

This is my final day of editing the ModCon book. After this, it goes to other people for final review, and then to the presses. People have been asking me a few questions, so I'll try and quickly answer a few of them here.

Can I reserve or pre-order a copy?
Not at present, although BMEshop may add that option when the server is fixed in a day or two, so people ordering with a money order won't have to wait. Also, we're printing either 2500 or 5000 copies, so there won't be any stocking problems.

What does the book cost?
The price hasn't been set yet, but it'll be between $19.99 and $29.99. Definitely not lower, and definitely not higher.

Does it come with a CD or DVD?
No, but we have been and will continue to post the various videos online. 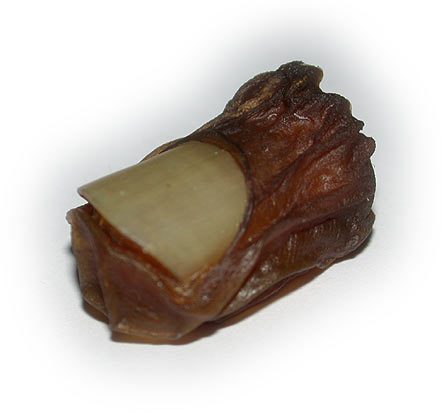