Don't try this at home!

This is one of the craziest feeling things to happen to me, hands down, ever. Don't try this (and don't be as stupid as me — if you're going to do it, do it with someone else around, and don't do it somewhere you could drown). Personally, I have no intention of trying it again.

Anyway, I'm lying in the tub trying to relax. My pulse is very visible (at all times) — you can see it in the veins on my wrist because they move around with every heartbeat. Same goes for most of my torso, and especially the blood vessels that run from the groin down the thigh, which move as much as half an inch with every contraction. So I'm lying in the tub watching my heartbeat in my legs, and speeding it up and then slowing it way down to relax, a simple exercise I do for stress control. I wondered if I could actually stop my heart, so I concentrated on not slowing it down, but just focussed on it really intensely, made it everything I thought about and put myself consciously into each beat, feeling it happen. When I was ready, I tried to freeze that moment in time, just lock myself in that moment. I just stopped all thought and tried to just make it end.

And then my heart stopped beating. I watched it and felt it for a moment, realizing that it had actually happened and not knowing what to do. I don't think I panicked but I remember feeling very, very strange. I don't really know how to describe the sensation, and what followed was I assume hallucination. My entire field of vision was reduced to nothing but blues and purples — no other colors — and I felt myself “shrinking”. My limbs deepened quickly in tone, and I started to slump into the tub. I couldn't stop it at this point — this is the only time in my life I've ever passed out that I can recall — and just sort of “watched” myself from what felt like about two inches higher than I should be. The hair on my legs (and this is why I say “hallucination”), starting at the most prominent set of veins became something half way between thick vines and a deeply tinted web of capillaries; death symbolically creeping over me.

Then everything went black and I dropped below the water. 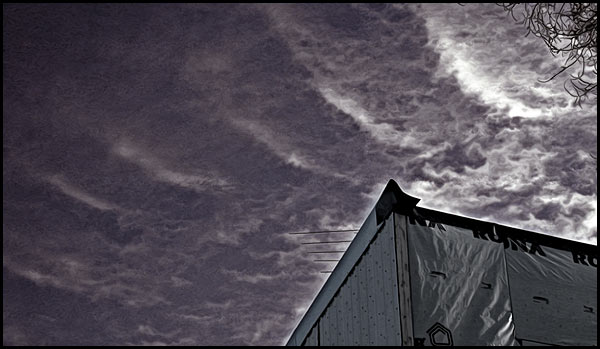 I guess I must have come to a few seconds later — I can't imagine this whole experience was more than fifteen seconds. Anyway, I don't really care if anyone believes me (I don't think I'd believe anyone who told me this), or thinks I just forced myself into a hallucination. To be perfectly honest, *I* don't even know if this should be put in the “you're crazy” bin, or the “you've seen something special” bin. There's a real fine line between the two. In any case, it was extremely unpleasant, and I spent the rest of the day just trying not to pay any attention to my heartbeat lest it happen again! An all around terrifying event (more so afterwards though — at the time it was more a “what the fuck? I think I might die now! I didn't expect that at all!” moment).

That said, the idea that we can kill ourselves just by thinking about it is quite interesting to me!

Other than that, in the physical realm, I hope my fractured rib mends soon because working out with a cracked rib sucks, ha… That said, it sucks less than not working out, and now that I went and saw 300 (incredible movie visually), I'm even more motivated to keep on dining in hell.

From the new “reality TV” show about 20-somethings living in Baghdad, Iraq (via)…

Really, I'm the last guy you should take advice from re: dangerous driving (unless you're looking to be a dangerous driver, in which case I have plenty of advice for you)… but still, even I know that if you're in a loaded fuel truck, running a stop sign when there's traffic that has to swerve to avoid you (or in my case, screech to a halt half way through the intersection to avoid getting hit) is probably not a good idea. 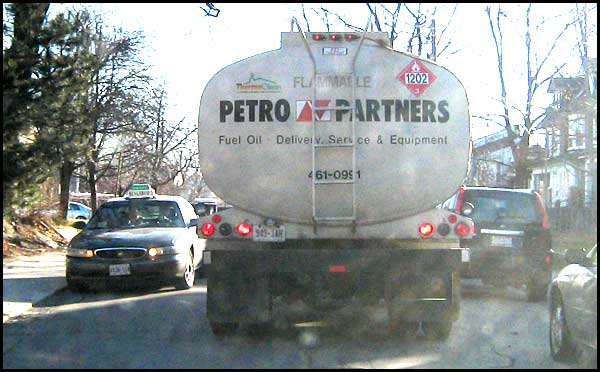 It's not terribly exciting but we got our new development computer in today (the one that Phil and I use, and Roo's computer will start offloading some of its video rendering to)… The OS install crashed half-way through, but we'll get it set up tomorrow — I'm dying to see how fast this thing (it's a quad-core chip) can do stuff like build search engine data. I'm also dying to start optimizing my code for this chip. 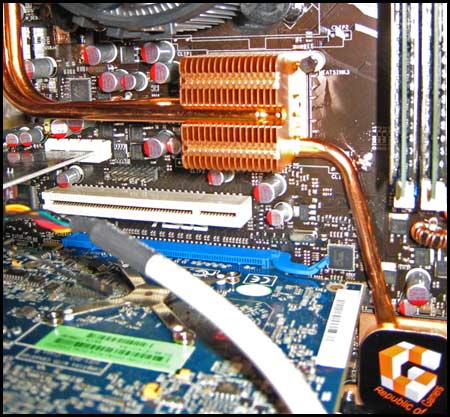 PS. As a point of trivia, the first programming environment I worked in was a dual Z80 CPM machine. Yeah, I'm really that old — it wasn't used. Although “dual CPU” is stretching it because it just had the second Z80 to control the disc drives. So does a dinosaur really have two brains if the second one is just to handle an ass-sized peripheral?

As if I know anything about fashion

I did an interview earlier today about “alternative lifestyles”, which of course included questions about the “mainstream”. I think my answers are probably too abstract to be helpful to the writer, but who knows. Anyway, here was the interview. The bold text is their questions, the rest is my rambling response. It's mostly just archived here for my own records.


[I should preface this by saying that I am answering these questions from a definition of "alternative" that's fairly oldschool and distinct from the fashionable sense of the word... If you asked these questions in a more "mainstream alternative" zone, you'd probably get very different answers, or at least the same answers with a hopeful postscript that you'll buy a $60 t-shirt after. I also don't particularly like the term "alternative" because it's both extremely vague and very loaded.]

Why do people choose to live alternative lifestyles?

People “choose” to live “alternative” lifestyles because not everyone is the same. It's not that they're saying “I want to be different”; it's that they're saying “this is who I am, and I don't mind that I'm different.” So I'm not sure that it's something that a person chooses — whether it's a choice like religion or a choice like sexual orientation or a choice like racial identity is a separate debate. The point is that living that lifestyle is not seen as a choice, even though I'm sure most people could force themselves to hide their identity.

The “average” or “mainstream” lifestyle is just that — an average. It's not the lifestyle everyone shares or desires, it's the lifestyle that most people are most likely to be living. So the people who fall outside of that are “alternative” in terms of their relationship to the norm, but are not acting out in an unusual way in relation to who they are.

I should add to that though that obviously sometimes people choose to mimic the affectations of a particular lifestyle (getting piercings to piss off one's parents, spending a few years in college gay because it's “cool”, and so on), but I don't really consider that LIVING the lifestyle — it's then just a form of cultural appropriation that misses the whole point of the lifestyle… and in terms of alternative fashion that's popular (tattoos most obviously), I think we will in ten years see millions of people with huge regrets because they enjoy the transient fashion, but not the lifestyle, and are now stuck in a lifestyle that doesn't genuinely suit their true identity.

What problems do they face in life (ie. through work/public perceptions)?

The further removed a person's life is from the norm, the harder it is for others to perceive them as valuable human beings and relate to them. So in simple terms, the more different you are, the less easy it will be to communicate, both because of potentially bad first impressions and a limited common ground to frame conversation in. Bigotry's sole cause is ignorance.

In your opinion, what makes a person alternative?

In terms of the way I'm using the word here, a person is “alternative” if they're genuinely different, born that way or otherwise relatively unable to change it. It's absolutely not about having the right tattoos, or listening to the right music, or anything like that…

How popular is alternative fashion becoming in the mainstream arena?

I'm going to assume you mean tattoos and body piercing by that.

Let me give two answers to that question, starting with the glib answer: I don't know, but if it is popular in the mainstream, then it's not alternative.

Now let me give you a more real answer: Alternative fashion and alternative lifestyle are very different things. I think everyone can romanticize the idea of being an outsider or a “rebel”, and because of that the idea of marketing the affectations of alternative lifestyles to the people who live mainstream lives is nothing new… but what's not being understood is that alternative fashion isn't really fashion — it's a side-effect of the state of being that comes with that lifestyle. Fashion is transient and changes from season to season. “Alternative fashion” in this context is not transient — the modifications are permanent — and as I mentioned earlier, there could be millions of mainstream folks emulating alternative cultures in a way that will be deeply self-destructive in the long run. This isn't like spiking your hair because punk got safe enough for you to handle.

It's my hope that people are not getting tattoos because they want to make a cool fashion statement (although I understand that is probably the current dominant market force). It's my hope that they're getting tattoos because their lifepath has taken them on a course where over time they become more scarred and encrusted with modifications to their body, simply because that is their life. I should finish with the most important point though — ask someone else these same questions and you'll get very different answers. To some extent I'm illustrating my other point about people in different lifestyles not understanding each other, because to be honest, I don't understand the mainstream, and I don't like it, and I know there's bigotry in that statement and maybe I should be ashamed of that. I'm not sure. My main concern is living my own life in a way that I find fulfilling and trying to help others who are like me do the same.

So yeah… I don't know if I was hostile, or if I'm tired and not making sense. But for me, it's not a choice, it's who I am, I really have no idea why (and in many ways don't care), and “alternative fashion” really irks me because to me, it thumbs its nose at people who fall into the “not a choice” category. And like I said, I'm perfectly happy to accept that my answers are bigoted, because I can't see the mainstream any more clearly than they can see me.