I mentioned recently the funny murals at the German restaurant here in La Paz, Mexico and tonight I had a chance to take a few pictures of their interior design sensibilities. Personally I like the hotdog guy a lot, but the dude on the toilet is a little crass in my opinion.

Here's two quick photos from the drive home. The first is just a shot of the malecon just before sunset, and the second is of a big boxing or wrestling ring that was set up down the street… It hadn't gotten going yet when we were there so I don't know if we'd just missed El Serpento or if something else was about to happen. 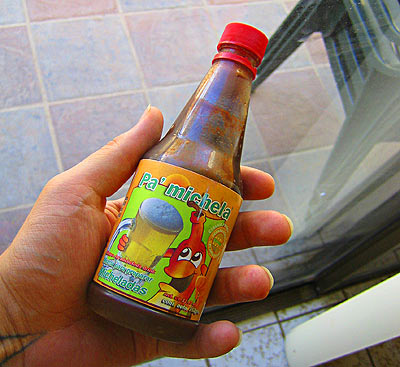 Since there's talk of beer in my main forum, I thought I'd mention a failed tasting experiment I did recently. I'm a pretty forgiving guy when it comes to unusual flavors and combinations but this was really not cool by me. When I bought this bottle of Pa'Michela at the grocery store, I thought it was some kind of oddball beer for kids or something, but Rachel read the Spanish (she's better at that than me) and warned me that it was actually a beer additive.

Ok, that's probably not so bad I figured, maybe it's like a Mexican shandy (half beer and half soda or lemonade) or something. But no! It's vile! It's pretty much the worst tasting beer variant I've ever had — you're supposed to add a couple capfuls of it to enhance the flavor of your favorite beer, but it literally tastes like pouring soy sauce into beer. Now, if I was using it for grilling kebabs or something, maybe that would work, but I couldn't even swallow a single mouthful… the stuff is truly revolting.

So a warning to readers: don't put soy sauce (or Pa'Michela) in your beer unless you're trying to break your drinking habit. Jay is flying in tonight… I had Jordan and Jon both taste it and their reviews were just as bad as mine, so he's going to escape the taste test.

First, something pleasant. The dish below is just noodles (yeah, Ramen) and zucchini, but I wanted to experiment with another hot paste. This one is fresh ground chipotle chiles and almonds in about a 1:1 ratio, with a little garlic powder and brown sugar as well, with lemon for consistency. It's very sweet and spicy with a nice smoky taste.

Now on to less pleasant matters. I've not written much commentary lately so I've got some links to clear out. I guess there's lots of stories about how al-Qaeda's best buddy Bush is helping companies just keep getting richer from the war. On the other hand, it sure sucks if you're Joe Average. For example, take the case of Carl Basham, who signed up with the military to help pay his tuition at a Texas community college. Unfortunately because of the high demands put on troops these days, he was forced to serve two consecutive terms in Iraq, and as a result lost his Texas residency status (what, is he an Iraqi now?)… which meant that his tuition climbed from $500 to $2600, putting it out of his price range.

(But not too loudly)

It must have really sucked to be Carl (I'm sure he was thinking “why oh why didn't I just go work at Costco instead”), but thankfully the media picked up his story and the school back-peddled faster than Pat Robertson begging God to break the ten commandments, and he's going to be able to go to school at the resident's rate after all… too bad the media can't carry everyone's story sympathetically. Not that school is going to be Carl's real problem.

At least he probably stayed in shape in the war, unlike every state* in America.

* you forgot about Oregon!

Anyway, before the Iraq war started women were relatively equal in Iraq, or at least a whole lot more equal than in most of the Middle East — they went to university, could drive cars, were able to receive full inheritance and own property, held positions of political power, and so on. Thanks to the American injection of democracy, it's looking like the basis of the new constitution in Iraq is going to be Islam (that means no tattoos since they're forbidden for Muslims). It begins,


1. Islam is a main source for legislation. — a. No law may contradict Islamic standards. ... 2. This constitution guarantees the Islamic identity of the Iraqi people and guarantees all religious rights; all persons are free within their ideology and the practice of their ideological practices. 3. Iraq is part of the Islamic world, and the Arabs are part of the Arab nation.

Let me say it in the clearest of ways:
Islam State-mandated religion sucks. (Especially when it's Islam)

Now, I'm not saying that some white kid in America can't grab on to some watered down version of Islam (or dumbo rapture-obsessed Christianity or Judaism or whatever) where they pick and choose the parts they want to pay attention to and the parts they want to pretend are antiquated. But I am saying that any religion that tries to take a hard-line version of itself and make it law is unacceptable. I'm not going to mime Anne “in need of an ass-fucking” Coulter's ridiculous statements, but let's take a look at what actually instituting Islam as law would mean (just for starters): Men would have the legal right to beat women (Tabari IX:113), polygamy would be legal, but only for men (Qur'an 4:3), women would receive less inheritance than men (Qur'an 4:11), women would have to wear burkas (Qur'an 33:59), and women violating this law would be executed (Qur'an 4:15), and so on…

Interjection: Hey! It's like The Terminal, only at Gitmo!

Don't get me wrong — literal Christianity sucks just as badly or at least almost as badly. This isn't about Islam. This is about hardline religion in general being a goddamn stupid way to run a country. If a few people want to willfully choose ignorance for themselves, fine, but when they start forcing its consequences on others, a line has been crossed.

So anyway… back in America oil is approaching $70 a barrel (to put that into context, that's over five times what it was at this point during Clinton's administration — don't kid yourself into thinking those economic consequences aren't going to hit hard). Bush is pushing through a new fuel act which “punishes” manufacturers for making small vehicles, but adds no fuel efficiency requirements for large heavy vehicles like the Hummer H-2 — thus encouraging manufacturers to build bigger and bigger SUVs.

Speaking of gas, as you know, crazy Pat Robertson called for a hit to be taken out by the US on democratically elected Venezuelan President Chavez (who is currently preparing for resource wars — local and international — if you're wondering where the hostility is coming from). Chavez laughed it off, but part of his response is quite interesting. He got to power by representing the poor (rather than the rich), and thus has large popular support even though the traditional ruling class are not fans… Anyway, he's been talking about selling gas directly to poor people in America… I don't know what the effect of that would be, but wow it would be funny to watch. For comparison, Venezuelans pay about $0.17 a gallon for gas… Can you imagine if only poor people in America got to pay that, but rich folk in their mega-SUVs had to keep paying $3+ a gallon?

Not that rich people would tolerate poor people being able to afford to drive, hell they won't even let them ride bikes — at a recent “Critical Mass” bicycle rally in Milwaukee, police actually brutalized a 17-month old baby. Since when is riding a bicycle illegal? Not that US cops beating up babies (or banning them from flying) is as bad as UK cops that just kill you on the street, and then try and cover it up.

Meh… who cares, right? Just more of the same…

Now that Siberia is melting, we can expect to see so much methane released into the atmosphere that global warming could spin out of control. Or will it go the other way? Stanford is playing with a bacteria that can metabolize water, which scientists believe could cause a killer ice age, with ice at the equator one mile thick. I like cold weather, but that's pushing it. Well, at least there's a certain beauty in a frozen world — as long as it's not Earth!

…and here's a link I'm saving for playing with on shrooms in Amsterdam.

Oh, and I did a nice interview with Raw Story today, so if that goes to (online) print I'll let you know. It's about undermars.com of course. I do like getting quoted.

Rab just forwaqrded me this event flyer that is using a picture of me as their centrepiece! Pretty crazy, I wonder what sequence of events caused that to happen… I certainly have no idea who they are. And yes, I can shoot rays from my eyes. 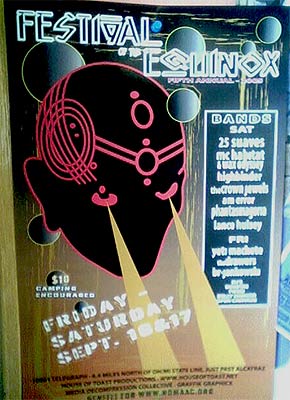 As far as I can tell it's being held by these guys in Ohio. Too bad NOMAAC has such a piss-poor designer… I wish they'd taken a bit more care in copying the tattoo — I hate seeing it drawn so sloppily. Well, I suppose an event that rips off other people's artwork (badly) and has a crap website is probably going to flop anyway, so I guess they'll get what they deserve.

Edit/Update: They sent me an apology and are (as you can imagine) pretty pissed off at the designer that did this to them and me.

I've just posted an image update (public galleries today, members' galleries tomorrow) with a bit over a thousand new pictures. Thank you to all the contributors as always (and for your patience — I'm getting caught up as quickly as I can).

I wanted to explain the current front page poll — “Would you support US military presence and control of the Northern Passage (the artic sea, currently Canadian territory)?” Because of global warming, a sea passage going across the top of the world, under Greenland, across the top of Canada, and then around Alaska, is opening up. Much of the land is becoming increasingly accessible as well, opening up incredibly financial opportunities in shipping and in oil and mineral exploration.

The vast majority of this territory is inside Canadian sovereignty, but Denmark is claiming parts of the Eastern region (and Canada has recently scrambled warships to threaten Denmark's encroachment), the United States claims control of the West, and Russia makes some claims as well. Canada has said (basically) that everyone can use it freely, they simply have to respect our environmental laws… But of course that's not good enough for the US, Denmark, or Russia.

So now these four nations are starting to butt heads over what could be a key strategic region over the next fifty to one hundred years, and barring Canadian capitulation, I expect that it won't be long before you see the US navy start moving up into position… and the fact is that there's no navy on the planet that even comes close to the US, so they'll have defacto control over the North-West passage and thus get to set the rules. Don't think the US isn't willing to violate international law if it's in its financial best interests.

But the escalating tensions with other American nations (Venezuela, Canada, and so on) could be foreshadowing a dark time for the world, with America at the helm.