Later tonight, between 11PM and 2AM EST, I'll be cohosting Saira's Superfly Show on CHRY 105.5FM community/college radio. I used to host the Dilaudid Glide show there years and years ago, which is where the name “glider” comes from by the way. Anyway, it's fundraising right now, so that's part of the reason I'm headed up to help.

Here's a couple of the give-aways they have this year… 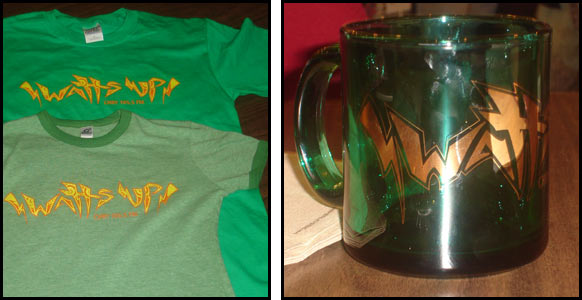 “Watts Up” because CHRY was approved this year for a bigger transmitter.

Anyway, because it's Halloween, I have a Halloween-themed set all ready to go… You can listen online by clicking here (but we'll be on between 11PM and 2AM EST tonight; until then is a wide range of community programming). If you are able to donate, it's definitely appreciated — this is one of the last two (I think) open format shows left on CHRY, so please put “For the SUPERFLY SHOW” in the comments section so CHRY knows that people still think open format radio is important.

So, can I play Murderball?

So I go in for my ultrasound and all they can see on the screen is a large, hard mass. Whatever it is, the ultrasound is just bouncing off the outside and can't image what it is, or exactly how big it is because it blocks the waves from penetrating. So they decide to send me over to radiology for an x-ray to get a bit more internal and external detail.

While I was in the waiting room a Korean woman was freaking out, threatening to “report them”, and generally throwing a tantrum… I guess they'd let someone go in front of her that she thought was behind her in line. She turns to me and say, “they only let her go first because she's white.”

This was sort of an odd accusation because the woman who'd made the scheduling decision was Chinese. For all I know, Chinese racists hate Koreans, but most Chinese racists I've met have a far bigger problem with whites and blacks than they do with Koreans. In any case, I pointed out to her that the people she was accusing of being too pro-white were not white themselves.

Then she noticed I was white, laughed about what she'd said to me, and the situation seemed to diffuse a little. Anyway, so I got a bunch of x-rays of my right knee to try and ascertain what this growth on my tendon is. They gave me a CD of them so I can post a couple of them here. 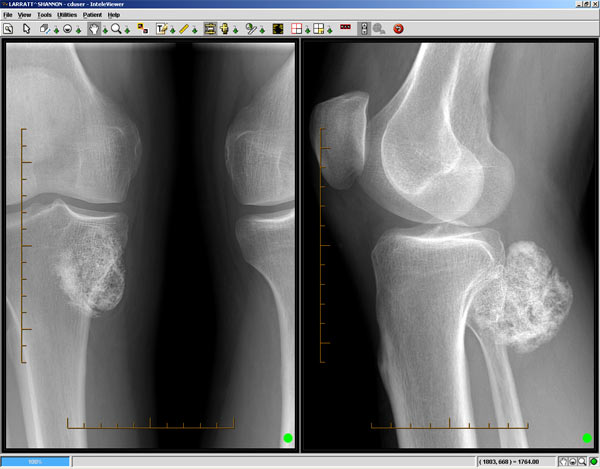 I guess it's pretty much bonelike in density, and it's as large as my kneecap. It's a little sore right now from being manipulated and ultrasounded. I guess that I'll probably get referred to some sort of specialist next. I don't know whether they'll have to do a minor operation or if this is something that can be handled non-surgically. I figure it's been there since I was a kid (although I don't know if it's slowly grown in size, or if it's been like that since the start), so I'm not really too stressed about it.
(Original forum unavailable, sorry)*
Comments (0)

So tomorrow I finally have my ultrasound for the tendon that's got a golf-ball-size something (probably some kind of calcium buildup) attached to it. It's been pretty unpleasant and uncomfortable lately so I'll definitely be glad not just to know what it is, but to be on course in getting it removed. When I was younger I used to fantasize about amputation, mostly because of the pain, but I'm sure that the actual treatment will be far less intense, ha… 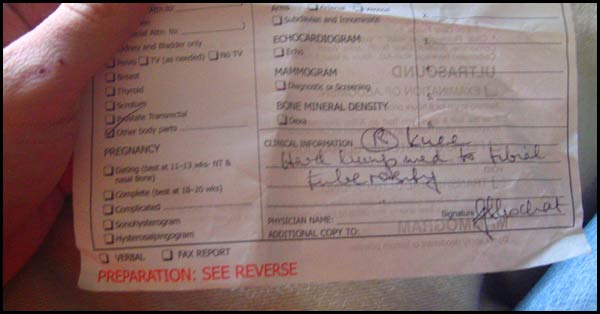 It's funny too — I'm relatively sure that the problem has been there for ages, since I was a child, but since actually discovering it and becoming aware of the tangible physical problem (like knowing exactly where the lump is, and knowing that it's not just “part of my knee”) it's become acutely more painful. Sure, it's in part weather changes, and sure, I'm putting a lot more stress on it because of exercising, but it totally cracks me up to be aware that the increased perception of pain is totally a subconscious placebo effect that I'm powerless to control.

Anyway… I grabbed my truck back today (as you may remember, the muffler fell off), and dropped off the camo Porsche at the same time… It's so funny driving it, people are always pulling up beside me and taking camera phone pictures, and all of a sudden the moms that drop off their kids at school at the same time as I drop off Nefarious start talking to me more — which is weird because it's the same car as always. It's just a different color.

Driving around, and doing it every day as well, reminded me of long ago when I had a girlfriend that I used to give a ride to work every day… I really liked doing that. I think one of the things one misses being self employed or otherwise working out of the home is repetetive visiting with people in a non-home environment, and that's really warming and enjoyable. Makes me miss having a regular job in a way… And miss having a girlfriend (let alone wife) I guess too, ha…

The barbell cracked my teeth

Haha, check out the pierced nipple cookies that Kelly and Phil made and shared some of with me! I didn't clue in to what they were until like a day after he gave them to me. Well, I guess that's what I get for posting that TV spelling error and not explaining it… 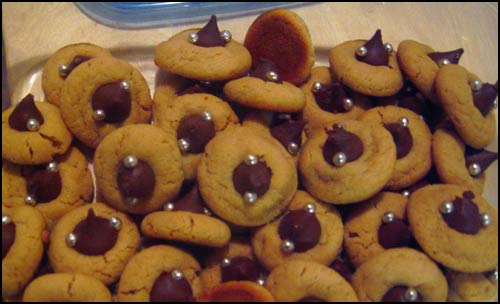 Where the sky burns

So my current fantasy “where I'd like to live” location has moved a little further [true] north [strong and free] up to James Bay (the nub off the bottom of Hudson's Bay), maybe a little town like Moosonee — there's something very romantic about a city that can only be reached via land by train I think. The picture below is linked to the flikr stream I took it from which contains lots more nice pictures of the area. 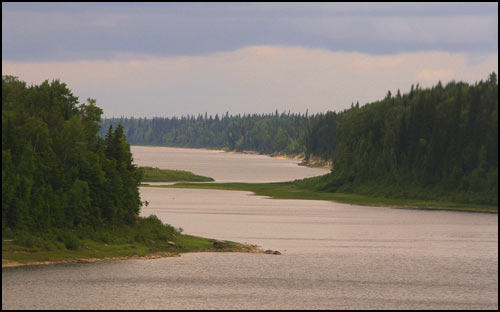 And I do like the cold, but I also love a fire… and I haven't had an excuse to light a fire for the purposes of keeping me warm for a very long time. Outside of the obvious — clean air, fresh water, and vonu serenity — I just love the northern lights. Being this far south, I'm lucky if I see them once a decade. The last time I saw them was late 2001, here in Toronto amazingly, and in full colour as well. I think I'm most split on the “where to move” decision as a parent (and as a single parent, because neither Rachel or I want to make a decision that's going to make life a pain-in-the-ass for the other one), because there are so many strong arguments for both rural and urban upbringing… There are massive benefits to each, and with each come losses as well, and because my own upbringing is almost entirely rural, it's hard for me to relate to all the options.
(Original forum unavailable, sorry)*
Comments (0)