I've been putting it off (or I should say, my busy schedule has been putting it off), so I think on Thursday I'm going to go pick up a couple 100cc engines and mini-CV transmissions (like they use on pocketbikes) and build a proof of concept twin-engine go-kart (one engine drives the right, one drives the left, with caster wheels at the front)… I don't think I'm going to build the full-sized snowrail around two engines, but I at least want to give the idea a shot.

Other than that, I've got a long overdue article/interview on microdermals almost ready to go. I'm just waiting back on a few responses, but I hope that'll be up for the weekend.

That video makes me miss Mexico — part of it looks like it was shot in La Paz where I lived for all of 2005 (which is also the finish line for the race)… And it makes me fantasize about a plague that kills off enough people that there are effectively no road rules — or rules that you have to stay on the road — and plenty of gas and alcohol to play with.

I wonder… if a passing comet turned almost everyone except me and a couple of valley girls into red dust and/or zombies, how much internal-combustion-usable pure alcohol could you distill from the contents of a liquor store? I think you need about 96% alcohol to be able to burn it in a standard engine. That said, I know I can get over a thousand gallons a year per acre of sugar beats and a simple still (and get some moonshine at the same time), so why bother.

Not that I'm expecting Night of the Comet to be any more prophetic than, well, prophets in general.

I guess I'm not the only nutter…

Timmy just sent me this picture of another recent Porsche that's been painted camo! I figured that I'd be the only one to do something this sillyhillbilly, but I guess that Europe's got a couple people with a sense of humor about their toys as well. 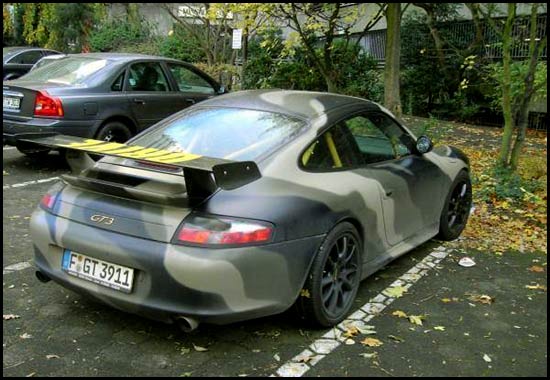 PS. Check his page for a funny photo of a beer can getting shot out of a spud gun.

So I'm picking Nefarious up from school and there are a few other parents waiting for school to finish. Among others there was a woman that picks up her kid every day in a cab (so she was up at the school doors, with the cab waiting on the street), as well as an Indian guy picking up his kid. These two parents in theory should know each other because they've been at school BBQs and so on together, having children in the same class.

The woman's kid comes out first, and she says to the Indian guy, “let's go now”, and walks to the cab. He looks confused for a moment, and then realizes that she thinks he's the cab driver — even though the Indian guy driving the cab looked completely different other than being of the same general ethnic group. She couldn't tell them apart. It was pretty funny, and he had a good sense of humor about it, but I imagine it was a little disheartening…

It reminded me of the ST:DS9 episode where Quark and his brother and nephew travel back in time to cold war America and Quark comments that “all huuu-mans look alike”…

Fear of the Dark

So other than having nosebleed seats, the Iron Maiden show last night was great (especially the second half of the show — no offense intended to the new album which was the first half). The cool thing though about being way up is you get to watch the crowd motion as well, which is really fun from a nerdy point of view if you've done work with particle effects and so on.

The ACC was totally sold out, and I guess they've sold out all of their Canadian dates. When we were going in I was surprised at how few US dates there were on this tour — per capita, Canada got something like seven times as many shows! I don't know if it was just concert-talk-BS to hype up the crowd but on the next tour they're not going to bother with more US dates and just tour across Canada because they so consistently sell out… Heavy metal and mullets, right?
Pretty fun though seeing a band that I've been listening to for twenty years and never seen live — I was worried I was going to regret skipping the Mojave 3 show because they were on the same date. If you want to see a really crappy video of a part of the show, I posted it to the $1.65 billion website. I saw a bunch of Iron Maiden tattoos as well, but didn't have a chance to take pictures.

Anyway, now it's time to do some work…

I have an extra ticket to the Iron Maiden concert tonight. If you want to come along with us, please message me (or better yet, telephone me) if you'd like to come ASAP! The show is at 7:30PM at the ACC if I remember right. [taken]

Other than that, I should have my car painted by this weekend with any luck. I really hope it looks good — there's a mockup below. It's either going to look amazing or lame… I want to sell the car (what am I thinking making it more unsellable then?), so maybe I won't have it long enough to do so, but I'd really like to rip out the interior and replace it with a drab green canvas… 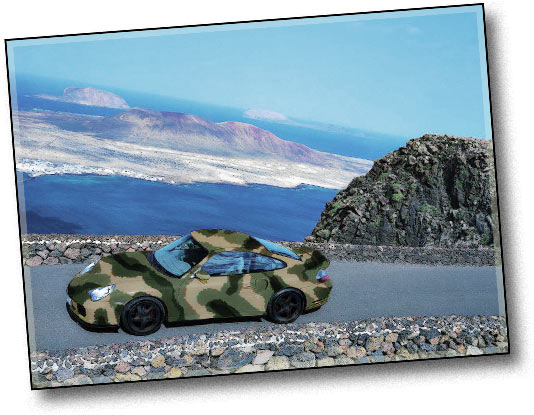