Among many other activities, we painted this today, in acrylic on a 16″x16″ wood panel. Nefarious drew it (right on the wood) and I painted over her drawing, titled “Princess Khan and The Golem”. The girl is based on one of her dolls and an East Indian friend, and the other figure is the Golem — we recently read the really wonderful (and intense) David Wisniewski telling of Judah Loew ben Bezalel’s Golem… I love painting with Nefarious so I’m sure I’m biased, but I think it turned out really nicely. 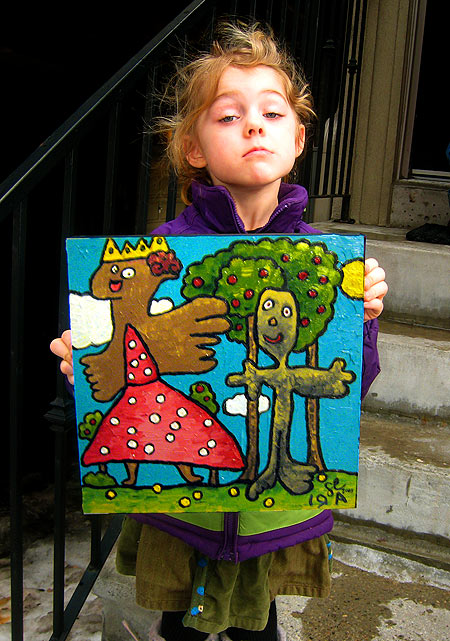 The hilarious expression is typical! I think my next project is actually going to be a self/group portrait based on this picture, taken after Nefarious made tiaras for all of us a few weeks ago.

I think I’m happy with this painting and consider it “complete” now. A reminder for anyone seeing only this entry that the painting was very difficult to photograph accurately because it is painted with iridescent pearl pigment. With this completion I don’t have any major painting projects on the go, so now I have to decide what to tackle next.

Click to zoom in, and this painting is currently unsold if anyone want to make me a reasonable offer. 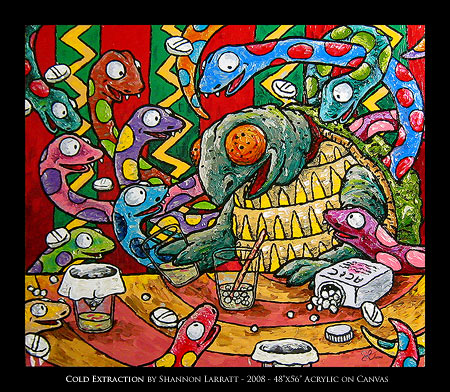 I spent a little more time on this painting, colouring in the initial snake set. It’s really an impossible painting to capture because it’s painted almost entirely with iridescent pigment. I also thought it looked a little unbalanced so I added a few more snakes to the scene and am now much happier with how it’s turning out. Click to zoom in.

This painting is not for sale, but I will trade it for appropriate amounts of opiate-containing pills. Note to lawyers: that’s a joke. However, I will mention that there is codeine mixed into the paint, not that there would be any way to extract it from the paint in any non-toxic form. 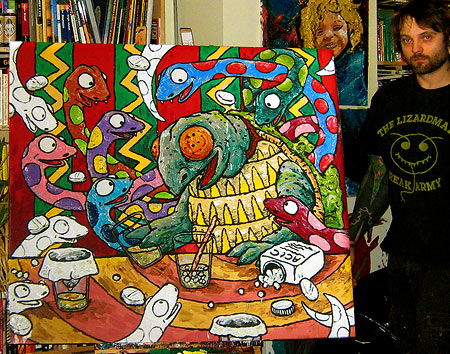 I have to get some lights for my house. I bought into this “15 watt fluorescent bulb” scam where they tell you it’s equivalent to normal lighting, but seriously, I might as well be painting in the dark. It’s ridiculous. I work during the day and generally end up squeezing in painting to the evening… I’ll probably just cop out and put standard 100 watt incandescents in, which are nice and blinding.

I was told today that my shirt makes me look dated. 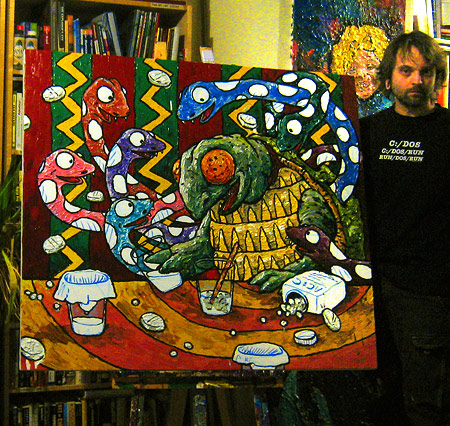 Anyway, some of the snakes need to be lightened a bit, and some need to be darkened a bit. Then the spots, the rest of the codeine extraction paraphernalia, and this one is done other than the frame… And judging by the photo, I need to get some sleep!!!

It’s been very hard finding time to paint lately… work, work, work, definitely making me a dull boy. I painted the shell of the turtle today as well as roughing out the pills. You can click the picture to zoom into a bigger shot, and if you’d like to see some textural detail, click here. 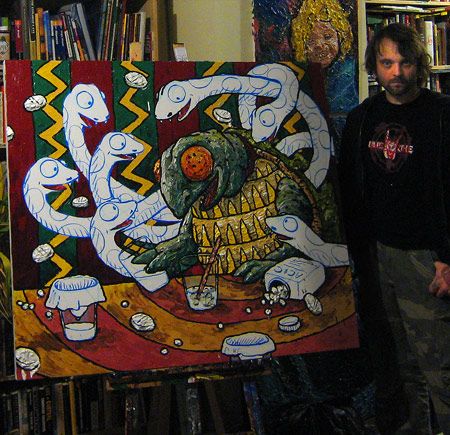