Another day, another needle

First, my finger is doing pretty well so far using Tom's advanced healing methods. Right now I'm on Neem pills, Simple Care (a Neem aftercare product), Vitamin C, and Yunnan Paiyo (used to treat battlefield injuries by the Viet Cong I believe). It's pretty wild — I'm not much more than twenty-four hours in, and the swelling is already down a lot, and it seems to be healing quite well, to the extent one can be aware at this early stage.

From left to right that's a shot of my finger this evening, the meds, and the diagrams I used to explain what happened to my finger to Nefarious so she would understand and not freak out about it.


Conspiracy time:
Many of the herbs that can be used medically can be traced back to the Vedics (7,000 BC). Vedic poems describe what appears to be genetic engineering, nuclear power, and a great deal of advanced knowledge (and thus these poems are often described as the earliest examples of “science fiction”). Anyway, the herbs producing these medicinal effects use a significant percentage of their energy producing these drugs for us. Ask yourself this: what if it's not slow evolution, but what if it's an early example of GM crops? What if the Vedics actually bred these plants to produce these chemicals… I mean, we're doing it now, so if our society died out, the planet would have these odd little life forms because of us…

OK, I don't really believe that but it would make a good story.

Other than that, if you didn't see Anna and Cutthroat on Wife Swap, be sure to get your hands on a copy. I thought Anna especially came off incredibly well (a lot better than in MODIFY, although I think Cutthroat is hilarious and highly quotable in that).

I also did a hard confirm on the BMEfest afterparty space this evening, and went shopping with Phil for soaps and such… So I now have lots of nice bubble bath stuff and beeswax candles and all that. I visited my friend Leila as well — she showed me the jacuzzi tub she had installed a couple years ago and has never used! I was mortified! I love baths!

Well, I'm going to watch Survivor now…. I hear today is the merge.

PS. ModBlog got updated of course.

The implant removal was pretty intense, but Tom was very professional and did a wonderful job for me. I've taken lots of closeups of the removal and have some additional commentary on neodymium, the way it was coated, how we could make these work better, and so on. Anyway, I'll put together a full article that'll probably go up on Friday or Saturday. 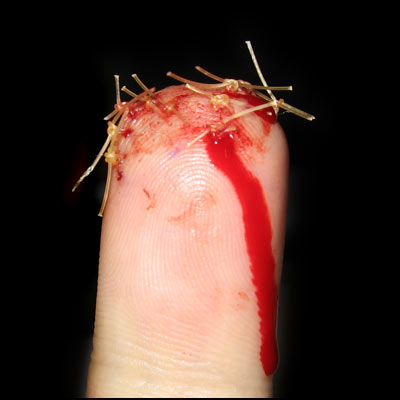 Christ or Finger?
I'll say this with more certainty in a week, but the four single magnets are probably all gone… However, I just found out today that one of the clinical uses of neodymium is for extending the lives of lab rats. The toxicity information that's out there is almost all for inhalation, which is very different, and I'm being told that the little information there is on how it behaves in an implant is leaning toward “don't worry it”…

That said, I sure feel less stressed without a couple big black patches on my fingertip and won't replace them until the design problems are corrected! Anyway, I've got to go get my recording gear ready for the screening tonight so I'm off now, and I won't be able to update ModBlog tonight, sorry.

They have to come out today I think…

I barely slept last night — I kept waking up every half hour in what was almost a panic attack I think… The STAY CALM tattoo was definitely getting a workout. Anyway, the reality that I may have done something that could either kill me or at least take real years off my life is very sunk in at this point and it's kind of disturbing! So yeah, I think today I've gotta cut them out!

Not me literally, but my old friend Tom Brazda is going to be cutting them out for me… I think we'll make a fairly large flap cut so we can really make sure that we can get it all out if it's started to oxidize and break apart (which I believe has happened).

Wow, another long, long day. I got up not too early today, around seven, and worked for an hour or so and then Nefarious got up and we watched a little Bernstain Bears (a promised reward for being really good the evening before) and then cooked up and split an ultra-hearty breakfast (diner-style homefries with onions and so on)… But don't go thinking I'm a good parent or anything — here's Nefarious playing with nunchucks. But they're padded trainers.

Phil came along (and I should mention that he needs a date to a very cool elite sideshow party — check his page if you want to go) so we could head out to Future Shop to pick up all the gear for tomorrow night's screening of MODIFY here at the house… I also grabbed some speaker stands, a UPS, and a wall mount for my LCD monitor which I'm using as a bedroom television. Oh, and here's what was in the parking lot of Home Depot:

I think that truck on the left is fairly expensive but I don't really know. But I can tell you that I could build you the truck on the right for a parts cost of under $4000, including the truck… and really, which is more fun? I'd say the one on the right is a far cooler vehicle.

But anyway, so I plugged in the UPS, and a massive spark shot out of the plug, and I could see a flash of light from inside the unit. At the same time the lights went out since it had flipped one of the breakers… Nice… So then I put together my speaker stands… oops… my “little” speakers are too heavy and the units won't stand up. Luckily I checked and the return policy makes it a non-issue…

Then I moved on to the monitor mount. My LCD has a folding base that stands it up on a table that I think looks pretty lame when you see it on the wall, even though it mostly folds flat. Unfortunately it is not “officially” removable, so I decided to try and take it off anyway… I unscrewed everything, but apparently they've designed it so you can't get it apart. No problem — I just cut the base in half with a jigsaw! Yeah, one of my favorite tools is a Sawzall… 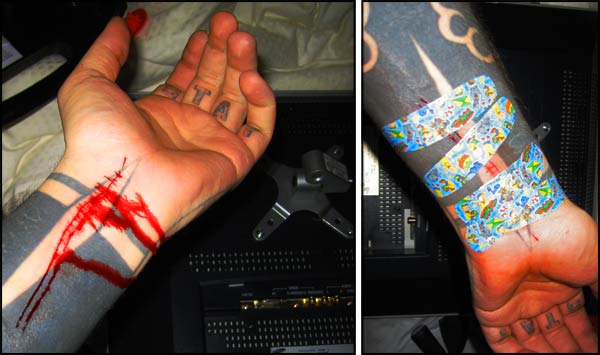 Anyway, there were still bolts in the side (which of course had epoxy stuck all over them)… I had to really squeeze the pliers in to grab them, so I couldn't get a very good grip. They did come off in the end, but at one point the pliers slipped and crashed into my forearm… an instant later blood was pouring all over the place. It was sort of a surprise because the cut was very shallow — and I didn't think I could even cut myself with this tool — but I guess because it was really hot and I was hopped up on caffeine, I bled like crazy. Calliou bandages saved the day.

But the TV looks awesome on the wall (Phil helped get it straight) — I even drilled through so there'd be no cables hanging… I might end up doing the same for my speakers. When I have a chance I'll swap the stands that don't work for wall mounts I think. 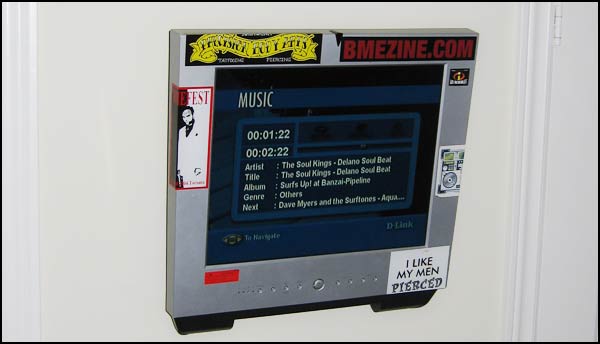 We have the 50″ downstairs of course so this isn't generally where I'd watch TV, but I like listening to music when I go to bed… Other than that, I also went to the dump today again, and I noticed that as you drive in they scan your truck for radiation:

I'd never even considered that people might be trying to dump nuclear waste (ok, probably there's a simpler explanation) down in the ports, but hey, I guess the kind of person who would dump nuclear waste will probably put it anywhere they think they can get away with it.

Oh yeah, and I've added quite a lot of new posts on ModBlog today. That blog has built up a nice readership, and I think people are enjoying it, but I'm still considering what it's future will be… I'm in part considering phasing out publishing it, but still writing it, so it can go exclusively to print publication, but I'm not sure yet. And now, I am done for the day! Whew!

Our house is getting better all the time!

So, almost two weeks ago I ordered a wireless music bridge from Staples. It's a product from Linksys that lets you stream audio over your wireless network from your computer to your stereo. They told me it would be delivered in a few days… Well, it never came so today I went in and got a refund for the order (they couldn't even tell me how much longer it might be). There was a Future Shop across the street, and they had in stock four or five competing models that could do the job.

In the end I went with a D-Link DSM-320, which lets me stream audio files, photo slideshows, online content, and movies to my stereo and television (and control it all with an on-screen display and a remote). Plus it was the cheapest one there by far (about $200 Canadian), and now that I am single

and have to manage my own finances, I'm all cheap about everything! The interface on it sucks (hello, I could use a real FF button) and there are definitely bugs (it crashes if I want to play music because I have so many MP3s; but I have a work-around in place), but so far I really like it anyway.

I kind of want to get some new speakers for that room, but I'm not sure if I want to spend any money on that sort of thing right now… But I will need to get some new speakers at some point, some furniture to put all the gear on, some kind of mounting so I can hang the TV on the wall, and then other “bedroomy” stuff like beeswax candles (oh how I love them)… I guess I'll try and indulge all my tastes that clashed over the last half-decade? I guess that's one of the “good” things about a breakup like this (not that it doesn't suck big-time for a zillion other reasons) — for example, Rachel and I had very different taste in music, and different sleeping habits, so now I can listen to all my shoegazer, ambient, and dub stuff at night without making her crazy!

Anyway, now it's time to do some building of a new geo-location database for BME!