There's a BME update (images, all sections) processing right now, but I'm not sure yet whether you'll actually see it later tonight or first thing in the morning. When I uncompress it on the server, you may see the site go offline (temporarily) if we decide to turn off web services while it's happening. 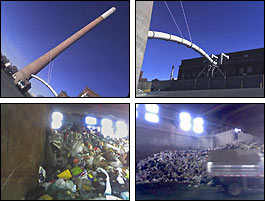 Slow day today on the whole. Michael and I did a run to the dump down at Cherry Beach, but we were early so we went out for lunch at Kubo (a pretty decent place at Queen and Logan; if I'm there again though I'll go to Pulp I think). We drove around the ports for a while, and then when 3:30 hit got weighed and dropped off 170 kilograms of crap. It's enormous fun throwing bags up onto the mountains of trash.

As well as that and general work, Nefarious and I did a bunch of painting (right)… The top painting (the one that's pixelated to hide what's coming) is mine of course and the more abstract piece is hers. She gets to use any paints that are left on my palette when I'm done with a given colorset. I think it's actually the first time she's gotten to paint with anything this thick (she's using acrylics with textured gels and modelling pastes mixed in) so it's been as much experimenting with how paint moves as being representational.

Because she's using my left-overs, I have some control over the process even though I've taken no role in applying it… I figure that as long as I provide colors in an interesting order, it'll turn out alright.

Well, now to create about six hundred new user accounts from the update, write up and post my ModBlog entries for the day, have some supper, and then try and relax for a while… Rachel is coming here to visit (and then we're all off to Edmonton next week) on Thursday or Friday so I have at least a little time to make sure everything is clean.

You used to be able to find a gallery of it with better photos and the full text of the Vault/Gauntlet interview on her site, but it seems that those things have fallen off the Net… So, since I've been so terribly neglecting the BME Encyclopedia, I've finally gotten around to adding information about Mistress Ilsa Strix and the 5,000 piercing scene she did back on my birthday in 1996 (coincidence of course)… I am of the opinion that this is the current world record and has been since 1996 — no matter what claims Golden Palace may make to the contrary. 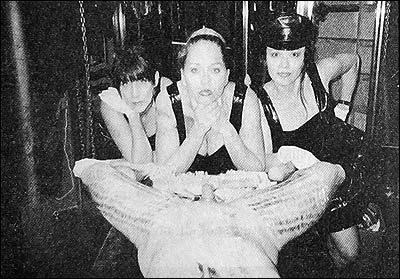 Click for more information
I really should make a commitment to make one addition a day to that project… Really, if I can keep posting to ModBlog, I don't see why I can't shift some of that effort to something more productive!

First, let me tell you about the very yummy stirfry sauce I made today. This was for some broccoli, fresh corn, and onion with chubby rice noodles. Take half a red grapefruit and squeeze out the juice into a cup, and then add soy sauce to make the mix 50/50. Then add a tablespoon of raw unprocessed honey, and some dry roasted garlic (done!)… A very delicious sweet and sour sauce! 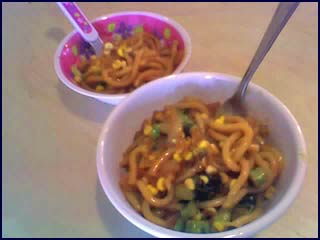 Oh, and to Saira: thank you soooo much for getting a toy that teaches how fun punching is. Apparently though both Rachel and I okay'd this months ago? 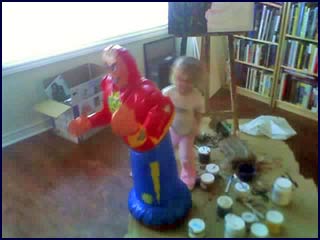 Now, I'm no prude, but I've got to say that cartoons these days are getting pretty explicit. I'm pretty weirded out when they do the opposite and airbrush genitals off of animals in kids shows, but putting fat human looking genitals on a dead tiger seems a little racy? 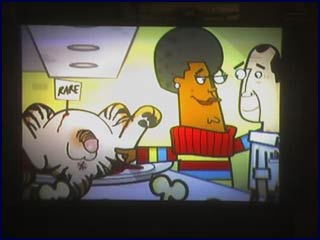 Finally, and here's where [temporarily as it's a gift] I hung the new painting: 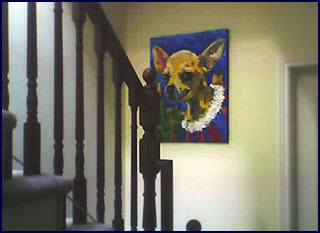 It wouldn't surprise me if it makes very little difference (I'm a strong believer that genetics plays a far stronger role in your final development than environment), but I think it's quite healthy for Nefarious to be growing up in a house that's full of art top to bottom, and an environment where art and technological projects are constantly being fulfilled…

Well, I'm going to go read a magazine in the bathtub.

It is far from my best work, but I think that the painting “Tater joins a Mexican circus” is done. It feels a bit sloppy or something… There's a ton of paint on it… If I had to guess, I'd say there's a solid three liters of paint and gel on the canvas. 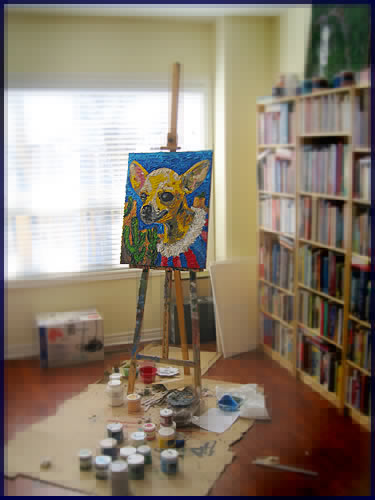 Anyway, slow day today and yesterday just hanging out with Nefarious and Saira and Michael…

Before I begin this entry, I want to make sure that everyone reading it understands what emergent behavior is. Basically what emergence is, is when you have a complex system made up of simple parts, that the system exhibits complex behavior rather than simple behavior. So for example, while no individual cell in a human is conscious in the way that we use the word normally (let alone being capable of the things humans are capable of), when you bring the whole set together, something much more complex emerges with a whole set of abilities that the component pieces don't have. The cells, while acting individually also act as a whole and create something new and special. This concept works on many scales; an individual ant is pretty dumb, but as a colony they act in unison and create something that's “greater than the sum of its parts” so to speak.

I'd also like to ask the question “what is God?” To answer that, I'd propose that God is relatively omnipresent (everywhere at one), omniscient (all seeing), and omnipotent (all powerful), as well as being connected to us on some level and playing a role in our creation, life experience, and development. I'd also suggest that by understanding and having a relationship with God, that people can discover their role in the universe, and learn how to live the life you're “supposed” to live.

Now I'll repeat a little of what I've mentioned in past entries and start talking again about microbial life. Microbial life makes up the vast majority of life on this planet and is deeply intertwined with all life here, microbial or not. For example, if you take the cells in our body — that which make up the mass of what we perceive as “the self” — only about 5% are explicitly human in nature (cells containing human DNA). The rest are a huge assortment of microbes that live “in us and on us”. So the overwhelming majority of what we think is “human” is in fact microbial and non-human.

Most of this microbial life (both in us and around us) is parasitic in nature. That is, it can't survive on its own, and gains its nourishment from us, although often contributing a great deal in return. This life is integrated into all the systems of our body, digestion and the immune system being the most obvious examples, but even our brain is teeming with microbes — our thoughts and memories are as much microbial life's thoughts and memories as our own. In addition it should be noted that much of this microbial life extends far beyond the reaches of our own life (even though we can barely perceive that consciously) — some is inherited from our parents, some passes from person to person (or animal, or plant), much of it lives longer than we do, both before and after, tying us into a complex system far, far larger than ourselves. Of course this microbial life is also communicating constantly with not just us (its host), but also with other microbes (a parasitic lifeform which can not maintain balance with the life around it does not survive) — and presumably exhibiting emergent behavior (and consciousness on some level) as well.

The interaction between this microbial life (and the microbial super-entity that encompasses nearly all life on the planet) and us is largely co-operative rather than competitive. As I mentioned, because it's parasitic, it has to keep us healthy and successful in order for it to prosper. So for example, the “bugs” in your digestive track can consume some of what we eat, but they have to then excrete something we can use in return. If it goes out of balance and harms us, other microbial systems (in our immune system and so on) do their best to balance things out in us, and if that doesn't work, they do their best to strengthen our offspring (which is why animals with bacterial imbalances often have larger children than healthy animals).

We're not just a warm, fuel-filled flesh bag for the construction of Bug City though. Some of the microbes can't even reproduce on their own — many hijack our DNA engines almost like a retrovirus, rewriting strands so that our human cells have non-human offspring… Other microbes permanently rewrite our DNA to add themselves to our programming, so even our children's cells will produce non-human microbial life! Our destinies and evolution are deeply intertwined.

But for me, perhaps the most interesting thing about the microbial super-entity is that it also “edits” our DNA in order to help itself — and as I said, if a parasite wants to be successful, the best way to achieve that is to help its host become successful. While that normally happens using conventional means, it also happens by active modification of DNA in order to cause mutations that are beneficial for the microbes living in that host. That is, the microbes are editing our DNA in order to cause us (and all life on the planet) to evolve. It's not random. Please think about the implications of this — they are using us like tools to facilitate their own lives, and by “upgrading” their “tools” they upgrade us in the process.

So what we have is a series of arguably sentient and conscious overlapping complex systems, each of which is modifying the others and themselves to improve them and to make them work better and be more successful. Evolution is being fed by a self-sustaining feedback loop — we are a self-improving machine, and evolution is not a series of random mutations, but a series of intended mutations, electively chosen by “ourselves”. The system is learning how to improve, and acting on what it learns… and while no single microbe understands “why” it's making the precise changes it's making, because of emergent behavior, the system still moves forward with directions issued from a highly intelligent invisible hand that is both illusionary and very real at the same time.

So what we have if you look at microbial life and life in general is a singular system that connects and controls all life on the planet (omnipresent and omniscient certainly, and as omnipotent as one can be). It also has played a role in our creation, the way we experience life, and our evolution to what we are now. From dust it created us — from dust we created ourselves, as an act of will and intellect… I would argue that this microbial superbeing is God, and thus, as a whole we are God, and as individuals we are the sons of God. By learning to understand our relationship with and inside this superbeing, we learn what our role in it is and how we can best live to ensure the continued survival and prosperity of “God”. At its simplest, I would suggest that some level of universal love and respect for all life is a good foundation. 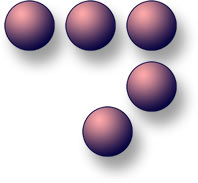