Will the madness ever end?

So Roo calls me up a bit after noon and asks me if I'd like to come swimming with him and Allana. Of course!!! It snowed earlier today, but had stopped unfortunately by the time we went out — but we did have a lovely icicle-covered bench (which Roo braved for these pictures by Phil). I just wanted to say publicly a big thank you to Roo and Allana and everyone who's been coming out swimming — it's been a great experience so far and and made me really happy to be a part of.

Who'd have thought that jumping into an icy lake on a regular basis would be so fulfilling?

I've heard now of at least three other groups of people who are regularly swimming in Toronto… Now to try and get in touch with them! Oh, and I think we're going to go for a dip tomorrow night just after dark (so everyone can still get however tipsy the host allows in their studio), so if anyone wants to come, get in touch with one of us or email winterswim@gmail.com.

Shock to the system

I had a nice day today on a variety of fronts. I went and had Egyptian food for lunch (I wasn't really sure what to expect and was pleasantly surprised), and then saw Children of Men (at the very crazy front set of seats — but if you like movies like The Omega Man meets, say, 28 Days, I think you'll enjoy this no matter where you sit). I wanted to top it all of with a swim in the lake, but I forgot to wash my gear and my car already stinks bad enough.

Quickly, some pictures from the noon solstice swim that I needed to get posted so they can be moved to the main winter swimming site. If anyone took photos at the midnight swim, please email them to me at winterswim@gmail.com so I can process them and post them… These are pictures by Phil:

First, some pictures (by Saira) of Roo and my swim yesterday… There were some folks kayaking as well because it was such a nice day. I know that some of you are coming out for Polar Bear Club dips in Toronto and Ottawa, but consider joining us regularly… It's extremely good for your health and spirits.

I've been thinking so much about Paleolithic man (and man from earlier timeperiods in general), and creating a way of living and exercising that builds the body and mind that would dominate in that era… There are so many things that “lesser” animals can do — even simple stuff like run or otherwise exert oneself all day long — that modern humans are incapable of. I am convinced that the process of losing this connectivity to our bodies is deeply connected to the process of losing our connectivity to our planet.

If you want a story illustrating that modern humans are decaying, even in terms of how far we've fallen in the last few hundred years let alone ten thousand, take a look at the English longbow. It's a beautiful and incredibly powerful weapon, but there are probably less than a dozen people on the planet who can fire them at full range, because modern humans just don't have the lean, dense musculature required to use such an elegant yet still high energy weapon (let alone the dedication and skill).

I told Shane (Faulkner, King of Fools, Toronto) that I wouldn't post the tattoo for a week so the shading would show through the colour he laid over top of it in the background. I guess the next session (which is about ten days after my biopsy, so I don't think it'll collide with any surgery) will see the figures, chains, and the rest of what's left coloured as well as the barn. Here's a shot that Saira took at yesterday's swim. 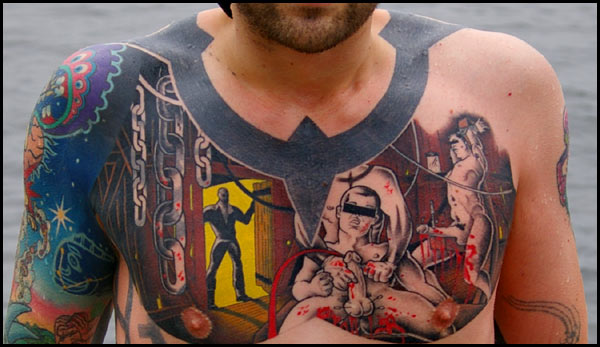 We're just about done, so I need to put together the artwork for the rib/belly panels that finish the chest… Each panel is as sexually explicit as the top panel (exploring the cultural and personal importance and necessity of the expression of sexuality, especially extreme sexuality, is what I consider to have been my “life's work” and passion up to now), but in a different theme.

Other than that, I've slept something like 24 hours in the last 48 hours. It's crazy, given that I usually only sleep three or four hours a night. I'm not really sure why I slept so much but I feel like I've been very wiped out… I imagine I'm quite sick, but because of the winter swimming, I don't exhibit most of the symptoms (that's one of the 'benefits' of swimming in the cold).

Last night I went to bed early (I think around eight), and a friend called me and I'm like “what time is it?” and they're like “ten”, and then I'm all confused (“in the morning?”) because I don't know why it's so dark. Anyway, time to process a few more Winter Swim photos and then off to the gym.

I've felt really sick the last couple of days, and just keep getting more and more tired out. I've got to admit that I'm really looking forward to surgery and getting this all over with — what a strange transition going from twenty years of continual pain, to finding out it's a physical problem not a psychological problem, to solving it (and wondering what damage has been done by treating it using the wrong method). Anyway, lots of work to do today and then a noon workout and then a swim in the lake to help snap me out of it! 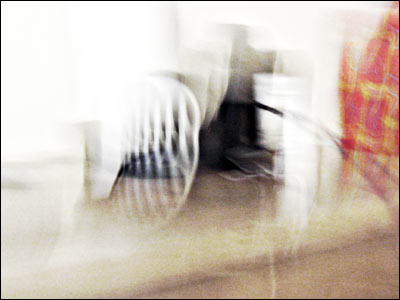 Now I think I'll do some carving before getting back to accursed programming.