Bring on the rains!

Well, Hurricane Otis is coming up out of the South Pacific and bearing down on us. It's calm right now, but I got woken up this morning at perhaps 4AM by massive rain and wind shaking every door and window. This place is pretty solid and on high ground, and La Paz is quite sheltered, so you don't have to worry about me (but I hear they're thinking about evacuating parts of Cabo San Lucas). Worst [reasonable] case, I just get very very wet… 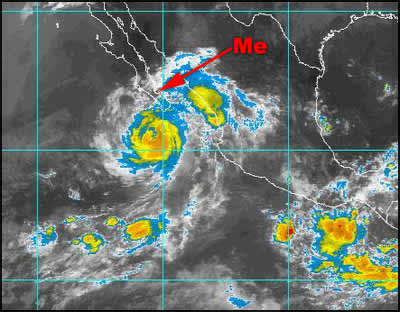 The thing that sucks though is that it might affect the visit from CT as well as the return of Rachel who I miss like crazy… Anyway, I'm going to do a BMEvideo update today, but I'm not sure that I'll be able to upload it today because there's so much line noise that my DSL keeps dropping (as does the audio telephone connection sometimes as well). 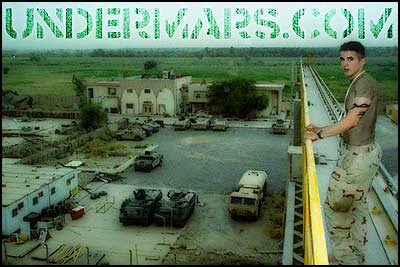 I just made a small update to UnderMars.com with some pictures from Kuwait and Iraq (fairly mundane pictures, just safe stuff). Thanks again to everyone helping out with that project. I just got the following email which I thought raised an interesting point:


I am unsure whether or not you will open this email, as I'm sure you may not open all your emails, especially with all the publicity the website is recieving lately. I am the wife of a US soldier currently serving in Iraq. Sir, it is my husband's second deployment and I am fiercely proud of the work our men amd women are doing. I appreciate your website for so many reasons, but would like to point out, as you may have already heard, that these photos may incite those we are trying to work with out there.

I know what I am saying is not new to you, and I know it may not matter. What matters to me, sir, is that if the higher ups in the military decide so our men and women may no longer be allowed to use personal computers or cameras. This is one way so many of our men and women in uniform keep in touch with their loved ones, and I wanted to make sure that that possibility is known to you.

Sir, my husband being able to use his lap top to send me emails and to chat online keep his morale up. These deployments are long and hard, and contact with his family helps him keep the mission in focus. I know this email doesn't change anything, and I sincerly hope your website doesn't cause the military to reconsider it's stance on personal computers and cameras.

SuicideGirls vs. the FBI?

Adding to the boingboing post, I've been debating whether I should comment on this recent “SuicideGirls gets banned by the FBI” thread that's been doing the rounds. For those that don't know, SG recently took down a number of photo sets from their site, making the strongly implied claim that they'd been forced to by the Bush administration (and then a few days later backpedaled saying they'd gotten no such request and were doing it “preemptively”) This happened at the same time that a large number of their models were quitting due to workplace conditions, underpay, and claims of various forms of abuse [edit: to be clear, these are their claims, not mine], as well as a criminal case by SG against one of their competitors (more, more, more, more, more, more, more, more, more, more).

It's sort of infuriating because BME actually is, or at least was, under serious risk of this type of prosecution, both on 2257-type issues and obscenity issues. To be very clear, SuicideGirls is at effectively zero risk of this type of prosecution. For SG to be targeted, it would required rolling obscenity laws back to the 1950s since numerous established cases more than protect their content, and in any case, were the government to decide to prosecute such material, SG is one of the most softcore sites out there and would definitely not be a primary target. Whether you support “real” porn or not, you've got to at least respect Flynt/Hustler and Black/Extreme Associates (more) for having the strength of character to fight for what they believe in, unlike SuicideGirls who appear to be saying “how high” before being even asked to jump.

SG also made a number of associated implied claims about not making large amounts of money (they make a ton of money), not trolling other sites for girls (hello, why were you on IAM/BME, where did many of the early girls come from, and why were you ultimately removed?), and treating their models well. The last one sort of bugs me, because in terms of non-compete issues and payment issues, SG rates low on treatment of models in the mainstream adult industry in my opinion. That said, I don't really have a problem with them making misleading statements in this arena, because that's just business and their right to run the way they want to.

But getting back to the main issue — removing images — I'm really disheartened by it. Short of them trying to trick the FBI into going after their competition or garner up some free PR or something really dirty, I don't understand it one bit. If the core statement of risk were true (which it's not), then rolling over like this shows them to be politically spineless and worthless in terms of “caring about this community” or even just believing in the content they produce. If the core statement is false (and they're removing content to play nice when they don't need to), it's an even worse reflection.

I just wish SG would either stand up for their members and content, or have the balls to say “you know what, we're exploitative pornographers in this for the money, and nothing more.”

When Germany came after BME for “endangering the youth” and demanded that I make changes to the site to comply with German law, my response was to simply not visit Germany again (and I'm a German citizen). When the US started to pressure us, we moved all of our servers and presence out of the country and backed off on plans to live in the US. No changes were ever made to the site, and no images were ever removed — if anything, the pressure made me push those areas even more. BME and I had this response because we believe in the content, we believe we are doing the right thing, and we're not going to be strong armed into violating what we believe in. Rachel and I have blown a lot of money and time in order to keep this site running the way we believe is ethical, and when that's been in conflict with the law, rather than change the site and violate our ethics, we've fought those laws both with legal action and by uprooting the site and our lives to protect BME.

If SG wants to play a game of being socially responsible, I call on them to immediately repost all photo sets that have been taken down. As a multi-million dollar high cashflow site with a large and generally politically aware member base, they could easily fight any prosecution that came their way. I urge them to have the courage to stand up for what their members and models — if not the SG management — believe in.

Update: First of all, let me be clear that statements as to how SG treats its girls are from former employees. Listen to both “sides” and make up your own mind. I have no formal comment on any of that.

Let me clarify my point on payment as well, because some disagree with me that SG does or doesn't pay its models well enough. My feeling is that SG makes money as a community site that has been marketted as “politically progressive” or even “feminist” porn, and that with a claimed 50% female memberbase, many of those members are joining because they believe in that. Because of that, I feel that the models are owed more than just $300 gross pay for complete rights to their shoots; perhaps a profit sharing model based on views or some other form of royalty which shares the profits.

But my big problem is with the handling of the FBI issues. After this post was written, SG clarified that they'd taken down the content because the FBI wanted to know about it due to a secondary case between SG (via the FBI) and a competitor over alleged hacking. So basically they removed their content to “look better” in court, not because they were threatened — putting on the public record that they feel their content may be legally obscene (which I dispute) and that they're ashamed to let it be seen in court. This is not a good move.

I've told them to please repost the material along with a pledge to defend it should it ever come to that.

A number of fish hooked yesterday, but none caught — “that's why they call it fishing, not catching”, right? There were bites from a few marlin and an insane eight-plus foot sailfish (that's it in the last photo but I wasn't quick enough to get anything but a splash). We went swimming as well, but the best part of the boat trip for me though was getting to see flying fish for the first time here… It's pretty neat; they sort of hop out of the water, skip along the surface for a while, and then catch air and fly maybe a hundred feet. The ones I saw were probably about the size of a big sparrow.

BMEshop and I are having a BME t-shirt design contest to drum up a few new designs (we are looking for multipler shirts, so there may be multiple winners). Winners receive:

To enter, email your design to glider@zentastic.com.

You can do original designs (preferred), or you can base your work on existing logos or your own variations of them (like has been done for various event shirts), or you can do slogan shirts, or anything else you think would work well on BMEshop. High resolution images if possible please (300DPI is ideal).

Please pass this on to friends and tattoo artists that may not see this. You don't have to be a current BME member to enter.