I love my grinder!

At this point I'm really sold on using my coffee grinder to make fresh spice mixes… The flavor of sauces and pastes you can generate is so much richer (but without being overpowering) than you can get from the same combination of pre-powdered spices.

Today my mix was half cascabel and half guajillo peppers in a sesame seed and almond butter (all fresh ground from whole seeds and nuts) with a little salt and brown sugar — a further experiment in the hot and sweet sauces I've been playing with lately. It's on top of zucchini, garbanzo beans, fresh chiles, yellow peppers, and sliced broccoli stalk, fried in sesame oil, fresh lime, and fresh garlic for about five minutes. I ate it with a whole wheat bagel. Also, I had some chickpeas left over, so I made a little side salad with the spice mix, half a lime, and a touch of sesame oil. On the chickpea salad it maintained a lot of its sweet nutty taste that got lost in the stirfry. 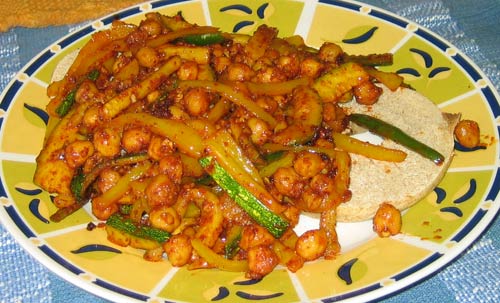 When I write these entries people invariably send me very nice messages asking for exact recipes, or even flattering me with the suggestion of putting together a cookbook. Honestly though, everything I post on cooking is really simple. I have no real knowledge on the subject and certainly no training — I just do it because I enjoy it, and you can do the same. Cooking good food is really, really easy. Anyone can do it! Seriously, once you've tried a few times, you'll see how simple this stuff is and how silly it would be to post in-depth recipes of what I eat.

Scary stuff happening in New Orleans… shops being looted, cops being killed in the street, 80% of the city under water with bodies floating in the flooded ruins… I haven't heard from Matt (who stayed in the city) but as far as I know he lives in an unflooded region of the city. Elayne Angel and Buck are safely in Houston, and purrtykitty4m is evacuated as well but there are a lot of members that are currently missing. If you know where people are, if they are safe, or if they're not, please post anything you know in the attached forum so people don't have to worry.

Update: Matt Gone is OK (but “living in Hell, it's a nightmare”), Agent_Blue is OK, CrystChilde and Shadowgirl01 are OK, Smurf is OK (at Burning Man), Mental Bondage and Nolagurl are OK (evacuated to Texas), AnjelicInsanity is OK. 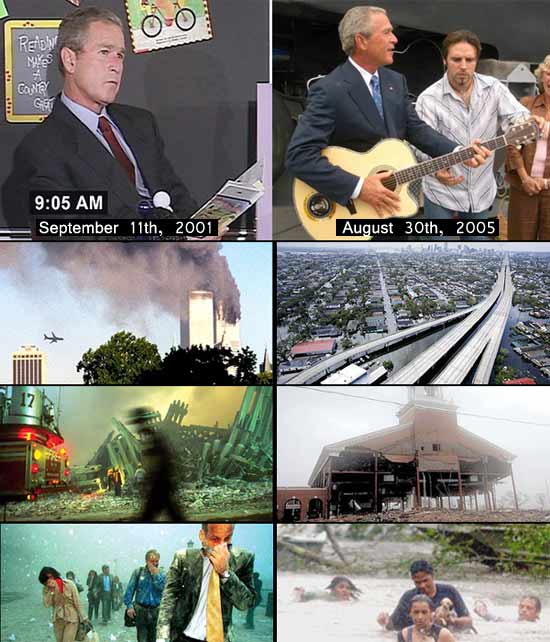 As you know if you read this page regularly, Rachel and I own a beach subdivision out on the West Coast of the Baja (about a 45 minute drive from here in La Paz) that a few IAM members and friends have lots on as well. They're putting in a mega marina about a mile or two up the beach, so I imagine it's going to turn out to be a killer investment, but that's not really my department.

Anyway, we went out there today (the first time I've seen it personally) and I took a bunch of photos:

If you're interested in a lot (1/2 acre beachfront lots in Baja California Sur, both right on the beach and set back), Rachel is who you have to talk to… It's a nice place to drop out at, and a solid place to stash and build some assets if you're thinking that way as well. Assuming you're not an IAM member, you can drop her a line at rachel@bmezine.com.

Have I mentioned that I live in Mexico? Well, if you ever need some clip art of a dead horse, here's a photo I took earlier (click for hi-res). Feel free to do whatever you want with it. Oh, and click here if you need a closeup of the head… ya sicko… 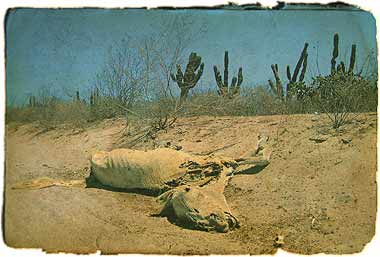 Before you deride me for taking this photo, let me tell you that Jay took photos of himself beating it. Beating a dead horse that is.

I got this article sent to me re:pierced eyeglasses that I thought was pretty funny. Is it really asking that much that writers at least, say, type basic terms like Anatometal into google? Talk about some terrible writing and researching:


The Ultimate Rimless?
Body modifications like ear piercing, tongue piercing, and lip piercing may be the craze today, but the latest and arguably most far out piercing is…eyewear. A “barbell” made of anatometal (an implant grade metal of stainless steel or titanium) is concealed behind the skin and attached to aluminum nasal mounts called brackets. The drilled lenses are then screwed in place. As James Sooy states, “They feel exactly like a regular pair of glasses. Actually, I put the nose pads on to keep them from swinging around, so all the pressure is placed there just like any other pair of glasses. Since they have no frame on the side (editor’s note: no temples), I can wear them while I sleep and still roll onto my side.” Now that’s innovation!