OK, Blair and Amanda and Saira were just here and agreed to go for a “test” swim on Sunday at 3 PM, assuming there's no insane weather or anything. Anyone who's brave enough to join us (which also includes Roo and others), let us know! We also need people for support/driving please! I figure that if I can swim in icey streams and glacial runoff, there's no reason why this should be an issue at all… right?

Oh yeah, and I had fun doodling this while watching the Daily Show. 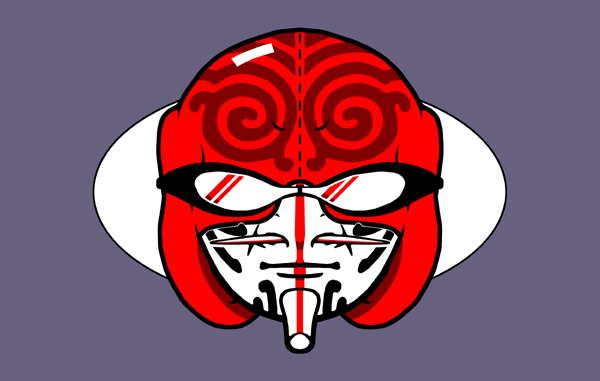 Read the entry after for context

Trembling in Tweed (left, New Year's 2002 I think) versus Shivering at Sunnyside (right, the potential shirt for the New Year's 2007 Polar Bear Swim at Sunnyside Beach in Toronto). By the way Roo and I are going to test the waters either this week or next if anyone wants to join us for a “warmup” shock swim. 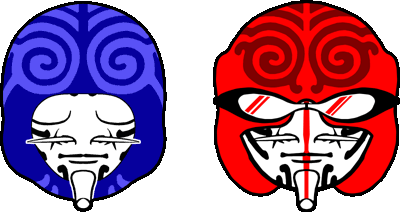 It's supposed to look like a swimming cap and googles if you're wondering about my outsider art.

I am fire, I feel no cold

So as I mentioned, when I was at the beach yesterday I got it into my head that I'd really like to go swimming. How cold can it be? My brother and I used to go swimming in the stream behind our barn as soon as the ice broke. Anyway, Phil liked the idea too, as did Roo, so we've got at least half of BME staff willing to go for it… Phil's proposed that we make it an actual IAM/BME event, and take part in this year's Toronto Polar Bear Club charity swim on New Year's Day 2007 (2PM, don't worry) for Habitat for Humanity Toronto.

If we can get at least a dozen people there, I'll print up a free event shirt (I have a design based on the classic and überrare Trembling In Tweed shirt) for anyone that does it and raises at least $50 in sponsorships. Coming up for Badur's party? Here's the perfect thing to do the day after, and a great fun way to start 2007.

Comments in Phil's forum (Are you brave?)
Comments (0)

Two heads are better than one?

Nefarious and I were talking about two headed animals, and how they form, and how different abnormalities affect them… After breakfast we decided to check out YouTube to see if we could find any videos of them. For starters here's a two headed snake:

Two headed turtles are pretty common too… I've seen both them and the snakes in person. Two headed mammals tend not to be as survivable as two headed reptiles and ambibions, but we found a few two headed cats as well: This two headed goat is pretty interesting as well: I didn't want to freak her out with deformed humans. I doubt it would, but better safe than sorry so in the human realm, we just checked out a three-armed baby. It looks like the third arm is at least partially controllable, rather than just a lump of flesh like most extra limbs are. Well, I hope I didn't crash anyone's browser by dumping so much flash in this entry!
Comments (0)

A fed coyote is a dead coyote

So my doctor's office finally called me today and told me that they wouldn't be able to refer me for a CT or PET scan without me seeing a specialist first to get their opinion on whether a scan was needed… which is bullshit because if the surgeon wants an MRI, and an MRI is not available, clearly he is going to want another scan! I asked them to please reconsider — since seeing a specialist and having them get me a scan will take just as long as simply waiting for my doctor to return — all they had to do was look at my file and fax a single piece of paper… a single piece of paper!

Anyway, it's quite frustrating.

Other than that, my trainer got caught up with other things today so that was canceled. I was going to go to the gym anyway and do cardio or something, but I decided that was going to be boring, so I parked at the top of High Park (and Bloor; where BMEfest was held this year) and walked down into the western ravine next to Grenadier Park. There are a crazy amount of squirels… It got me thinking about how if we manage to wipe out humanity with superinfluenza or bird flu or something, it would be pretty easy to live off squirrels. I figure I could catch, kill, clean, and prepare dozens a day if I had to.

I ran into a badger as well, sitting at the side of the path. He was moving around pretty slowly, and acting a little dazedly strange, so I think he was injured or sick. A group of older Chinese women and men were fishing in the pond. I'm not sure if it's really safe to eat. Lots of ducks, geese, and swans as well, and eventually I crossed the highway and ended up on the lake. I really want to go swimming if anyone is brave enough. It's about eight degrees, so while it would be cold, if you picked a slightly windy day (for windchill), the water would, in relative terms, appear warm. I just don't know if I know anyone brave-slash-crazy enough to go with me (message me or email me if you think you are).

I took some pictures with my malfunctioning camera along the walk:

I continued down along the beach to where the Lakeshore merges with the Gardiner (the bridge photo is underneath that fancy big white bridge). The strange high hobo scupture is sitting on the beach along that walk, surrounded by a number of other similar structures. I like the idea that there are pieces of art randomly situated throughout this world, and the only way you get to experience them is meandering exploration. Anyway, then I walked back… I guess that's a about a 10 km “hike” — not that I think you can really call it a hike if it's in the city?

Oh and in crazy project land, I think I should build a pulsejet powered mini speedboat. I don't know if I can afford to build the snowrail right now, and I think I could build the boat for very little… That said, part of me thinks it's insane because pulsejets run so hot that if they hit cold water their structure could be seriously compromised from the shock. So maybe I'll build a mini pulsejet and spray it with a hose from a distance first.