It's only play piercing (ie. temporary), but I thought this “bikini corset” that Joe just did was pretty cool (brought back memories of Steve and Jesse's SintheteX clothing held on by flesh hooks). More pix on Joe's page as well: 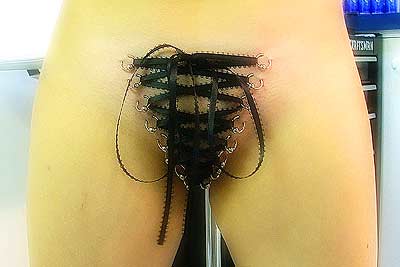 As you know I got tattooed yesterday — we rehit every line on my face a second time to get it perfect. Even though I did what I could to prepare for it, I think it hurt more than any tattoo I've ever had (maybe Matt freaked me out by telling me how he went into shock when he had his head done) — I was literally shaking from it, although I was able to keep my head still.

It was pretty weird since it's never happened to me before. I guess I've just been so exhausted lately that it took a harder toll than usual. I have so much more work to do than I can possibly fit into a normal day, even for me, and I just feel like I'm falling farther and farther behind, and I have so many started (neccessary) but unfinished contracts. I'm not complaining — to be real clear I chose what I do for a living, I love doing it, and I don't think I'd trade jobs with anyone — but I'm just so wiped out all the time. When you're always working, it doesn't really matter how successful you are, because you don't get to enjoy that success or even spend time with your friends and loved ones.

The photos above are literally the morning after (posted to submit to BME). It's going to look patchy like this for the next week still… At least now I can start to grow my hair again. I know my hair was pretty damn scraggly looking, but I really miss having long hair and will start growing it again now. That said, every time I've cut my hair I've wanted to regrow it — I just don't like the way the intermediate period looks so I tend to get frustrated and abort the mission.

Finally, I was watching Bush's speech in Missouri, I think the first one he gave after the DNC was finished. He was talking about how thanks to him the economy is the best it's been in twenty years, all the tax cuts he's given to the middle class, how he's cut the deficit, about how “America and the World are safer” thanks to the Iraq war, and the occasional quip about 9/11. Almost all of it was huge and obvious lies. Watching this as someone who's relatively well informed is highly disturbing because it makes you realize that the people voting for Bush are almost exclusively running blind. His lies are so obvious if you're even vaugely well-informed that to vote for him you'd either have to be profitting from it (ie. you're a multi-millionaire), or a fucking moron that believes anything he says as the Word of God.

I really hope Americans are intelligent and well-informed people and have the sense to eliminate him.

Am I hoping too much?

Anyway, I've got to go process a few thousand images, edit and render some videos, and get a totally new type of content management system written, to say nothing of the non-BME work I've got scheduled for [last month]… Lesson to all you entrepreneurs out there: if you're currently running a one-person company (or are the sole technical end of a small company), even if you don't think at the time it will ever grow large enough to require it, build everything you do with a team in mind. Designing single person projects by definition as single person could come back to haunt you if your projects become more successful (or simply larger) than you anticipated at the time.

First, for those of you who didn't get to hear the live profanity at the DNC last night, here's a short clip of Don “what the fuck are you guys doing up there” Mischer as he swore at the prop guys when the balloons failed to fall as he desired. That said, I thought that Kerry put on a hell of a speech, and Max Cleland's introduction for him was very strong as well. It must be driving Bush insane — whether you agree with his “side” or not, the fact is that Bush has really been a bit of a loser his whole life, and they simply can't produce a similar “biography”.

Anyway, I'm getting a little tattooing done before I get to work today (just a final touch up so I can grow my hair again). I like to eat healthy before getting tattooed (so it hurts less, ha), so I've got a giant pan of spaghetti sauce simmering on the stove. Not that I mind cooking, but it really bothers me that if I go to the grocery store to get sauce, it's extremely difficult to source one that doesn't have “high fructose corn syrup” as the first ingredient after tomatoes.

Well, after a lot of fighting with the server, an experience update is in place. Thanks as always to the hard working review team, and all the authors. If you think your experience should have been in this update, but it isn't, and you haven't been rejected, drop me a line with the title of your story so I can see. Because of the mail problems I had to manually resubmit everything, and some of the ones with really generic titles like “My piercing” may have been lost.

I don't think the cover model is on IAM yet, but I wanted to share the email he sent when he submitted the photo:


This is my first tat, and the start of my decision to become an ongoing sketch book for my son. He drew me a picture of the two of us holding hands, and when I saw how he portrayed himself (his first self-portrait) I knew it had to be permanently added to my body. He then drew me the sun and added his signature... and I have what every tat enthusiast I've run into calls the coolest design they have seen. I am planning on adding at least one design per year, and when he turns 10 I plan to start on one side of my back and transition across until he hits 18.

Anyway, I really like kid-drawing tattoos. Maybe I'll get one in the future, if Nefarious turns out to enjoy drawing. If not, maybe I'll draw a tattoo for her (when she's a lot older though). In any case, enjoy the update… I'm off again, first to create today's new members and then back to the mines to keep chipping away for this vein of gold I sense must be somewhere ahead of me. Hopefully…


They say that Florida is America's wang, but wow do the politicians down there have balls that suit a five hundred mile long weiner. When asked to produce records of the September 2002 elections (after being accused of fraud), they admitted they'd said they'd had a “computer malfunction” and had lost many of their electronic voting records. Thank God Jeb Bush passed some new laws blocking most future recounts, right?


For the last week at least they haven't closed the service door on the elevators. Last week the security system failed and many of the exterior doors were broken. Given how lax they are here, I'm thinking I should just bust down the roof door and have the next BME BBQ up there instead. This building has a great view, but terrible management.


I haven't been able to drive it much this summer because it's developed an overheating problem (700 HP will do that) and I haven't had time to deal with it. Anyway, it's off now to get that fixed, then a little more work, and I'll at least be able to drive it for a month and change before winter comes (if not more). I really miss driving it a lot.