I'm far from the first person to point this out, but I really find those video professor (below left) ads on TV somewhat disconcerting due to the similarity to Canada's NDP leader Jack Layton (below right)… If he ever got elected and needed Saddam-style doubles, he already knows who to hire. 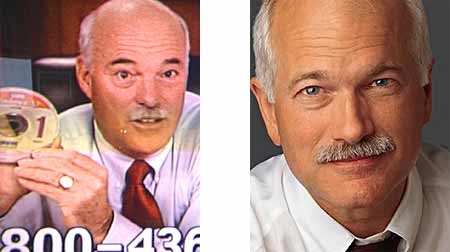 So I was eating some wasabi coated peas and it had one of those little freshness packs inside it. In red letters it said DO NOT MICROWAVE. I figured, hey, what's the worst that can happen? Toxic fumes that kill the nazi sex cult next door?

So I microwaved it.

First it expanded like a little balloon and I didn't really expect much more to happen. But then all of a sudden sparks started shooting out of it and it actually exploded (I got lucky with that middle photo). Finally it burst into flames and started to smell pretty bad so I threw it in some water.

Revenge of the Nerds

I just finished sending thirty or so people interview questions about their “geek” tattoos (gaming logos, computer hardware and software tattoos, as well as engineering and math tattoos). So expect that at some point in the future. If you have one of these tattoos but didn't get an email from me and would like to help, drop me a line at media at bmezine.com and I'll shoot some questions out your way (include a picture of your tattoo with the first email please).

Other than that, a gift from the good folks at Google:

Death and Space and Fraud

I'm repeating this story pretty much verbatim from last night's Daily Show. As I wrote at the time, last week about 5,700 more US soldiers were recalled from their civilian lives (ie. drafted) and forced to go to Iraq to risk their lives to make defense and oil contractors wealthy. Among them were “two trumpeters, one trombonist, four clarinetists, three saxophone players, an electric bass player and a euphonium player“. The below exchange took place between Rep. Vic Snyder (D-AR) and Gen. Richard Cody (Army Chief of Staff).

Unfortunately, as you know, our bands do an awful lot of our burial services. Our bands are stressed across the nation.

As Jon Stewart put it, when you start responding to high troop casualties (now approaching 10,000 US casualties in Iraq and over 1,000 dead) with “let's hire more bands to play at the funerals”, it might be a good time to start “thinking outside the coffin”. (Oh, and if you don't know what a euphonium is, it's sort of like a baritone with an extra valve, or a small tuba if you don't know what a baritone is either.)

There's a related story that I wanted to mention as well, about the space hotels that Budget Suites of America is putting up in the immediate future (more). This story really helps you understand why America is potentially going to collapse (and why the “official” space station has a cost of something like $50 billion)… One of the problems he's been having is that costs are too high. Now, maybe you're saying “hey, it's not going to be cheap to build a space hotel”, and that's true of course, but…

Because space and advanced aerospace work in the US is almost exclusively government contracts, costs are exceptionally high… after all, everyone knows you can screw the government. We all know about the $1,000 toilet seats the military buys. Anyway, to give a few examples, he had to buy a valve for the life support systems. US companies wanted to charge him $1,000,000 dollars, whereas European companies were happy to sell it for $5,000. His entire life support system was going to cost $100 million in the US, so he bought it from Germany for just over $1 million.

When US companies hose the government for hundreds of times the legitimate cost, they are screwing over the people of America. They do it when they conspire to have them die in needless wars, and they do it doubly so when they siphon off America's future. To be very clear — America and Europe are already heading toward a cataclysmic economic showdown. France and Germany are making military alliances with Russia and China, and if America doesn't cut this rot out of its government, it will be the slum of the 21st century. The nation that rules space rules the future of mankind.

There is still time for America to climb back on top, but the clock is ticking.

PS. Anyone want to split the cost of a cruise missile?

First I want to mention that US courts just ruled that no warrant is required for anyone to monitor your email (more), or anything else that passes over the internet. This isn't just about government monitoring, this includes private monitoring, as long as the information being monitored is temporarily “stored” on a computer that the person doing the monitoring owns. Since nearly every TOS and privacy policy has a “we can change this any time we want for any reason” clause, take seriously what you store on other people's computers. Here's some info on what I store about you on IAM.

A few days ago I mentioned that the US was moving seven of its carrier fleets off the Chinese coast (the largest such maneuver in US naval history) and would be staging war games with the Taiwanese. That situation has just escalated with China staging its own massive war games to rehearse an invasion of Taiwan and defense against US forces (more). While it is highly unlikely that China can currently win such a confrontation, it is a guarantee that it will make a ton of money for the defense contractors and kill a lot of innocent people in the process if it happens…

Catching up on two more stories, the US pilot that “willfully” bombed Canadian troops was given only a slap on the wrist: a fine of $1,400 per dead Canadian (more). In addition, US courts have blocked a lawsuit by Sibel Edmonds, saying it would be damaging to national security (more). For those of you who didn't read the interview, she's the translator accusing the FBI of corruption, sabotage, and intimidation, and saying that they've been infiltrated by criminal groups, foreign intelligence agencies, and corporate spies. And her talking about it is the threat to national security?

Africa continues to be an escalating mess as well. Tunisia, backed by the US, has its own torture prisons for Islamists (more), and Equatorial Guinea, another US-backed oil nation with a rich-poor ruling structure very close to Saudi Arabia's just executed a dozen rebels and tortured anyone they thought might be even related to them (more) because of their attempts to extract the country from the grip of the oil companies. In Sudan of course the killing continues despite the cease-fire (more)… Why am I telling you this? Because there are more people in Africa dying of AIDS than live in all of Canada (more), the countries are only a step away from anarchy, and without hope for the future, they are the perfect breeding ground for terrororists (more), to say nothing of the humanitarian issues. Too bad Bush doesn't want to allow condoms in Africa (more) for “religious” reasons.

Finally, since people always ask me if Americans can apply for refugee status in Canada, here's the case to watch. Jeremy Hinzman, a former US soldier who faces the death penalty in America for desertion (more, google) had his case reviewed yesterday and it is being taken seriously. This only applies to soldiers right now, both because of the illegal nature of the Iraq war, and due to the fact that it's a death penalty violation.