State of the Union

For those of you that missed it, here's a few of the main points:

No, I'm not buying one! But I do have one rented so I'm walking out the door to do that now. Lots of friends have offered to help me move tomorrow and the next day, but I figure it's safe to have a vehicle of my own as well. The Red 93 Cherokee that I mentioned that a friend is selling me is just going through emissions testing right now, plus my Porsche can go on the road when the weather is a little safer for it (I suppose I'm lucky a buyer was never found).

At my new place I've got all the utilities transferred, and have just a few errands left to run before tomorrow. Other than that, I foresee a great deal of heavy lifting in my immediate future… I have far too many not enough books in boxes to move. I have to pick up a little furniture, house supplies, and all that as well, which brings me to a question:

Where can I get bean bag chairs in Toronto?

The place I'm moving into has a finished carpetted basement, so I was going to put my big TV down there, some bean bag chairs, and have a traditional rec room sort of thing… And of course Nefarious's toys as well. But yeah, if anyone has an answer that's more definitive and informed than “why don't you go look at Walmart”, I'd love an answer…

As I'd guessed, it's looking like about 30% – 45% of the tattoo is going to stay in… When my body has completely refreshed the skin above it, I'm going to have it hit again (and probably a third time after that to get it totally solid). People have asked me if it's helping, and you know, it's actually really great as a form of selbstpsychemodifikation. Because your brain automatically reads any text it's exposed to (thus the power of billboards), the words “stay calm” get superimposed on my daily life almost constantly — and it really does work.

If I think about this subject too much it would be better off as an article or ModBlog post (which I have a whack of posts for and will update later tonight), but seeing the effects that this tattoo has on me, I have to wonder about the subtle ways in which a person who wears “Born to Lose”, “Unlucky in Love”, or even “Hate” is affected by the words they see over and over attached to their bodies.

Anyway, I'm out the door now!

Blowing up planes is easy!

Reading this entry is a violation of the US PATRIOT ACT. If you are a US citizen, please do not read any farther.

Having recently traveled from Mexico, through the US, and on to Canada with a great deal of luggage, has given me a few new insights and experimental observations about smuggling and aircraft hijacking (not that I foresee either act in my future). I'd been in Mexico for a year, and Phil had a significant amount of stuff as well — we were traveling with several bikes, five computers, over a dozen harddrives and enclosures, a guitar, and lots of cables, clothes, and other items. Here's a photo of Phil taken as we finished our trip in the Toronto airport: 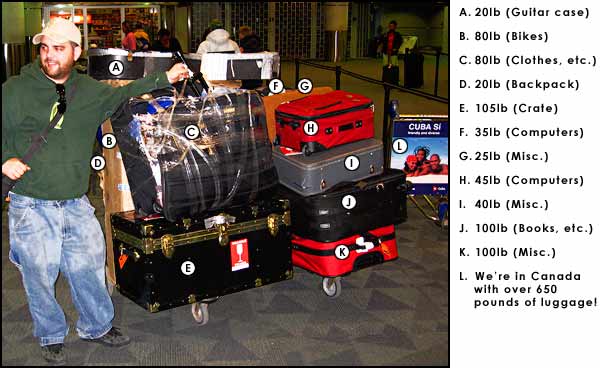 As you can see, it's a very large pile! And yes, the one bag exploded due to how heavily it was packed — two of the suitcases actually split open on the trip, but luckily nothing was lost.

Anyway, the journey began in Mexico in San Jose del Cabo. They made us shift some things around in our luggage and charged a hefty fee for it being overweight, but there was no search of any meaning. One of the suitcases contained a mid-tower desktop PC case, which didn't only contain a computer — I'd stuffed it with power supplies, cables, and anything else that would fit to save space. So it was outrageously heavy, and if x-rayed, would look nothing like a computer. Searching was limited to a young Mexican kid opening the bag, looking at the top layer of clothes, and closing it again.

My first carry-on luggage bag contained two 17″ laptops each with dual hard drives stacked on top of each other, along with power supplies, a digital camera, and an MP3 player. They were not removed to be searched or x-rayed separately (meaning they could have been just about anything). Nor was my NAS computer (which contains four large hard drives, a power supply, and the electronics all in a tightly packed case), the contents of my second carry-on, searched or examined.

So in Mexico I could have easily brought a bomb into luggage, or a gun or other weaponry into carry on. OK, but it's Mexico, right? But when we transferred flights in Chicago, while I did have to take my two laptops out, I didn't have to take out the NAS (which could easily contain anything) or any of the steel-cased harddrive enclosures… So even in Chicago I could have brought a gun onto the flight with ease. Just as disturbingly, there was no real search of the checked baggage, although we did discover that the DHS had chosen a single bag to search: 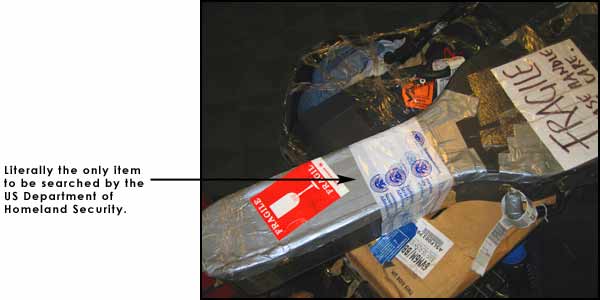 Seriously, WTF? 650 pounds of pretty suspicious luggage, and all they look at is the guitar case, the least threatening of everything we checked? I have three possible explanations for this:

Sadly, if I had to guess it's the last option. Pure and simply laziness and incompetence. What's the law? “Never attribute to malice what can be attributed to stupidity?” It was a little disturbing to have confirmed my belief that it would be very easy to take out a plane, but then it's also refreshing to look at that fact and realize that because it hasn't happened, that “terrorists” must consider hijacking a plane an absolute final option that they don't particularly want to do.

Oh, and Canadian customs didn't search me either; they didn't even look at what Phil and I were traveling with. Not that there's really anything particularly problematic that people would bring back from Mexico to Canada, so I can't imagine there's really much worth searching for… Maybe cheap cigarettes?

PS. I don't believe there is really a reasonable solution to what I've described about.

Amusingly, there are currently no Canadian or American dollars in my wallet, and those are the only currencies that you can spend at every store in Canada (although these days most will take American only at face value due to its weakness). I don't really know why it makes me happy — maybe it's a “virtual travel” thing, or maybe it's fantasies of being a supersecret-agent — but my wallet contains quite a few different currencies right now, all with specific memories attached: 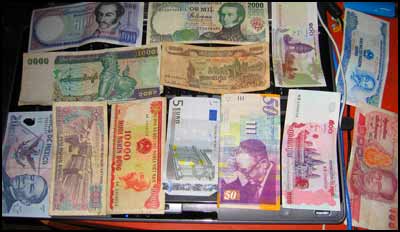 CLICK TO ZOOM IN
There are a lot of places I've been where I regret not having brought back currency (Namibia and South Africa, Argentina, the UK, the Carribbean). I think maybe I'm like a Bladerunner replicant or something — because of my poor memory and thus the illusion of an artificially limited lifespan (because I have only a few years of memories, rather than a lifetime's), I may subconsciously cling to the symbols of memory, to the icons that jar and generate them?