Sorry I didn't post yesterday. After some work in the morning I spent the daytime at with a friend at a palliative unit, and then I had my own doctor stuff to do in the evening. Today was my orientation for the surgery where they told me all the where to be and when and what to bring type stuff and they took a little blood, and then on Monday morning they pull out the drills. I've got ModBlog pre-loaded until Tuesday, and I should be fine to post then anyway.


“We don't want to forget to tell you that you've been breathing poison gas for the last ten minutes. (Coughs). It's a very poisonous gas, and in just a few moments you will pass out and die. Thanks for your trust in us.”

I'm posting that Grobschitt video in part because last night Jon, Saira, and I were talking about how it's very difficult for people who haven't experienced racism personally to understand how even light jokes can be really hurtful… In my case, I still feel very uncomfortable when I hear “krautrock” — a term that boggles my mind that it was accepted, because calling German Progressive Rock “krautrock” is like calling rap “niggertalk”. It's hurtful and demeaning, even it seems to have been by and large accepted.

Even though I'm white living in a largely all white society, I know what it's like to get bullied and beaten up daily while being called “kraut” due to my accent. I can't imagine how much it would have sucked if it was about my skin color as well… I think a lot of the time people assume that racist jokes told in good humor don't hurt, and on one level they shouldn't, but it's sort of like telling dead baby jokes to someone who lost a child. They're never going to appreciate it… It's funny because with terms that people don't think about like “gypped” or “jewed” or “krautrock”, it's surprisingly hard to convince people you're not being oversensitive.

I think I'm rambling, so feel free (or not) to enjoy some more krautrock Grobschnitt.

“Would you like to sit on your bum, on the surface of the sun?” PS. If you appreciate stage theatrics, watch the second clip, and the last third of the first.
Comments (0)

I've written about it a bit here before, but since about six months after I left Mexico my weight started to drop. I think I was about 225 pounds or so during BMEfest 2006 for example, and by the time I started going to the gym I'd dropped to 195 pounds because of difficulty eating enough. I think the (not totally accurate) measurements at the time put me at 26% body fat which is just inside “obese”. Now I'm at just under 13% (at 175 pounds), which puts me just inside “underweight”. I'm not so happy with either (I feel very uncomfortable below 200 pounds in general), although I'm totally thrilled with feeling healthier and fitter.

Jon (who does most of the cooking here) has done wonders keeping my intake as high and worthwhile/healthy as possible, and hopefully when all this tumor junk is dealt with I'll have my appetite back. Other than that, the nerves are starting to grow back into the damaged tissue from the second magnetic implant removal procedure, so my left ring finger is ubersensitive! Oh, and I'm not peeing blood any more, yay, and just finished getting my kidneys ultrasounded.

More to that story, but I'm off to pick someone [small] up from school.

OH, and if you haven't already recommended a piercer, check out the entry about that a few entries down from this one. I really appreciate all the recommendations (and volunteering) so far and this is going to be a very difficult call.

A warning too late?

On one level I feel a little bad linking to a ripped off video that I really think should be profitable for its creator, but at the same time I think it's very important that everyone watch WHY WE FIGHT, which I just noticed is on Suegle Video… Click the poster to check it out. 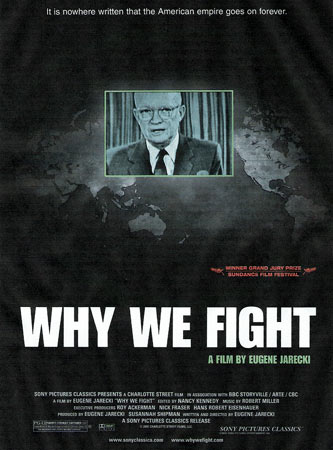 What do you think?

The lack of comment forum means I'm not about to do it again, but Saira reminded me about the time I shaved my eyebrows when she saw that Phil had done the same daring move recently… So I found this old picture of when I did it and I actually think it looks pretty neat. 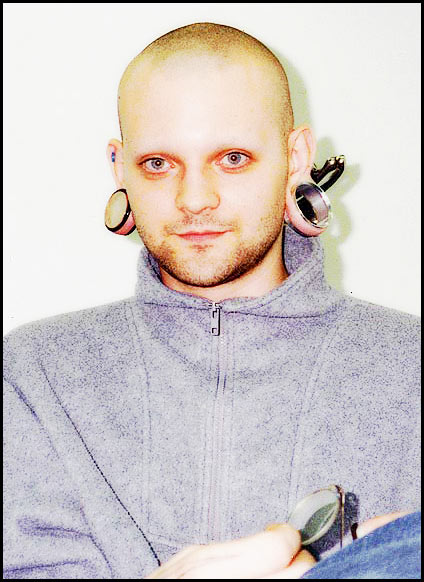 No happy ending though…

…but it was my fault because I couldn't get it up.

So I've been feeling sick for a little while, but this morning I woke up peeing blood. Not like dark urine from dehydration or vitamin overdoses, but full on almost pure blood. Now, I'm no stranger to blood pouring from those bits, but usually I've given some level of consent in the matter, and the pain is far more pleasant! I've also had UTIs in the distant past (which was my immediate assumption), but never one where I was actually peeing full on pure blood with virtually no urine.

Anyway, so I call up Phil, not because he's an expert on peeing blood (or is he?), but because he tends to know where clinics are and I really didn't feel like waiting for an appointment with my doctor or sitting at a hospital wasting their time, so I chugged as much water as I could (because I knew they'd want a sample), and met up with him and went to the health clinic that's in his building. They did a urinalysis on me. I tried to take a picture of it (the results, not the urine) with my cell phone but there's dust behind the lense and it basically doesn't work any more.

I guess that confirmed that I wasn't hallucinating. I got asked a bunch of lifestyle questions as normal, and had to show him that I don't have standard male valving (males have an extra valve in their urinary tract that women don't have, which normally makes them far more resiliant, but if you have a subincision that valve is separated). So I got fondled, and then had my first ever (that I can remember) prostate exam from a guy (everything's normal in that department). Not terribly exciting (and let me emphasize to guys — it's really not a big deal so don't skip those exams).

The good news is that there's virtually zero chance that it's related to swimming in the lake, which had been my first concern (e-coli can cause these types of infections). Tomorrow I have an ultrasound of my kidneys and surrounding region. I guess there's some slim possibility that the changes I'm made to my core anatomy over the past few months has shifted organs slightly and caused a “kink” somewhere in the system that could lead to chronic infections like this if it's not dealt with. That said, I think statistically it's probably a random occurance though.

So anyway, I'm on some broad spectrum antibiotic, my surgery is still scheduled for Monday, and I got to go to the doctor today, as well as tomorrow, Thursday, Friday, and Monday! Woowoo. I wish I went to school or something so I could use all those doctors notes.