Since I got a nice auto-related link via BoingBoing today, I thought I'd post a little car entry. I was thinking about how everyone makes fun of Americans for driving big SUVs like the Hummer, and, how like many cases of poking fun at Americans, much of the rest of the world is guilty as well. Flipping around the globe to Russia, here are a few of the SUVs currently on the streets of the former Soviet Union: 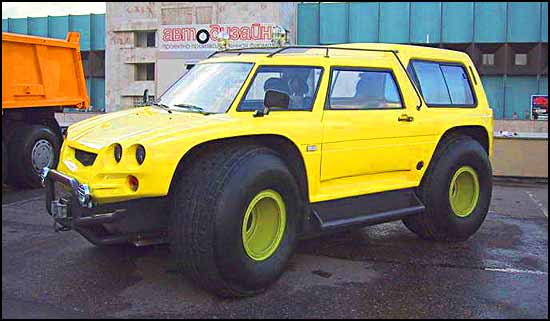 Sure, they're not quite the over-the-top CXT, but still…

At least there were piercings…

So last night I watched the incredibly cheap and not really very good zombie movie The Stink of Flesh. The plot is built around the question: what does a sex-addicted swinger couple do after a zombie apocalypse? In this case, the husband goes out looking for guys to screw his depraved wife… and the husband has a naked female zombie chained up in a shed as his plaything. It sounds more pornographic than it actually is. It's crazy cheap, shot on what looks like consumer camcorders, with minimal production and editing work, hardly any effort on makeup, and so on…

Unless you're a backyard zombie film fan, you should probably avoid it, but I mention it here because there were a decent number of pierced and tattooed folks in the movie (althogh somehow I highly doubt they're SAG members… more like friends and family of the director). Anyway, the first girl to get killed has stretched lobes and a variety of facial piercings, and the zombie girl has nipple rings, a rook, and more (as seen in an earlier flashback where she's seduced by the wife). 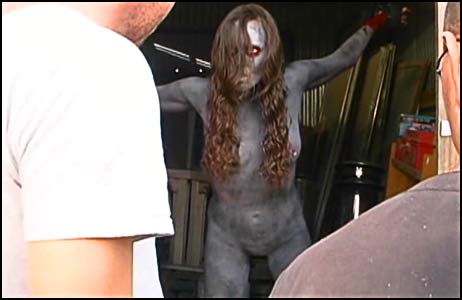 I'm probably being a little unfair in my review because I went into the movie unaware that it was a backyard project (I assumed it was at least a “B-movie”)… There are some better reviews up at Amazon and Rotten Tomatoes, and of course at the official site. Meh, complaining about production value in projects like this is lame. For what it is, it was fun, and made me want to go out and shoot a zombie movie myself. I don't know what it will be about, but it will also include naked zombies with nipple rings. Lots of them.

One of the things that's not cheaper here in Mexico than in America or Canada is electricity, at least if you use a lot of it (the more you use, the more you pay per kW — sort of like bulk buying with reverse pricing). However, we do have tons of sunlight. Anyway, I was reading an article press release from Pyron Solar about their new solar generator. It's a nice self-contained unit that spits out a sustained 6.5 kW and they're planning to bring it to market for as little as $13,000.

To put that into context, according to the article a 6.5 kW generator is enough to power five or six homes*… So, the cost of “free” electricity for the lifetime of this unit is $2,600 per home. Over the first five years of use you'll have spent the equivalent of $43 a month. Over ten years, you're spending $20 a month on your electricity use (and saving everyone money because of reduced infrastructure and pollution). All of those numbers are a fraction of what we're spending right now…

Sometimes I think that this hellish mess that the Bush-Cheney cabal has pushed us to is going to be a good thing, because as it collapses, it makes everyone painfully aware of the looming environmental issues, political and corporate corruption, and needless profit-driven wars… All it takes is ten percent of us pulling our heads out of our asses and doing the right thing and everything might just turn out fine.
* I'm not sure that I agree with their “six houses” number. A 6.5 kW solar array should generate something like 30 – 35 kWh daily. Given that the average house in the US consumes that much power, I'd say that a single array will power a single house. That said, current houses pretty much throw away electricity and can be made many times more efficient. So maybe “six houses” is true, but it's definitely misleading. Also, don't underestimate how much power the average appliance uses, even if you're not using it. For example, a VCR that's plugged in but not turned on consumes about six watts. That's not a lot, but if you multiply it out over a year, that's over 50 kWh, or what this solar array would need almost two days to generate!
Comments (0)

First of all, let me state that these photos are extremely explicit and you shouldn't click on them if you're not cool with that (or if others are looking over your shoulder). 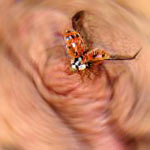 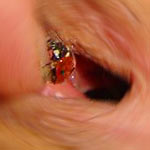 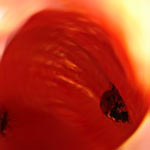 * I'm talking about non-violent insect play (ie. the feeling of bugs crawling all over you), not bug crushing fetishes, which are something quite different I think and play into quite separate fantasies.

Almost forgot to include a brief encounter story. We stayed at the Cabo Real Hotel (or something like that) last night — one of those big resort-like all-inclusive places where jocks and chubby retirees who prefer Mexico to Florida hang out and consume cheap margaritas made with low-grade drink mix. All-inclusive sounds nice at first, but you don't get a lot for $100 a night — our first room (we got moved) had no functioning toilet and the window looked out into the hallway!

In any case, as we're checking in to the hotel, some jock guy comes over to me and belts out his variant the old standard — “yo braw, that musta hella hurt!”

I tell him it didn't, and I'm just sort of staring at him and his buddy when he points at his nostril and I realize he has a really tiny pierced nose gem. He continues, “cause I cried like a motherfucker when they did this to me!”

“Yeah, I guess I'm just not as much into crying as you are,” I tell him.

I suppose he liked the answer because he mumbled something generally agreeable, laughed, and stumbled off with his beer.