Our home intranet here is a gigabit network (which allows us easy access to all the movies on the NAS and so on) on a Netgear GS108 switch, and then our actual Internet connection is via a four port combination DSL modem, router, and wireless system. What this means is that when I'm using the IAM.Live message notification client, I have to be plugged into the router since the switch is letting UDP packets out, but doesn't let me receive them correctly.

The problem is that the network has to be running at full speed (ie. 1000 mbps) for Phil to be able to use the BME image updating software (which runs off of a network mounted drive) and the DSL modem is only running at standard speed (ie. 100 mbps)… But I really like my little message tool and don't want to give it up! Anyway, here's my nutter solution: 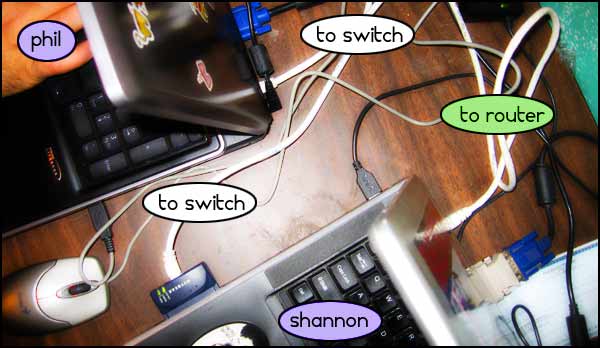 Thanks to a PC Card based gigabit ethernet, my laptop now has dual gigabit NICs, with one of them plugged into the router, and the other one plugged into the switch. Surprisingly it seems to work just fine — intranet traffic is running at full speed, and I'm connected to the net via the other port, so IAM.Live is working as well. I love it when stuff works just by plugging it in.

Oh, and if anyone has any last minute feature requests for the message notification tool, shoot me a message about it because I'm going to lock down the first version of the protocol over the next 36 hours. The prototype version (download link is a page or two back) is still fine to use, but I'll release the beta client, sourcecode, and protocol specs on Winter Solstice.

Anyone reading this a normal human being?

Today early morning I had purchased/signed up for your New BME FULL/HARD membership.

After login, I observed that many of the pictures/rituals of body modification/manipulation were disgusting and too extreme, raw, sensitive and brutal for any normal human beings' viewing. We both felt extremely hyper nauseatic and my wife even vomited after seeingsome of these pictures/rituals.

In view of the foregoing, I request you to accord 100% refund of the membership fees/charges on your record immediately and oblige. I also regret causing inconvinience, if any.

I've got a possible shirt about Germany banning BME off to Ryan. The amusing thing about this shirt is that it is illegal to wear it in Germany. The ban on BME is complete — legally, if there is any chance that a minor could even see the link, you can't mention BME! It's insanely stupid.

Anyway, if you want one, tell BMEshop. 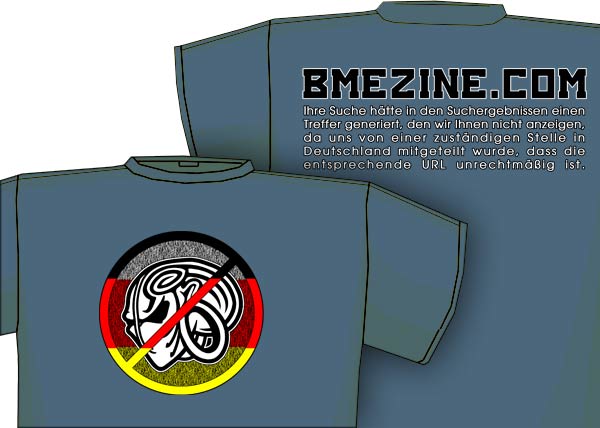 Anyone that takes a picture of themselves in Germany wearing this shirt, I'll send some free membership time to, and if anyone takes a decent picture wearing one in front of a German landmark, I'll do my best to make it a cover shot.

Here's what you get when you search for “bme” in Germany:

The note says that they have responded to a legal demand to remove three websites (ie. BME) from the search results. When you click through to the info site, here's what you get:

“A URL that otherwise would have appeared in response to your search, was not displayed because that URL was reported as illegal by a German regulatory body.”

This is a process that the German government started back in 1999 (translation). To make a long story short, it is the contention of the German government, I believe incorrectly so, that BME must entirely block underage viewers from seeing anything on the site, and they want ModBlog shut down.

BME is incredibly valuable for readers of all ages. If the German government wants to kid itself into thinking that people under the age of 18 don't need information on body modification, it's their hands that become bloody with the results of people who move forward without the opportunity to educate themselves — to say nothing of the political free speech issues. Not that Germany has ever been seen as a bastion of progressive politics.

BME is for everyone!

One of the things that always fascinates me about BME is that it's both ultra hardcore in what it covers and pulls no punches and censors nothing* — so you have the really extreme anthropological journalism that you find in BME/extreme and BME/HARD — and at the same time, I think BME does a really decent job covering the mainstream as well. But still, I'm always pleasantly surprised when media and individuals who are in theory totally “safe for school” choose to work with BME. Given the crap that's launched at BME from plainskins most days, it's very nice to see that when it matters, the right folks support our mission.

Anyway, a few days ago BME got featured on Mobuzz TV, a sort of vlog-based hip tween online station. You can click the picture below to see the geek tattoos feature they did (it starts about half way through the clip). If you speak Spanish, check out the same coverage in Spanish which has a different host, different narration, and different tattoos, and is a little funnier. 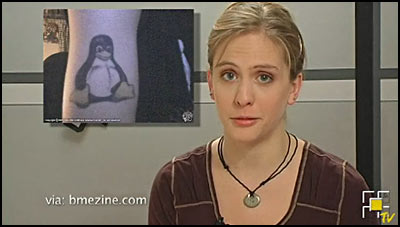 Just one more small step toward world domination, right?
* Maybe one day I'll curse this from my prison cell, but I believe that it is extremely important that complete coverage be done of this community, and that includes the extremes, and it certainly includes the sexual eccentricities.
Comments (0)