Thanks to secret agent Dana for this lurdo spy shot… I called the shop to ask them why they were using my logo and they didn't get that “we found it on the internet and just really liked it” doesn't cut it when you're claiming that it was designed by some dude named Ramprashad. They've promised to take it down immediately. If they don't I guess it's time to make some money in court. 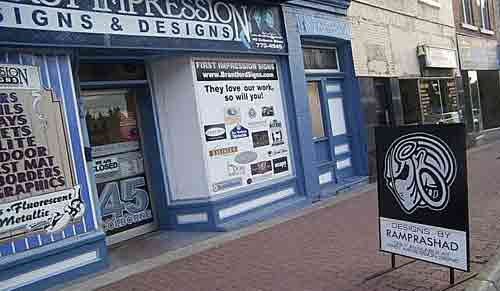 Why I don't work in customer service


To: BMEzine
From: Denise
Subject: suicide girls ads >I love your site but I must protest the new
>advertisment for tattooed and pierced girls.
>Did you see the shot of the simulated oral
>between the two women? I think it's a big sell
>out and I hope you'll rethink it. It really
>cheapens the art form of tattooing. Denise, thank you for contacting me about this. I had not closely looked at the advertising and I did not realize that the oral sex was only simulated. Like you, I am deeply offended when I find out the oral sex I've been watching isn't real.

I will be contacting the advertising agency who provided these placements to us and will emphasize to them that our members need to see clear and unambiguous tongue on clit action. Now that you mention it, the only thing that offends me more than simulated oral is temporary tattoos.

When I was eleven years old I read Mike Resnick's The Olympians in Isaac Asimovs Wonderful Worlds of Science Fiction #2. I may actually be remembering the wrong story, but it was a far future in which humans had contact with many alien races around the galaxy. Human athletes — the Olympians — traveled around the galaxy challenging each alien species to compete in its “native” game. Humans had great pride in, with gargantuan effort, consistently winning every event.

I realize it's an inevitable evolution as the US crumbles as a leading nation, but I really had hoped for them to clean up across the board, taking the majority of the gold medals. One of America's greatest gifts — and one they lose more and more every day — is the ability to inspire people around the world. It's not really an “us and them” sort of thing that I want to see — even if it's total hogwash, seeing good looking American athletes winning is like watching Superman… Like I said, even if it's all lies, somehow there's a little taste of “truth, justice, and the American way” winning over evil buried in there.

But in any case, the Olympics are a symbol of excellence just like America is a symbol of excellence (even if they're falling short right now). We all just need to figure out how to convert these symbols back from advertising slogans into reality. Of course, if we had half a brain we'd stop squawking this patriotic garbage and start worrying about the Shenzhou threat. And Shenzhou is a real threat.

Do you even know what it is?

Note: This is a link to an adult site. Don't click it if you're not cool with that. 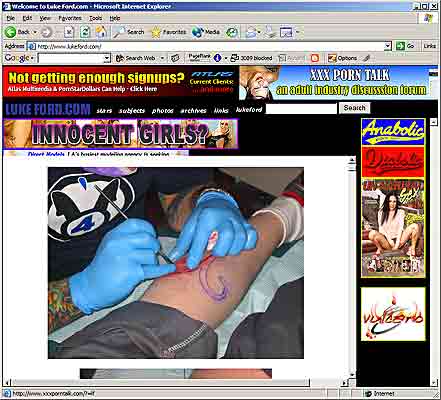 I just got the following email:

I was looking for some idea's to design my own tattoo and found some nice material on your site to inspire me.
There was one disappointed however: one tattoo was very cleverly displaying the NAZI-symbol and I had to look a couple of times to be sure.
I don't know if the designer did it intentionally or by accident, but it is there all the same.
Do you have some kind of policy?
To me it seems best to avoid that kind of statements, don't you agree?
I included the picture in smal size and painted the symbol in green to make you notice it too!

I hope you make the right choice.

Here was my reply:


Honestly, I think that you're probably making an assumption on this a little too quickly -- finding swastikas in Celtic designs is very easy when you're willing to look in negative space like that. I'd hate to start going on that sort of a witch hunt.

While I do not post really overt "white power" type tattoos, I'm also really loathed to politically censor the tattoo galleries. I'm just not sure if it's relevant for me to put politics *ahead* of the tattoos in this context especially when it's so vague.

What do you think? Did I make the right call in keeping the tattoo posted? Should I really remove every square celtic knot on the site because someone might imagine that there's a swastika in the middle?