Want to do a car pin-up shoot?

As some of you may have already seen on Allen's page, my new rocketship-straight-from-the-seventies Manta Montage (sort of like the “kid brother” to my old Manta Mirage) is sitting safely in his garage. There are a few more pictures of it below, but I'd like to get some real photos of it taken for various online gallery sites (as well as for Obscurephoto).

Anyway, not to sound like too much of a dirtbag, but if you're an attractive girl (and better yet, can pull off a seventies look) that's into the car, drop a line please! He's in Dallas by the way, as if you didn't already know that… Oh, and for people who are wondering, this car isn't quite as fast as my other one, which could do well over 200 mph; I'd put this roughly on par with my Porsche (or at least on par with Rachel's Porsche — mine had some work done).

Yes, you can start ranting about the international bourgeoisie now, but those cars were a series of trades and took far, far less money than you're probably guessing (never had them all at once), and was more of a big fuck you to the upper-class bastards who got traumatized every time they saw a freak step out of a car that was more elite than theirs.

Other than that, using our Mexican TiVo, I watched the new Britney Spears reality show. Holy crap, what a sad, pathetic, trainwreck of a show. I suppose it'll put the last nails in her coffin as we watch her slowly gain two hundred pounds and become a heavy drinker. I'm sure JT is glad he jumped that sinking ship.


I looked, and there before me was a pale horse! Its rider was named Death, and Hades was following close behind him. They were given power over a fourth of the earth to kill by sword, famine and plague, and by the wild beasts of the earth.

Of the various Mexican $4 DVDs I picked up, so far the only one I've enjoyed is the Paradise Virus. I wouldn't say that it's my favorite (made for TV) movie of all time or anything, but I like this type of story a la the quote above, and I'm a fan of (former Mr. Universe) Ralf Moeller and he does a great (if over-the-top corny, but he's a far better actor than Arnold) job at his role in this film, a huge free-diver that found God at 500 feet below the ocean and started a Carribbean cult.

Anyway, getting back to the point of this entry — attractive girls, write Allen!

But first ask yourself: Is George Bush a Sith Lord?

Some friends of mine got caught stumbled upon doing a BME/HARD public nudity shoot. If that family's bike ride had timed a half hour later, they would have stumbled upon her with far less clothes and a series of colored ropes strung from nipple and genital piercings to trees. Oops!

Thanks a lot La Poderosa

In a repeat of the 2003 New Year's Party stunt, I may have once again broken my wrist, although there's a good chance I've just bruised the bone (not that a bruised bone is much fun). I'm a bit cut up as well from sliding down the street, but that's no big deal, and Mexican hospitals are really nice with much better (and faster) service that I'm used to north of the border. My doctor had a Canadian wife and his daughters live in Winnipeg; the hospital there has invited him to work there — “You've got to be kidding,” he told them. “I can barbeque for Christmas!” 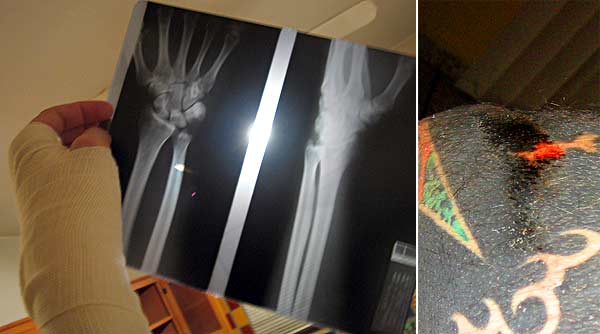 I guess I was at Scar Wars after all!

Going around in circles

One of the “fun” things about programming is working out (and around) other people's bugs and quirks. It really blows me away how often sample code that ships with various tools has bugs (generally just typos) in it. Does this stuff not even get tested? And what kind of a madman globally declares and then uses non-standard values for constants like TRUE, FALSE, NULL, and so on? And what kind of lunatic uses functions with identical names to standard Windows API calls, meaning that if you want to make calls to both, you have to write a custom include file?

Don't even get me started on the amount of bizarre and unexpected output that you get from OSS libraries and tools that have been worked on by dozens of people… and it really puts the icing on the cake when the documentation says “you know, this isn't really very accurate, so if you want to know how to call this function, just read the source code instead.” Yeah, thanks, I think I'll just write it myself.

PS. I really wish I was at Scar Wars right now!