Glory glory to my sweet satan, there was a little child born, it makes me sad, whose power is satan. 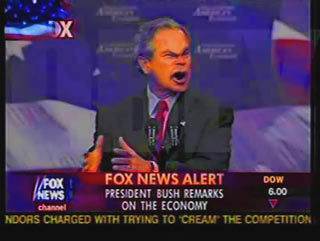 That video is kind of a joke and super sloppy but I was thinking about how easy it would be to write an “emotion changer” filter for VirtualDub or other video editing/filtering tool… All you have to be able to do is track the face (which isn't really hard) and do very subtle and rather general/repeatable pixel shifts.

I've just posted the Florida Department of Health's video talking about their new body piercing regulations (since it's a government publication it's copyright free). Please note that it's pretty dry stuff and doesn't include anything other than incidental piercing footage; it's a legal and informational video.

The new regs are a pretty aggressive set of laws (including things like the use of sterile gloves) that I don't imagine most studios in North America would meet — not that most of it isn't a much needed good idea. The only part that really kind of freaks me out is the record keeping aspect — you have to record and keep on file the race of your customers, all sorts of personal details about them and people they know, and more. In addition, the government has full access to these records and can look at them any time they want. I find that a little disturbing personally. 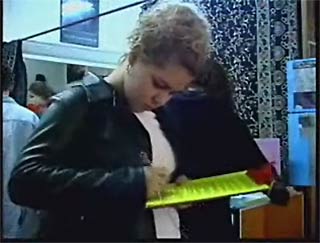 20 MEG WMV FILE; 17:36 LONG
Also, if a customer comes in with something as mild as “a suspected infection” you have to file a report with the government within 72 hours (or face a thousand dollar fine and possible criminal charges), including the person's full contact details that you previously recorded about them. Hello, 1984. You also have to hang a big sign in your studio that tells people that if they have any complaints they should call the Department of Health.

Oh, but if you use a piercing gun none of the above applies.

Only in Saudi Arabia America!

So a couple gets divored, and after the divorce a government agency discovers that they are Wiccans, and report this to the courts. Threatening to take away the parents' custody, the Indianapolis court system has issued an order prohibitting both parents from exposing their nine-year-old son to “non-mainstream religious beliefs and rituals”.

Speaking more specifically, the judge has ordered that the boy be raised Christian.

Now, I can't imagine that the ACLU won't strike this down on appeal, but not until it's cost the taxpayers (and this family) a fortune in time, money, and pain. Here's the offensive beliefs that enraged the judge:


"[Wicca] is an understanding that we're all connected, and respecting that. I celebrate life as a duality. There's a male and female force to everything. I feel the Earth is a living creature. I don't believe in Satan or any creature of infinite evil."

Don't believe in infinite evil? Well then how are we supposed to keep you full of fear and under control?

I can just see the judge's head spinning: “A male and female in everything? What's that, some queer propaganda or something?”… “Won't somebody please think of the children!?” (via MeFi)

I'm going to hell… anyone joining me?

I am most definitely going to burn for posting this mashup video. It is in extremely bad taste. Initially I was just going to post the original video clip because it's a fascinating Islamic bloodletting ritual out of Lebanon that I thought readers of this blog would find interesting, but then I don't know, I suppose ol' demon alcohol caught up with me and I somehow convinced myself this was incredibly funny in a really, really dark humor sort of way. 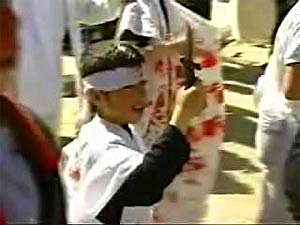 10 MB – WMV FILE
Anyway, the video clip is from In The Name Of God: Scenes From The Extreme, a really brilliant and both disturbing and enlightening movie on Muslim jihadism (including interviews with pre-martyrdom suicide bombers — check out ChomskyTorrents.org for movies like this if you can't find them for purchase), and of course the audio is from heavy metal's next big thing, Goat Horn.


UPDATE: Since everyone is asking me I'll put this into context. The intro text for the segment reads, “In places like Lebanon and Iraq, members of some radical Shi'ite communities hold a blood ceremony to experience the sacrificial ecstasy of the martyr.” According to the subtitles, they are chanting, “Proudly we mourn for Hussein. On the day of Ashura they will kill me. On that day I will bathe in blood.”

In other news I see the Canadian Navy is finally dumping their Oberon-class (hello Star Trek) submarines, and are willing to let them go for as little as $32,000 USD. Now, they're pretty ancient and would take a lot of work to get going, but that's a great deal — these things are literally three hundred feet long and carried a crew of 68. I'm sure someone must be able to find a better use for them than scrap metal…? Anyone? 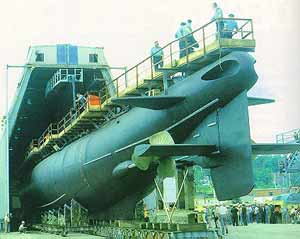 Hell, just sink it somewhere and live in an underwater house. 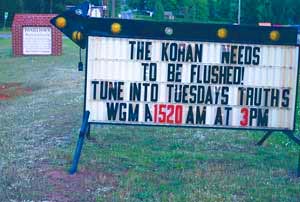 I really don't see what the big fucking deal is.

For all but the most liberal of Christians, the only path to salvation is through “our Lord and savior Jesus Christ”. To say it clearly, the core stance of Christianity is that if you don't pledge you life and soul to the Christian God, you will eventually be tortured for all of eternity. That is, people who are not Christians deserve death and torture. It's the fucking first commandment.

I say flush the whole fucking lot of these stupid books. If we keep anything, let's just keep the Gita.