Their day versus My day

1: congratulations to Clive and Gillian!

And now on to my far less exciting day. We went and checked out some graverobbed corpses and people killed in Chinese prisons to amuse Germany with Eric and Andy (and then enjoyed some of their cuisine). Jordan is on his way over now and of course my sister is hanging out also.

Oh, and I finished the painting for Nefarious's room…. While I appreciate the very generous notes telling me how nice it is, honestly, if you think this (or most of what I do) is a painting that needs talent, then you need to pick up some paint and start throwing it at a canvas. Anyone can do it. 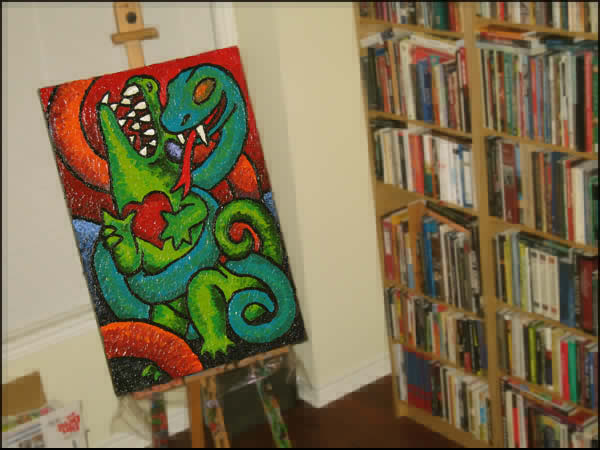 As I mentioned in my previous entry, Nefarious asked me to paint her something with an alligator in it for her room, so I worked on that today (breakfast took way too long to hit the park this morning). What you see here is just the undercoat; it's about 35% done as you see it here. 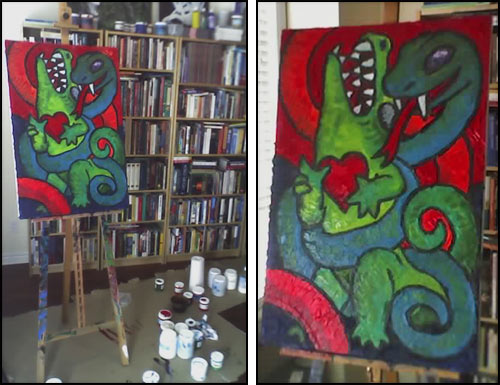 “Yeah, but you're both still reptiles”
I make no claims to be particularly talented — my theory of painting is draw something and then throw a ton of paint at it… Either way, hopefully that's art that's appreciated by three year olds? I don't want it to cause nightmares!

I've just posted a beast of an update with nearly 5,000 new pictures (all public access today). Thank you to all the contributors and to DarkEntrieS for being the cover model. The members update will follow tomorrow (Friday), and then experiences will be posted over the weekend (and of course ModBlog has been updated also). 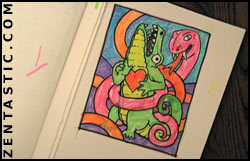 My daughter asked me to paint her a picture of an alligator so the above sketch is (very roughly) what I'm going to paint for her. It looks kind of terrible in that sketch because all I had to draw with was highlighters and a dry-erase marker. The painting is called “Yeah, but you're both still reptiles,” and I assume the metaphors are obvious they're so ham-fisted.

Anyway, enjoy the megaupdate and expect more tomorrow. Hopefully the drive/adaptor problems (which are worse after an update) don't take us offline because I've got plans to go to the zoo (the little zoo anyway) tomorrow morning. Oh, and I think my sister is visiting for about a week starting tomorrow as well which is cool…

Hey! Read this if you are a good driver! If anyone would like to help Rachel with her road trip from LA to Chicago (can you drive an Escalade with a trailer?) — she's currently in New Mexico and I'm sure would appreciate a helper… Drop her a message with your phone number and location if you want to take a break — she's great company — CC the message to me if you'd like and I'll make sure she gets it if she can't check her messages online (ie. I'll call her and pass it on). 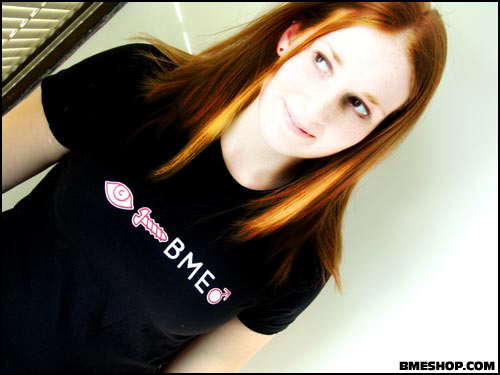 Plans for today: Blair is coming over today to work on his book, I have to get the final 2005 staff shirt numbers and addresses and all that to Ryan for printing and shipping, and I have some work to do for a project with Lane, and I expect to do an image update as well… Oh, and for those of you that are members, I did a massive update to über explicit BMEvideo yesterday.

I'd written yesterday about going to Jamaica with Rachel on our first “date”. Cayne, who lives not far from where we stayed in Jamaica, sent me the following picture that almost made me start crying! The inset is a photo I took while on vacation almost five years ago. 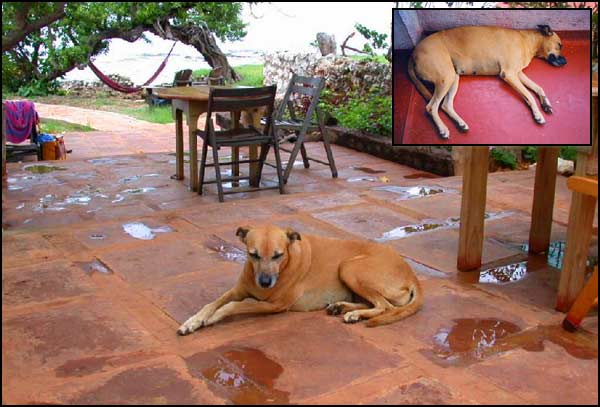 That really sweet dog slept under our bed… I know it's silly but it makes me happy to know it's doing well. Who knows, maybe one day I'll still make it down to my yet-to-exist house in the tropics?