Well, BME and ModBlog are back online (which is updated a little, but I wasted too much time today already so the updates are brief)… It said on the screen that it was “syncing” the discs, but after four hours I figured I ought to just do a hard reboot to confirm that it wasn't locked up… Turns out it was, so we're back online for now. That machine desperately needs a replacement. 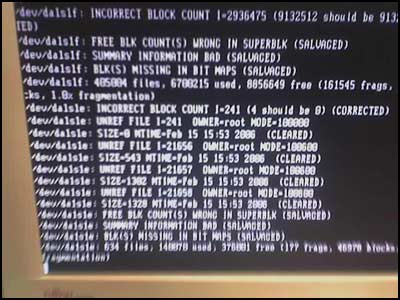 That said, I got to meet the actual people who run our hosting facility today and they're very nice, so it's not all bad… And on the way out I bumped into our neighbor (Ivan I think) who's also a real nice guy. I've been doing my best to talk to everyone I meet and getting to know the people in my neighborhood (like on Sesame Street… “the people that I meet when I'm walking down the street…”) and so far it's proving a good strategy for personal happiness. 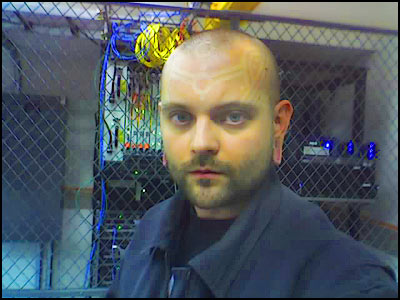 Me at the co-lo facility today
Comments (0)

So as you may have noticed, the main BME server (which includes ModBlog) has hiccupped again. I wish I had the money to just replace it but things are kind of tight right now… I've been down to see it in person and it's currently syncing its drives. It should just come back up on its own but if it's not done so in a couple hours I'm going to drive back down there and try and force the matter.

I really can't stand dealing with this type of issue. Wasting time keeping crippled boxes running makes it very difficult for me to do the core site development, but for a variety of reasons, there's not much of an alternative for at least the next few weeks unless some angel grant-giver feels like sending me a server (BME is pretty simple and just has to spit out files, but it does need an Ultra-320 RAID setup to handle the load, so all-in-all it's probably a $3k to $4k box)…

But if you're wondering why I don't really mind the hassles when it comes down to it, here's a picture of the wall next to my computer. They're postcards that readers of the sites have sent me in the past… I really like getting location specific cards. It's illogical, but I think I like them more than people buying memberships… The memberships keep the site fuelled up, but maybe the cards keep me fuelled up? Hmm… Maybe my incorrect focus on people instead of money is why I'm in this jam? 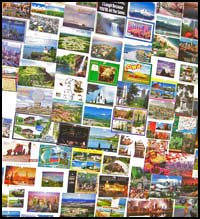 Hey! Don't forget to listen to my DJ sets tonight.
One entry down from this one has the details!


WOODY ALLEN: Whenever I go to a party, I always drift off into one corner — you know, like Montgomery Clift — and I try and look pensive and I thumb the backs of leatherbound volumes that I've never read, in the hopes that some really fantastic woman — flowing black hair and diaphanous gown and black eye-patch — would come up and ask me what I'm brooding about. But so far no one ever has.

PAUL KRASSNER: What would you say if one did?

WOODY ALLEN: I would probably stammer and stutter and drop things.

That's from an old interview in The Realist (1965)… Reading it I really felt like it was echoing my own story, although I think I can say that I have met some really fantastic women by just being me and hiding in the corner. You wouldn't think it would work but sometimes it does — that said, I certainly have done my share of stammering, stuttering, and dropping of things. I'm a relatively confident person in general terms and feel like I've been quite successful in most endeavors, and usually have no problem meeting new people, but while I love the thought of meeting another fantastic woman (one day), I won't deny that it terrifies me as well.

I feel like I'm in a funny position, because not only am I a pretty weird person which limits the amount of people who are interested in being around me (and that's OK), but because of my work with BME and the visibility that my life has, it makes it hard to meet people in any normal or private way. Not that I'm looking to go out and meet anyone right now, but maybe if I get started on the stress now it will be gone when the time comes — or it will have snowballed, I don't know… It's not like I even know where to begin!

I was pulling data off old hard drives this afternoon and stumbled across a website documenting Rachel and my first date (in Jamaica). It's both very suitable and utterly unsuitable for a Valentine's day post? But it was a nice week (note: both Rachel and I are much thinner these days, so excuse the chubby pictures, and the writing is upsettingly pretentious and amateur).

Tonight I'm co-hosting Saira's radio show, doing two forty five minute sets. The first set is a pretty cool mix of late sixties and early seventies psyche-rock and teen beat stuff from Mexico, Peru, Cambodia, Turkey, and Southern Africa, with a bit of Italian soundtrack music thrown in for good measure. If you're the sort that gets high, turn up your speakers and light up for this set. Seriously.

The second set is a “lovesongs for the loveless” mix (I'm all about the daily theme I guess)… It's pretty much what I used to play on my show and on BME/Radio, with some Neil Halstead, Kings of Convenience, Julee Cruise, Mercury Rev, Spiritualized, Papa M, Sodastream, and then a little kick of Phoenix, Pansy Division, and Mika Hase at the end to keep you from staying depressed.

Enjoy! Send me a message and let me know what you think of the show!

Good to be back online

I don't really have an entry for today… My car pickup got bumped to tomorrow, but I did redesign some of the BMEvideo software to make updating much faster. And for some strange reason my insurance payments have dropped from $800+ a month to $100 even. I think it might be because I told the older lady that was dealing with my account about how I'm back in Canada with my daughter because of a breakup and she got all sad… I seriously thought she might cry.

Anyway, I wanted to point out the massive speed increase you're seeing. As well as the routing problems in the Toronto area, it was some incompatibility with our switch and an upstream provider. It was Rachel who figured out what the problem was and got it fixed. So full credit and thanks to her! 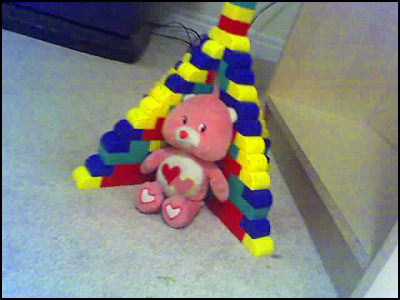