Sorry I haven't posted here as much as I'd like. I have a great article half written on why “Intelligent Design” is right — but not in a way that involves a God. Anyway, the non-posting is because of all the stresses lately (server)… I mostly try and keep ModBlog updated because that generates memberships (which pays for the servers). I should add, since there's been some concern about me being too lecherous (to the point of being disrespectful of Rachel) on that site, that the voice I write in is tongue in cheek and intended to drum up interest in BME/HARD. So please don't think that I'm actually hitting on people or desperately horny — it's just a fun persona that I write with there.

ANYWAY. So I thought I'd show you more phonecam pictures of what I do in the morning before I head off to get my inner finger tattoos touched up this afternoon. Mostly we build a lot of towers with blocks and stack them up with animals: 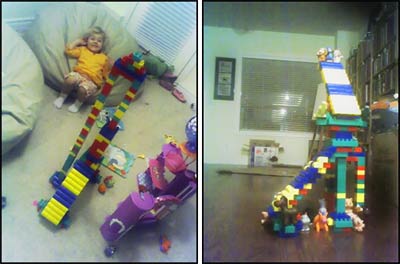 And sometimes we go to the zoo. 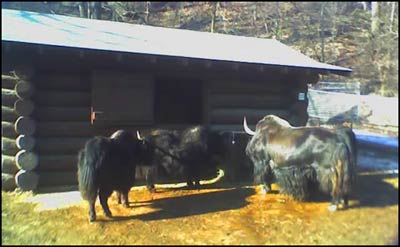 We also paint and make things out of clay. 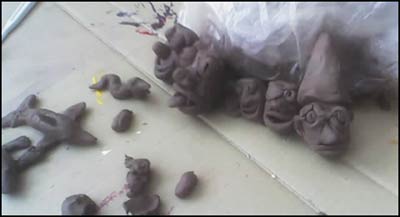 Honestly, other than the deep and obvious personal loss involved, it is nice to be back in Toronto and I have a lot of fun with the changes… although it will be much nicer when all of the dregs of the move are cleaned up so things aren't so tight. I still have a great deal of hope that things will turn out for the best in the way that I want, and even if they don't, I'm sure they'll turn out well.

Other than that, I've had some wonderful news in the publishing sphere and have been asked to be involved in another very exciting project (which I will wait to mention in detail until it's done). I say this every year, but this is a year that a lot of positive things could happen in my life, even if the year started on an unpleasant note. I've said that (the first part) almost every year, and I think it's always been true… Definitely a good thing if you move through life believing this could be the best year yet? It's like the opposite of the psychologist scene in Office Space.

That said, if I had a million dollars…

Annoying those around me

Here's my old ringtone and here's my new one. Also on my phone are this, this, and this ringtone. Feel free to leach them if you have no respect for copyright. From my phone as well:

Oh, and for those of you who didn't see the query on Jon's page, he's looking for gamers in Toronto (contact him, not me, if you're interested). As I write this he's actually down the block at the local wargaming shop learning some WWII miniatures game.

It's funny when people stumble across BME and then get so freaked out that they feel the need to send me hatemail… It happens every time BME gets linked from some mainstream site — I forget sometimes that there are still people out there that are deeply upset when exposed to body modification (to say nothing of the trauma of Brokeback Mountain).


Charlie then browses the site for another three minutes before sending another message:


Yeah, ok Charlie, I get it — you're no “fag it”.
After eight more minutes of viewing:


After that Charlie kept sending messages for a while but they were blank; one nineteen minutes after the last one, and then another eight minutes after that. I presume that after that one, his head exploded and his ability to communicate was terminated.
Comments (0)

I mentioned my wall of postcards a few days ago, and it got me a few more to add. I generally only add ones that have a location on the back because it's like a world map of BME readers (so while I appreciate all cards and letters, I only generally add the ones that have the location they were sent from on them)… But I like reading the little notes on the back so I was quite tickled at these little drawings:

Other than that we went to the park today.
You may have noticed that the BME (as in the main site) stability problems are getting worse (as I write this it's in a reboot cycle). Yeah, I'm not thrilled about it either… The new machine is being ordered today (since the car was sold there's finally a little money), so some time next week the problem will be solved… Fingers crossed that it manages to stay mostly online until then — we'll try and mount the filesystem via NFS later today to keep it more stable.

It's hard to keep this updated!

Today was a lazy day spent building castles and towers out of blocks, doing a little image processing, writing for modblog (the biggest reason why I don't post here that much I suspect), and an assortment of little tasks including prepping a new article titled “What's so special about New Jersey?”

Other than that, Rachel and Emrys are coming to visit soon, both of which I'm looking forward to quite a bit, although in very different ways that will be commented on here using very different sorts of innuendo. Finally, since it makes me very uncomfortable posting entries without pictures, here are a few old ones:

What better to fill it with than people I care about?

* A buck is the object that a mold is taken from.