There's not a ton of new stuff in the BME newsfeed, but especially for IAM's rapidly growing transgender community, this story about an Indian eunuch who recently won a mayoral election but has been denied because of his gender may be interesting.

In other news, I thought this tattoo removal story (well, transcript) really sucked. Not because I have a problem with tattoo removal, but because this woman said that having her children's initials tattooed on her leg was a “negative image” and would damage her career (she owns a restaurant with a number of tattooed employees) — although she does say that her children were hurt by the decision. So ignoring the specifics, the larger statement she's sending is that she cares more about her restaurants stuck-up customers than she does for her kids. Nice.


I was reading one of the latest issues of BURST magazine (a Japanese magazine that regularly covers tattoos and body modification in general), and I came across the ad you see on the right. You've probably seen similar ads in American magazines as well; the companies selling bulk jewelry at rock-bottom prices. There's plenty of them on the internet too.

Anyway, as the person who named and helped develop surface bar technology (with Tom Brazda of course getting the primary credit), it really annoys me to see companies selling what are basically glorified curved barbells. A surface bar travels parallel to the skin for its entire length, and then turns abruptly and exits the skin perpendicular to the skin at that exit point. The bars you see on the right are not surface bars and they will not heal as well as the real deal.

It sucks because then people try them, assume they don't work, and never really figure out how to do proper surface piercings. With a little common sense, they're not hard to do well… I do find it rather disturbing that even though there's an obnoxious article* on the subject plastered on the top of the surface piercing section, people continue to send in un-viable piercings that will simply reject and scar. There's no need for that!

I made a “short-list” of the things I have to do before the end of the week, in order to prepare for the trip to London in a week (lots of filming, interviews, suspensions, meets, Gumball 3000 stuff, etc.):

I also have to write a complete BME operations manual, but I don't think that'll get done before I leave this time… So fingers crossed that I make it back alive. Assuming I do, I'll have an operations manual done before the Gumball rally, so on the slim chance that something terrible happens, everything will keep running even without me.

Anyway, on to the regular news. If you're not interested in that type of commentary, you can stop reading now; there's no more BME stuff in this entry.

In April 1980, Gregg Easterbrook wrote an article criticising the danger inherent to the Columbia space shuttle… His fears were proved correct a few years later when disaster struck. He's just written a new article for TIME called The Space Shuttle Must Be Stopped — “it's costly, outmoded, impractical and, as we've learned again, deadly”. We're also seeing a series of stories on how NASA repeatedly ignored and silenced warnings. First, I think we need to stay focused on space research. I think it's essential… But…

Most importantly I think we need to make sure that NASA remains a civilian organisation. My greatest fear in all of this is that space research moves over into the military sphere. What monsters that would unleash! We must ensure that the universe belongs to all people, not simply to those who'd subvert it into a tool of war.

Now I'd like to focus on two stores that I believe deserve your attention. The first is on the ownership of voting machines. This absolutely incendiary article makes a strong circumstantial case that voting machines in the US are rigged and owned by the powers that currently control America. Seriously, this is a big deal if it's even remotely true. What if there really are no longer democratic elections in the United States? If that's not grounds for violent revolution, I don't know what is.

In a related story, faking the voice of the people, the CSM looks at the recent phenomena of “fake” letters-to-the-editor being submitted in mass to newspapers. Let's not kid ourselves — people want to agree with their neighbours. It's a lot easier to say “yeah, ok” than to say “no” to something that you feel is the majority view.

Seriously, think about the implications of the above to stories.

They are a very big deal, and a direct threat to democracy and freedom.

Really, I'm just fiddling with it a lot now to fine tune it and see what needs improvement and what malfunctions with odd input (so far worst case it just outputs nothing; I haven't been able to induce a full-on crash yet)… Below are some more sample maps. I can't imagine anyone except me will find them particularly interesting.

The dynamic scaling engine is up and running. Maps are being properly selected, and, at least at first glance it's VERY fast. I've been adding more functions to clean up the output (full colour selection, the ability to lock the images height to width ratio, etc.). Below is the course (as the bird flies) of this year's Gumball 3000: 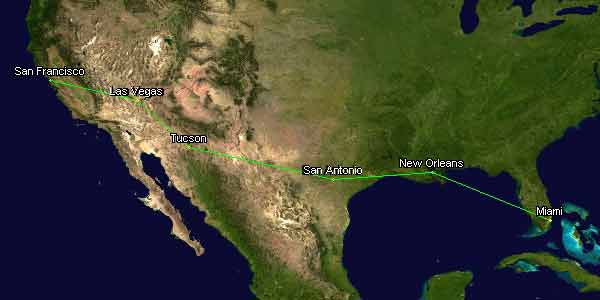 Now I'm going to turn on the bots and generate all of the nighttime files as well; one of the first things I'm building is the tracker plugin, so you can display everyone who's recently come to your page. You can also tell it what time zone you're in, and it'll automatically use the night time map if that's when it's being asked.

PS. I am still in need of good non-projected maps. Specifically I'm looking for a map set that includes good high res border overlays, colored countries/states, and so on. There's got to be someone out there who has a mapping tool! Hmmm… Maybe I'll stop at Staples tonight and see if they have anything like that.

February is hard to spell

First of all, I've made the following addition to the TOS… I've done my best to write a policy that (a) serves the purpose of IAM, (b) meets the wishes of the IAM community, but (c) doesn't restrict the personal expression rights of the members… I hope this works alright, and feedback on it is still welcome of course:

Now let me tell you something that really sucks. NASA's budget is now under $14 billion annually. They don't even have enough money to upgrade the sapce shuttle in order to make it safer, although the cost of doing so is less than the giant pile of cash big business handed to Bush's election campaign.

Since Bush seized power, the defense budget has had its anuual spending increased by about $70 billion yearly (from $329 billion to about $400 billion), not to mention the $20 billion annual increase on Homeland Security in that same time period and other associated costs.

So if there's $100 billion dollars just lying around (since he's claiming to reduce taxes), is a wise decision really being made by funnelling that to war efforts, rather that valuable space research? Here are a few of the pro's, as I see them for sending that money into the space program:

And here's the kicker: it's very expensive! Space research is by no means cheap. Which means that all these corporations that are currently getting very rich off the war efforts could be getting rich off the space program as well… So does that mean they prefer war?

Seriously, I have to get to work on catching up on an image update, and I have to be careful that any writing efforts be put into a new publisher's ring article… Any suggestions? I haven't decided yet what to write on…

Anyway, here's a nice fluff piece on tattoos (not that it says anything)…
Been seeing those more regularly.

* * *
I will briefly say that I am very sad to see that even though Bush yesterday suggested the opposite, Congress is already saying that the shuttle program will be grounded for years* while an independent investigation looks into the cause. The article also makes noises about funding** that don't neccessarily sound like good noises. I hope this isn't the end for the US space program.

Also, while I am very glad that there are dual investigations (official and independent) already going on into the cause of this accident, it does illustrate how odd it is that there still hasn't been one into 9/11…


* “You can expect the shuttle (program) will be on hold and we will be waiting for the investigation to be completed”; Remember how long the investigation took last time?
** “NASA, the administration and Congress have faced tough choices in regard to funding … There has never been enough money to do all the things we want to do in space. But that was true before this disaster and will be true after this disaster.”
Comments (0)