If you use PhotoShop or similar software, you can adjust the levels on photos. Because modern digital cameras have a great deal of sensitivity, even when a picture appears extremely dark, it may still have excellent detail embedded in it.

Please consider correcting the levels on photos you send BME before submitting them — the below example was done using the “auto levels” feature in PhotoShop, so I didn't even have to think to make it happen (just a single menu click): 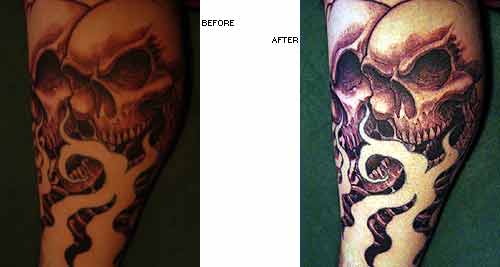 I'm off do do another image update this morning; until then here's a quick news blurb…

Rumsfield's about to blow while the economy continues to crash. Bush announces that Iraq will be a “model of democracy” (model, as in a small copy that doesn't actually work and eventually gets thrown out — I mean, can one seriously expect the guy who helped destroy democracy in America to institute it in a nation that doesn't even understand its basic concepts?) under full US control… and that it will of course be run by a US citizen.

The experts on the other hand predict chaos and violence, and the Saudis have proposed an Islamic occupation which could convert Iraq into a terrorist nation that actually does pose a threat to US citizens.

The US has just surrendered to North Korea's demands, illustrating to the world that WMDs are the way to go, and Turkey has been given it's bribe in exchange for its support of the war. I expect that other nations will flip as well in exchange for US dollars… And the end result will be clear: extreme suffering for both the American and Iraqi people.

In the propaganda department, the Justice Department misclassified about half of its cases as “international terrorism” when they were not, and CBS has said that it will censor any musician that makes anti-war statements during the Grammys this year. One of the biggest scams the media plays is the “no one is anti-war: if you're anti-war, you're in it alone” game… When in fact the citizens of gaia are opposed to war — only the Reptilians are for this war, and they've been consuming our kind for eons.

And while money is getting poured into war, don't forget about the heroes that are getting screwed over.

Well, I just double checked the logs and the credit-due bot looks like it may well actually have been sending the messages. I saw so few entries that I thought it wasn't working, but as it turns out, far far far far far far far far more people than expected have extended their accounts.

So you got a two-week freebie :)

Oh, and I've also fixed the checker that makes sure you're not using an expired account to access the system. Currently it's active on the main viewer and index module, IAM alive, and the forums. So if you're a clever cookie, you can still update your page, but nothing else really.

Thought I should mention that the ACLU has got their analysis of the “coming Bush dictatorship” up. Here's a quick summary of some of the points they raise about the new laws the fascists that seized control of America are trying to force on the citizens (or should I say, prisoners of war):

Yay for the land of the free!

I really wonder — are the citizens of the former United States of America willing to see it turn into a Bush military/corporate dictatorship? What does it take to push America to the brink of revolution and civil war? Because if this bill really goes through, every trace of what made America the shining beacon of liberty will be gone…

Oh, and remember how America finally agreed to share it's “intelligence” with the UN weapons inspectors? According to the inspectors, the information they've been given is total “garbage” that hasn't panned out into anything but false leads and lies.

In other news, Holocaust-denier Ernst Zundel is set to be extradited to Germany to face charges (Germany has a very strict policy on that type of speech/hate-speech), and Canada has said that even though he's a Canadian (permanent resident status) and hosts his site in America, they will not honor his application for refugee status.

Now, Zundel is a hateful fuck and in some ways I really don't give a damn if he burns… but… I'm a German citizen and I'm also wanted on freedom-of-speech related crimes in Germany and could face real prison time there if I was forced to return. If Zundel is successfully extradited, while I highly doubt the same would happen to me, it opens that door.

It makes me very uncomfortable when nations conspire to punish people for freedom-of-speech issues that are fully legal in the country they were uttered. That is, to give an analogy, it's legal for me to smoke pot in Amsterdam. Let's say that's where I live, and I hold a dual Dutch/American citizenship. It would be fundamentally wrong for America to be allowed to extradite me and prosecute me for “crimes” that I committed that weren't even crimes in the locale where they were committed.

My years working with Internet casinos very clearly illustrated that point — quite a few entrepreneurs who moved to the Caribbean and ran businesses out of Antigua, etc. where they were fully legal found themselves arrested and imprisoned when they flew to America to visit friends and family.

OK, the image update (part one of three I'm guessing) has been posted. I might do another one today, but realistically I have to tackle some IAM tasks instead, including:

There's a lot more I have to do as well, but that's the core of it, and if I get those done I'll be content. Here's a quick sample of my morning mail:

You people are so messed up, you don't even know what the hell is happening, you will soon find out what hell is all about!!!!

You've got to love the “if you won't post my experience, I'll send it to a site with lower standards!” threat…. It just goes to show that there's a total lack of comprehension as to why there are requirements for spelling, grammar, length, layout, and so on.

I know I keep saying this over and over, but I really really want to emphasize that people should strongly consider being more discrete about the source of their heavy mods (tongue splitting, implants, subincision, hood splitting, and so on). Every update I get photos that could in theory get people tossed in prison. I know everyone wants their credit and their name, but please realize: in most areas these activities are illegal.

Time has shown that if a practitioner maintains a low profile, the authorities tend to leave them alone, but they will be forced to prosecute you if you show up too much in the media (including BME) by name, or have someone walk into a hospital (and that happens to even the best eventually).

In the olden days, practitioners tended to be word-of-mouth and did no advertising and made very sure that their name never hit the public. If someone wanted to get in touch with them, former clients would act as stage one “screeners”, keeping away both fools and feds. That is, the practitioner is unknown, but the client is not. If someone wants a subincision, they track down a client, and get a referral. This protects the practitioner without making the work inaccessible.

The fact is that if you do good work you'll become well known in the subculture even without ever speaking your name in public. When you speak your name publicly, you face becoming well known in the mainstream, and that's when the whims of the mainstream start to put you at risk. All it takes is the wrong doctor or politician seeing it, and suddenly two hundred practitioners are arrested with a rock-solid case against them.

I'm not removing names if people insist on them being included, but I really would strongly urge people to consider the needless risk they may be putting themselves at when their name is emblazoned in public. We may well be criminals in the eyes of the law — in that case, best not to advertise our crimes!