I had really weird sleep last night. I'd sleep for about five minutes, and wake up, then fall asleep again maybe ten minutes later, and so on… It's kind of hard to describe… I could tell I was really sore, but at the same time, I couldn't tell. Or like feeling really good but really bad all at the same time, but with them canceling out so you don't really feel either. Hard to explain but I sure am tired and messed up though. 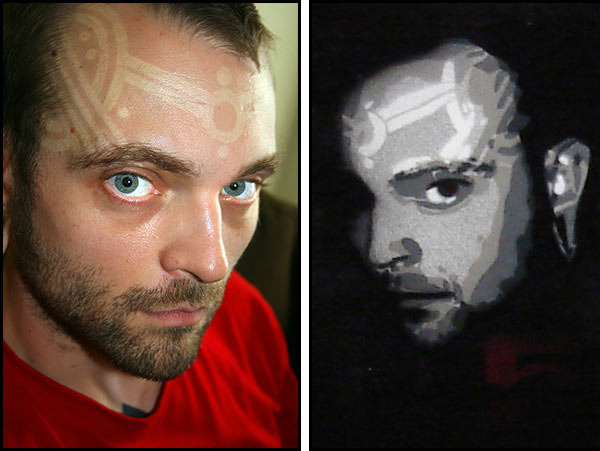 I took that unedited picture (on the left) with my new camera… I really like it. It's funny, just switching to a better camera/lense (Rebel XTi versus a Powershot SD800 IS) improves pictures so much. Princess Anna made a much nicer picture though; the stencil on the right is by her. If you see it sprayed around town, please don't draw a silly mustache on it.

Other than that, I'm just so thrilled with the framing on the big kaiju painting (and I still have to figure out where to put it — I hate seeing it just leaning up against a wall because I don't have space for all my paintings). I can't wait for my truck to be back on the road so I can pick up some lumber to make frames for everything in the house. I think my next painting is going to be another in the kaiju series (sort of — you'll see). The image on the is the background I'm working on for it.

I am going to go to the gym now.

Oh and I have to redesign the front page of BME in the next week. It's right out of the stone age. Not that I'll change a lot, but it needs to be a little more accessible and it has to reflect all the new parts of BME that have grown since it was re-designed in I think 2001.

I put a nice big frame on this painting. I like the fairly classic frame coupled with the goofy artwork… (The paper on the corners is to protect it, not part of the frame of course!) I have no idea where to put it because it's so big though! 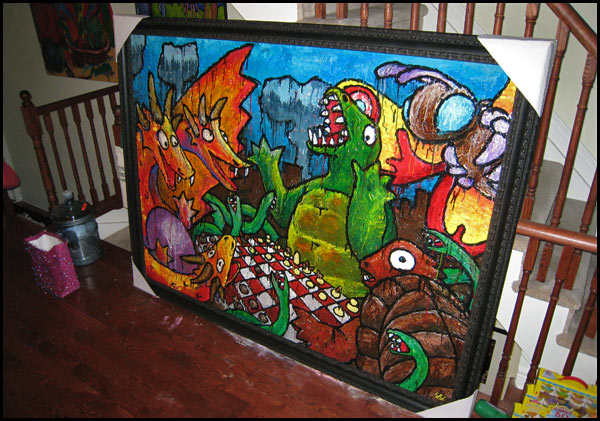 We got to the movie early enough to be near the front of the line, which meant nice seats just off centre, due to a reserved section that was taken by Jovanka from Rue Morgue. Anyway, my ticket was #366 (which I was told earlier in the evening was a lucky number) and was one of five or so door prize winners that got drawn. I won a shirt and stickers and a graphic novel and a bunch of other stuff… 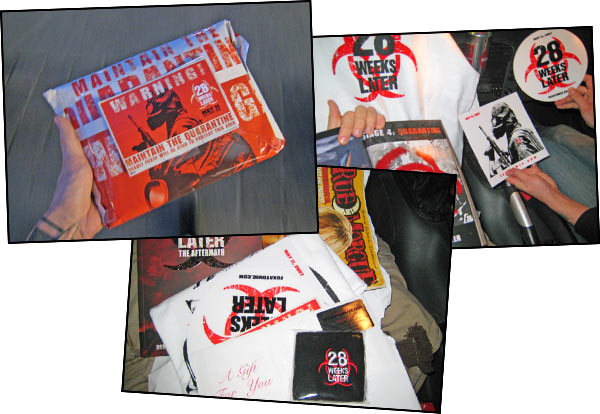 And what a crazy Colbert Report.

Through some miracle I've kept this place relatively clean until now in terms of things that are not going to be too much of a pain to deal with before the end of my lease. Today though I had a can of paint explode in my hand and it blew a whole bunch of polymer and pigment onto my wall and floor. I cleaned it up as best I could but now I am definitely going to have to paint that wall. 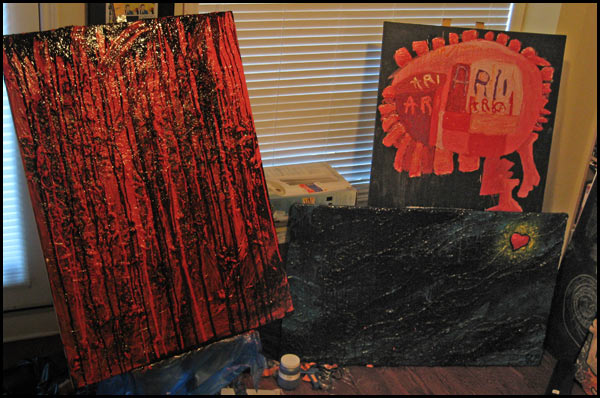 I'm going to try and not think about it until tomorrow.

I still have no idea what I'm going to paint on that canvas. I'm still just building up a background. The explosion also damaged the painting next to it (a painting for a friend), but I don't think it will be a big deal to fix because this particular polymer mix peels very easily (so I'm not worried about the floor either).

Still, a big pain in the ass. Maybe someone will feel like trading fixing the paint job on the walls for a painting from me or something. I should probably stick to chalk. Far less destructive, and at least it only takes rain to clean that up. 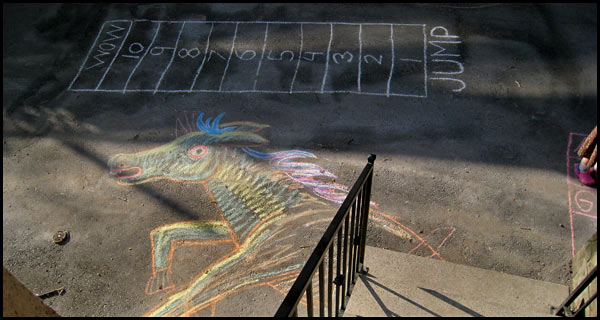 Well, most of my day was great.