Well, it's not really that good news, but tomorrow an AP7900 Rack PDU goes into our cage so when IAM has trouble like it did earlier we'll be able to power cycle it remotely… Which means longer downtimes as we go from alpha to beta test should be very rare (because we can always do a reboot).

Please support BME if you are able to.

Other than that, I think I'm going to post today's piercing update tomorrow as a part of a double update, as well as the BME Video update that was planned for today.

Oh, that reminds me, here's some funmail I just got:

The stupid loony, BEACH, STUPID FAG, I SHALL see I SHALL kill Only from for you in the world awful it is created ! I Russian, I soon shall arrive, wait ! STUPID BEACH

What is your pleasure?

For those of you wondering what the new box is, it's a 3.2 GHz Dual-Core Pentium with 4 gig of memory and a combination of attached and internal RAID arrays totalling about 1.5 TB of usable space (and about 900 gig of that is on a separate server capable of doing all of its own image serving). I've watched it under a variety of load situations, and Apache rarely breaks past 10% of CPU use. Over the next couple weeks I'll be adding features and expanding the user capability, so if you have features you'd like to see put in place, now is a good time to tell me.

Fingers crossed that it's not a “too good to be true” situation, ha.
(Original forum unavailable, sorry)*
Comments (0)

Reminder: We will be taking IAM offline this evening to move everything (well, your user files — diaries and forums mostly) to the new server. Tomorrow morning I'll give it a final round of testing (CT has already got it 99% working), and then it gets turned back on and growth and new feature development can re-begin.

Sorry to anyone who had problems accessing all the sites last night; apparently one of Cogent's main lines went out. Sheesh. Problem after problem. It sucks because it's made some of the updates this week and last a bit smaller than usual (so please, re-submit your pictures if you didn't see them post or there was in issue). Some people say the Internet is choking under unexpected types of usage…

Anyway, sorry to keep you updated with grody vaginal-esque photos of the inside of my mouth, but here's day four of my uvula piercing (I post them here because it's the easiest way for me to submit them to BME and write the captions and all that). It's doing fine, is barely sore, and my only worry continues to be keeping it clean. I've tried brushing it and scrubbing it with a q-tip but it moves around too much so I think I'm going to have to grab a clamp so I can hold it while I'm doing this. There's very little buildup so far but it's enough that it needs to be dealt with.

(That's just a spit bubble on the left side but you can see some plaque around the bead on the right).

I'd definitely say that if you want this piercing you should not only be in 100% control of your gag reflex (I can make myself vomit or stop vomitting just by thinking about it), but perhaps more importantly, have good dental hygeine. It's weird, I was talking to a friend the other day and they thought it was eccentric that I flossed, and that my gums didn't bleed when I brushed my teeth. Seriously! Brushing and flossing is important if you want your teeth to last. My teeth are a bit smoke-yellow in tone and I have a few chips (mostly from various tongue modification experiments), but they're fairly healthy and my mouth is clean I think (and simply having this piercing makes me more conscious of drinking regular amounts of water and paying closerattention to my oral health).

Anyway, I feel a little better this morning (I felt messed up on Sunday night) but I think it might be because I took a Lorazepam to help me sleep (still woke up at 4AM) and it's still in my system a little so I'm calmer. Sometimes I wonder if I should write all my medical stuff here in this little blog, because I've seen all these articles about how potential employers, contacts, whatever, tend to do searches for your name in Google so anything you write about yourself can be used against you (to say nothing of the CIA using the mega-sites like MySpace to do aggressive “social mapping”)… But I figure anyone that would ever work with me would know that I'm a bit weird, and would hire me for my eccentricities and abilities to turn those into an advantage rather than keeping me from a job.

Or at least that's what I keep telling myself, ha…

So my doctor's appointment was a total bust. I went there and discovered that through some error he had been double booked. The other person was a lot younger than me and had come from farther so I gave him the appointment and rescheduled for tomorrow. I think they'll have to take me off this mood stabilizer. I've been really cranky and have been fast-cycling through moods on it.

Anyway, I was reading The Trouble With Being Born today (at the doctor's office while I waited for my non-appointment). There was a passage that I thought some people reading this might appreciate:


When Mara, the Tempter, tries to supplant the Buddha, the latter says, among other things: "By what right do you claim to rule over men and the universe? Have you suffered for knowledge?"

This is the crucial, perhaps the sole question we should ask ourselves when we scrutinize anything, especially a thinker. There is never too great a distinction made between those who have paid for the tiniest step toward knowledge and those, incomparably more numerous, who have received a convenient, indifferent knowledge, a knowledge without ordeals.


If Cioran is right, I suppose I must be doing OK because I've had a couple of “ordeals” and whatever knowledge I have seems to have been aquired painfully (not that I'm complaining). 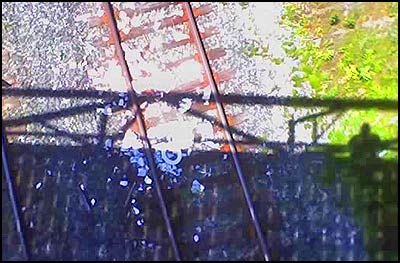 I went out for lunch and to drop off a promised CD of early seventies and late sixties Turkish psychedelic rock music, and I guess someone was having fun on the railroad tracks watching toilets get smashed. I just had my phone with me so the photo isn't the greatest…

How will I celebrate The Lizardman's special day? By going to see my psychiatrist! 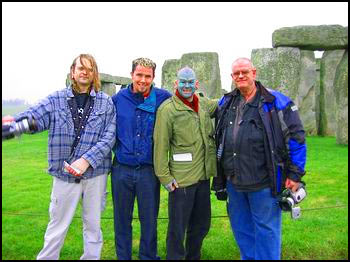 Me, Marty, The Lizardman, and Patrick
PS. Click here for the video of that photo.