Todaty in photos (in part)

It's lucky I didn't get in a crash: 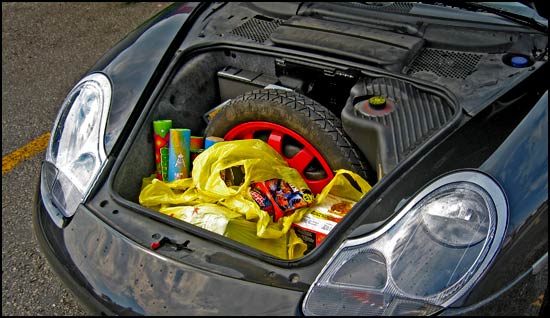 Because the trunk was full of fireworks; this photo is part of them: 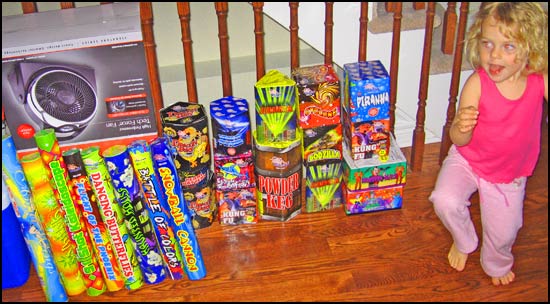 The police have advice for me: 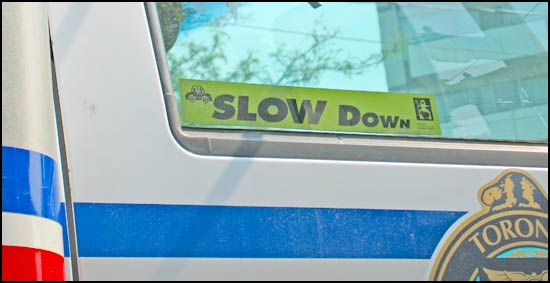 Actually, the whole car is full of stuff: 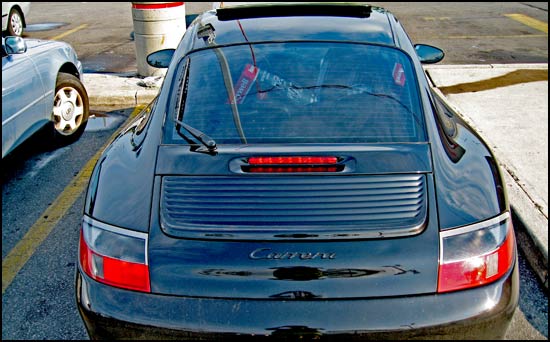 And right now, Håvve and Muffe and Phil are tipsy: 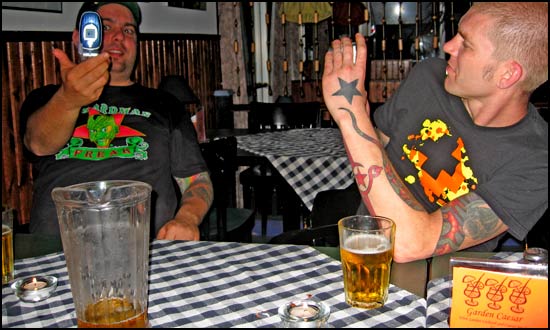 Messaages will be answered to in the morning.

You know, while I totally agree with the sentiment in the left ad (both in terms of vibrating razors working well, and in terms of the sexual allusion), and I have no problem with ultracock, these sure are dirty ads for mainstream companies to put out: 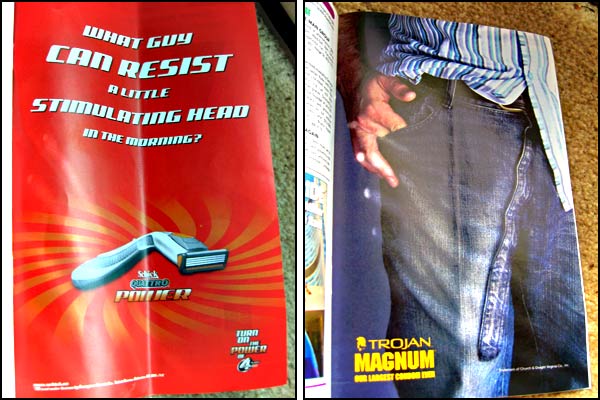 That said, I don't think though that these ads are being used in the “straight” market — these are from this year's increasingly corporate Toronto Gay Pride. Now, there are a lot of companies that have different ads in different markets, and I understand how that makes sense, but it really annoys me when corporations or political groups think they can get away with stuff like this: 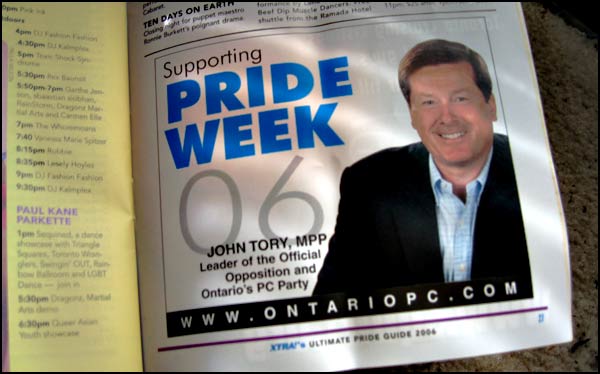 …a far more evil version of being nice to someone's face, but then slagging them behind their backs.

The belief that spending a few bucks on advertising somehow makes up for being part of a political party that has gone out of its way to restrict, hold back, and even threaten to roll back gay rights, is delusional. Same goes for companies that donate to these parties or have discriminatory internal practises, but I hope it's a long shot assuming they they can trick the queer community into giving them a stamp of approval just because they hire some ad agency to make them look queer-friendly.

I really hope that people haven't become so clueless that billboards speak more loudly than action.

Let me start this with two of my recent favorite quotes about BME:


"Highly condemnable and revolting scenarios of gruesome violence against humans."

The way I see it is that pornography involves paying people in order to provide sexual services for the primarily pleasure of other people rather than those involved. BME on the other hand is a place where people can share the experiences, sometimes of a sexual nature (since that is the core of a biological behind, that make them happy (and they're not paid to do these acts — they are genuinely pleasurable and personal experiences that the people are already doing, and have been kind enough to share and talk about)… Something more akin to a communally generated modern anthropology text is how I see it.

PS. Click here for information from boingboing on avoiding and circumventing net censorship.

Unfortunately not everyone agrees, so BME is under legal threat in dozens of countries if not more, many who have actually put state-wide bans on BME by blocking our IP range completely from entering their country (for example, the screen above left is what you see if you view BME in Bahrain, home of Michael Jackson). Others like Germany have taken legal action against Google and other search engines in order to have BME de-listed for viewers in their nation so they can't easily find it. In addition, hundreds of thousands of locales — workplaces, universities, Internet cafes, and so on — like in the picture above right have chosen to add blocking software for various reasons. And that says nothing about the secondary censorship like being blacklisted from advertising networks, many banking networks, and so on, all for, in effect, being an honest journalist and not censoring people. So I guess since I'm not willing to censor you, they censor all of BME.

It just sucks because every other site out there that I know of deeply censors its content (not always for strategic reasons; I'd say more commonly because the owners agree that some forms of self-expression are “wrong”) — and thus quietly tells their viewers that there are permissible and non-permissible ways to live. As a result, they can plaster their sites with ads and market it in traditional and conservative arenas (and thus rake in often serious cash)… and with more money, they advertise in turn, which helps them grow and shape opinions with their growth, and inadvertently push for a much more narrow (and more often fashion oriented) view of modification.

Capitalistic demands when coupled with official or non-official limitations on free expression can have a devastating effect on the freedom of minority groups, and one that I think is very difficult to see if you don't happen to fall inside that minority group. It's especially difficult to be empathetic to as an outsider because I think for most people it's difficult to even accept that heavy body modification and play are “deep drives” at the same level as sexuality and so on, so it's hard for them to perceive those people as an actual cohesive minority, rather than simply a collection of unrelated deviants.

Meh, I really hope when I'm an old man living in poverty that ethics provide more consolation than money, haha… But I just don't think I could handle running BME if I had to tell some of my dearest friends that I was afraid to publish the stories and photos of their lives because I was afraid of how some government or corporation with the belief that they have more right to control people's bodies and lives than the people themselves would respond to me.

Well, enough with the whining and on to work.

Anyway… I've just posted an experience update. Thank you to the writers and review team as always, and to horrorbusiness for being today's cover model. In theory there are updates scheduled for tomorrow and Friday as well, but I have to be honest and warn that they may end up getting pushed to next week because of BMEfest. I have a small to-do list still sitting here… I have to go do an oil change this afternoon, and on the way back I'll pick up the fireworks!

Oh, and some senior Jehovah's Witnesses just came to my door to invite me to their “summer retreat”. Yeah, not gonna happen, sorry. If I “convert” to anything, I'm just going to pretend to be an Anabaptist so I can integrate better into Amish or Mennonite life when the collapse comes… and it's coming soon. When the US dollar crashes to complete valueless, oil has peaked out and over, you're gonna wish you could at least quote Menno Simons —


“The regenerated do not go to war, nor engage in strife. They are children of peace who have beat their swords into plowshares and their spears into pruning forks, and know no war. Our weapons are not weapons with which cities and countries may be destroyed, walls and gates broken down, and human blood shed in torrents like water. But they are weapons with which the spiritual kingdom of the devil is destroyed. Iron and metal spears and swords we leave to those who, alas, regard human blood and swines blood of well-nigh equal value.”

But seriously, I've rambled long enough. Time to cook some food and then work.

If I don't hear back from anyone, I'll do a rental, but does anyone reading this (more specifically, someone coming to BMEfest) have a pair of mics, cables, and stands that they could let us use for the day? Please contact me ASAP if you can help with this.

Other than that, here's a psychedelic hippy-painted Beetle I saw parked at a Bug shop yesterday. 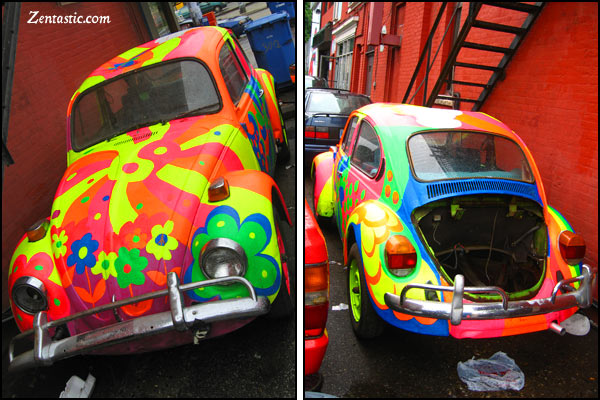 Ryan did an awesome job printing one of the trickier print jobs I've given him, and check out how gigantic the backing is! And I know I've said it before, but I'll remind that assuming print sizes worked like they should have, the front logo is 6.66″ across. 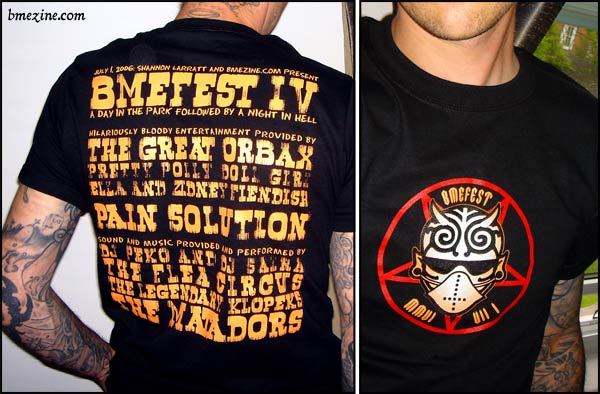