How many do you have?

So I'm watching Batman Returns right now with Nefarious while we build stuff and draw, and it reminded me I wanted to quote from a business book subtitled “The Link Between (A Little) Craziness and (A Lot of) Successs in America” (since Batman is pretty much the definitive manic/psychopathic entrepreneur). Anyway, the following characteristics were listed, and top entrepreneurs were asked whether they agreed they were characteristics of entrepreneurs such as themselves or not:

All of the entrepreneurs (Internet ones in this case) agreed that the description was accurate, even rating themselves “7 out of 5″ on many of the characteristics, although there was some disagreement on the paranoia and sexual acting out issues (but the author suggests that might be because they're “the bad ones” to admit to). I'm pretty much “yes” on all of them, and I've got no problem admitting that I'm also paranoid and sex-obsessed!

What's funny is that the list actually has nothing (directly/officially) to do with entrepreneurs — it's actually the description of someone who is hypomanic, a “medcial condition” a small step away from full blow mania and bipolar conditions, that the author suggests is one of the key characteristics that can prime a person for entrepreneurialism.

Anyway, we're off to the grocery store.

PS. The book is The Hypomanic Edge by John D. Gartner.

The evening's entertainment (coordinated by the great ORBAX) has been confirmed (as you can see by the shirt backing below). I'll go take pictures and post directions for the daytime meeting space later today and give everyone a full schedule and information! Sorry for cutting it so close. Watch for that here, and on the events page, and via broadcast.

Everyone (except PETA) loves it, right?

We had a family excursion out to Marineland today… I'd originally planned a trip out to the lake to go swimming but I think that'll end up being another day. Nefarious liked the dolphin, whale, and sea lion shows, but I think especially liked the rides. We went on some pretty crazy ones, starting with a kiddie coaster and working up to some two hundred foot tall spinning contraption!

We also fixed some weird bugs with the BME mailserver that may have been stopping larger emails (bigger than a few meg) from getting through. If you submitted over the last couple of weeks but didn't get a response, please do resubmit if you can.

BMEfest details in full will be posted tomorrow both on the event page and via broadcast. If you're coming, make sure you're signed up so you get that, and if you're not, make sure you're not on the list so we can get a good count. Other than that, I had a nice dinner (as always) at Fressen. If you're vegan and up for BMEfest and want to try probably the closest to “fine dining” you're going to get as a vegan (especially in a non-asian cuisine), check out Fressen on Queen.

More in the painting series

Again, drawn originally on the canvas by Nefarious, and painted by me. This one was drawn just before she turned three… I've just started working on it, painting the crack of sky — it's a bunch of monsters having a party inside a cave. I've been seeing more and more artists doing interpretations of children's paintings, but I don't think I've seen any that are direct (same canvas, same size, largely unaltertered and unembellished designs) like this? 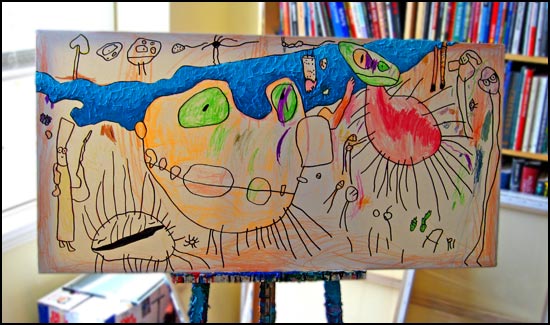 I don't know… I do have a BME-themed gallery show planned, but I think in about two years I'll have a large enough set of paintings that I'm happy enough with that I think I could do a gallery show of some success. I need to get an art agent for the first show soon to start shopping it around…

Anyway, I'm trying to get the video update posted still; I forgot that zip files break at 2 gig, so yesterday was a fruitless 2.5 gig upload! Tomorrow though I'm going to take a day off I hope, drive out to the lake, have a little picnic, and go swimming. Nefarious's car seat just barely fits in the back of the Porsche.

…they're so much better than normal people, right?

Check it out… At about a minute in you can see Rachel and Olivia in Rachel's Lotus Elise… I guess they drove that as far as Las Vegas and then switched to her (temporary) Ferrari 360. Oh, and if you didn't already know, this is from the start of the Player's Run 2006.